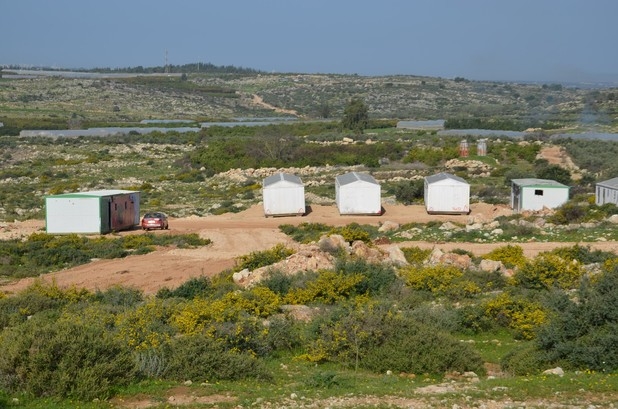 Israel continued its colonization of Palestinian land with the erection of a new settler outpost on the land of a West Bank village at the end of last month.

The Palestinian village of Jayyous is situated close to the town of Qalqilya. The new outpost of seven caravans was immediately connected to the water system of nearby settlement Zufim which was constructed with financial aid from Africa Israel’s owner Lev Leviev.

The settlers have erected the outpost in response to a lawsuit in which the farmers of Jayyous “regained” 6,200 dunums of the 8,600 dunums of fertile lands that were confiscated by Israel during the construction of the wall in 2002 (a dunam is 1000 square meters).

Ghassan Harami, head of Jayyous village council, told the WAFA news agency that the caravans were set up under the protection of the Israeli army. The land in the area was razed and the caravans were connected with electricity, according to Harami.

Caterpillar equipment paves the way for the new route of the illegal wall near Jayyous. (Mohammad Othman)

Meanwhile, Caterpillar equipment was used to uproot olive trees to pave the way for the new wall on the land of Jayyous. This construction is a violation of international law.

In 2004, the International Court of Justice confirmed in its advisory opinion on the wall that the Israeli settlements and the wall built on Palestinian land are unlawful. The court ruled that Israel should immediately stop the construction of the wall in the occupied West Bank, including in and around East Jerusalem, and to immediately dismantle the wall.

A farmer from Jayyous watching the destruction of his land to make way for the new wall (13 January). (Mohammad Othman)

The protests against the developments by the youth of Jayyous can be followed on this Facebook group.

Thanks to Mohammad Othman for his input.

Written by Adri Nieuwhof (Retrieved from The Electronic Intifada)