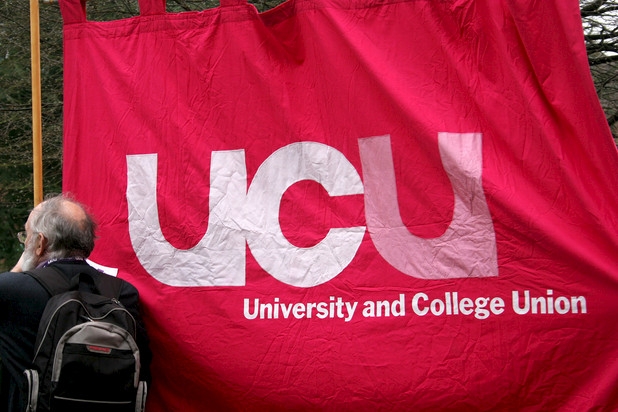 In October and November, a London court heard a case with potential consequences for the Palestine solidarity movement and for trade unions’ gradual adoption of the campaign for boycott, divestment and sanctions against Israel. – By Asa Winstanley

The director of Academic Friends of Israel is suing his own union in an employment tribunal. Ronnie Fraser accuses the 120,000-member-strong University and College Union of “institutional anti-Semitism” after its congress passed motions calling for members to discuss the Palestinian call to boycott Israeli universities.

But according to one court document seen by The Electronic Intifada, Fraser follows a definition of anti-Semitism that seems to include any criticism of Israel. It says he considers “anti-Semitism” to include comments “targeting specifically the State of Israel which was conceived as a Jewish state.”

The suit is part of a “lawfare” strategy that anti-Palestinian groups are resorting to, having effectively lost the debate around Israel boycott measures in the unions several years ago.

Sue Blackwell, a University and College Union activist and former national executive member who has been vocal in the boycott, divestment and sanctions campaign, said Fraser would lose because “there is not a shred of evidence” to support his claims. Even so, “he will have caused UCU a huge headache in terms of money and resources,” she said.

A judgment is not expected until March or April 2013, but The Electronic Intifada was in court in November to watch four days of the three-week hearing.

“Deliberately misleading”
The University and College Union was formed by a merger of two smaller unions in 2006. The two were the first unions in the UK to discuss a boycott of Israeli universities. So it’s no surprise to find anti-Palestinian groups attempting to fight the union with the usual tactics of bogus accusations of anti-Semitism.

Leading figures from pro-Israel groups testified in support of Fraser. They included Denis MacShane (a Labour Friends of Israel stalwart recently forced out of parliament over an expenses scandal), Jeremy Newmark of the Jewish Leadership Council, and several activists from Engage, a group created to combat boycotts of Israel from an ostensibly left-wing position.

Fraser’s team was led by Anthony Julius, a lawyer from high-flying firm Mishcon de Reya. In the 1990s he negotiated Princess Diana’s £17-million (then around $22.5 million) divorce settlement.

In court on 6 November, this writer was permitted to view the “amended grounds of defense” document submitted to the court by Antony White, the head of the union’s legal team.

Despite requests in person, on the phone and over email, Julius and his team failed to provide the “grounds of complaint” document, or any other material, to The Electronic Intifada.

However, the general grounds of the lawsuit were set out in a letter from Julius to the union’s secretary-general, and made available on Fraser’s website (Letter sent to UCU on behalf of Ronnie Fraser, 1 July 2011, Academic Friends of Israel website [PDF]).

The letter complained that “UCU is not a place that is hospitable to Jews” and that its “year-on-year anti-Israel boycott resolutions” offered proof of such hostility.

Long struggle over boycott
The issue of potential academic boycott of Israel has been ongoing in the union for years.

Several University and College Union motions have been passed that “encourage members to consider the moral implications of existing and proposed links with Israeli academic institutions” and to circulate to members the text of the Palestinian Campaign for the Academic and Cultural Boycott of Israel’s 2004 call to boycott Israeli academic institutions (see Motion 30: Composite: Boycott of Israeli Academic Institutions, UCU Congress 2007).

However, mainly because of a backlash engineered by pro-Israel pressure groups, the union has never taken solid practical measures to implement such a boycott.

Fraser’s suit claimed he had been “booed, jeered and harassed” while speaking at congress in 2007 when a motion to boycott Israel was introduced. Newmark of the Jewish Leadership Council claimed to have witnessed this, stating in court: “[it was] above and beyond the usual kind of rough-and-tumble debate.”

But Fraser, according to White, had not in fact spoken. He had tried to intervene, but was rebuffed by the chairperson. White said this was one of “a series of false allegations” in Newmark’s witness statement, and submitted an audio recording he said proved the chairperson was “scrupulously fair,” and that there was no booing.

Newmark said the microphones might not have picked up the booing, but insisted there was “an atmosphere” in the room.

On the final day in court, Julius argued that given how Fraser had decided to remain in the University and College Union he was “not quite the Last of the Mohicans,” but suffered fear, distress and “a certain panic” as a result of Israel boycott advocacy in the union.

Defending free speech
Congress 2011’s rejection at of a discredited “working definition of anti-Semitism” is considered by Newmark to have been the “tipping point” that led to this suit.

However, the union’s legal team, led by lawyers and full-time union officers, not by boycott, divestment and sanctions activists (none of whom were called as witnesses), asserts that this is a free speech case.

The union’s grounds of defense document quotes a 2010 Scottish ruling that a 2008 protest against the Jerusalem String Quartet in Edinburgh was not racist. The ruling emphasizes that protesters criticizing the state of Israel had been within their legal rights. Any other ruling would have violated free speech, the ruling argued: “Presumably, their placards would have to read, ‘Genocide in an unspecified part of the Middle East’; ‘Boycott an unspecified state in the Middle East.’”

The defense argues that the union’s differences with Fraser have been over his pro-Israel stance, as he was a “spokesperson” for the anti-boycott campaign, and have nothing to do with his religious identity.

Pattern of exaggeration
The union’s legal team head Antony White accused Fraser and some of his witnesses of false testimony. In his final submissions, he said they failed to engage with the facts. They showed a “consistent pattern of either exaggeration or misleading evidence,” said White, giving several examples.

One witnesses was David Hirsh, founder of the anti-boycott group Engage.

On 5 November, White put it to Hirsh that the Board of Deputies of British Jews and the Jewish Leadership Council “has been funding Engage to the tune of £50,000 [$81,335]” over three years. The Fair Play Campaign Group was used to channel this funding, according to Fraser’s evidence.

Hirsh denied this, as did Jane Ashworth, also with Engage, during cross-examination later the same day. Both said Fraser must have been mistaken. The following day, the Jewish Leadership Council’s Newmark also denied it.

Similar claims emerged in March, when a pro-Israel blogger complained the scheme was “deeply dishonest” and that Engage’s “credibility as a radical left group opposing the boycotters … would have been shot to shreds” if the Board of Deputies funding had been publicly known.

When The Electronic Intifada contributor Ben White discovered this in April, he put it to Newmark, who replied the blogger was “a bit ‘confused,’” but didn’t deny the substance.

Not “mainstream Jewish members”
Hirsh’s testimony involved a lot of long-winded speeches, causing Employment Judge A. M. Snelson, the tribunal’s chair, to prompt him more than once to keep his answers as short as possible.

Hirsh came very close to accusing Antony White himself of anti-Semitism during the hearing, saying of his line of questioning that “I think that’s a real problem” and claiming he represents an anti-Semitic union.

Engage’s Jane Ashworth has never been a member of the union, but claimed to have witnessed an anti-Semitic incident at the union’s 2008 congress.

She too came close to accusing White of anti-Semitism, saying she was concerned White was talking about “well-funded” groups. “Engage had no money from the FPCG [Fair Play Campaign Group]. Period,” she claimed.

White put it to her that Engage had promised the pro-Israel Board of Deputies to “engage with the left to get a successful result at congress.” In other words, to defeat moves for discussion of the Palestinian call for academic boycott.

White put to Ashworth another of the central points of his case: that Jewish union members had debated at congresses on both the pro- and anti-boycott sides. Differences with Fraser were political, not related to his ethnicity or religion.

Ashworth claimed that Jews who supported a boycott were not “mainstream Jewish members” of the union.

“You’ve just made that up”
The incident Ashworth claimed to have witnessed was intensely disputed.

Ashworth and Jeremy Newmark of the Jewish Leadership Council were at the 2008 union congress and had vendors’ passes, but were not delegates (or even members). So they were not supposed to be on the congress floor where debates and voting took place. She must have “sneaked in,” White put it to her.

She said Newmark, wearing a kippah (skull cap), was barred by union official Matt Waddup because he was identifiable as a Jew. She also claimed Waddup shoved her.

“You’ve just made that up,” White countered. Ashworth insisted she was telling the truth but, being inconsequential, she had not mentioned it before.

What really happened was quite different, White said. Newmark had tried to push his way in and, lacking the right credentials, Waddup had refused him entry.

Newmark from the Jewish Leadership Council took the witness chair on 6 November. “It’s very easy to resort to the stereotype of the pushy Jew, trying to push their way in” to the congress hall, he said, implying White was an anti-Semite.

Verdict expected spring 2013
Outside court, Antony White said he could not speak to journalists.

The judges are scheduled to meet in January to work on a draft verdict. They will meet again in February or early March, and the final judgment will be handed down 28 days later.

The verdict will be closely read by activists in Britain and beyond. The case is about an attempt to stifle freedom of expression and roll back the progress of boycott, divestment and sanctions in the unions.