Mali and the sandstorm of war 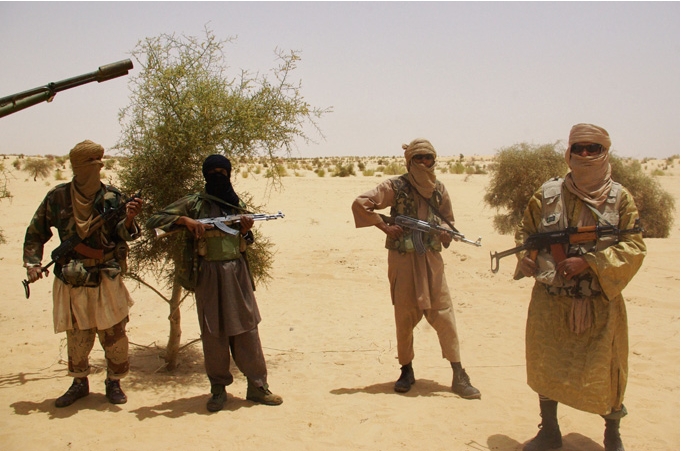 Trying to make sense of the Islamist advance southwards

Andy Morgan writes: The vastly conflicting accounts of victories, defeats, advances, retreats, casualties and captives that have come spewing forth from the mouths of the spokespersons on either side of the conflict in recent days illustrate the dire opacity of this conflict and the near impossibility for a journalist to find the copper-bottomed truth about what is going on.

A friend who works for Al Jazeera recently told me that in her honest opinion, the war in Northern Mali is the hardest conflict to understand in the world. Even obsessives like myself, who spend more time reading reports and analyses about the crisis or talking to people closely involved than is strictly healthy, have to admit that more often than not we are enveloped in a sandstorm of supposition and guess work.

Iyad Ag Ghali, emir of the Touareg lead Islamist militia Ansar ud-Dine.
Such is the case with the recent Islamist advance. I’ll give you my hunch, but it’s only a hunch. Short of trading my safe European home for a god-forsaken AQIM hostage camp in the Tegharghar mountains, I can’t do any better. My guess is that the Iyad Ag Ghali, emir of the Touareg lead Islamist militia Ansar ud-Dine has become impatient with the Burkinabé sponsored mediation process between Mali and the two ‘Malian’ rebel factions, the nationalist MNLA and Ansar ud-Dine, which has been dragging on for a few months. The resumption of these talks that was due to take place on January 10th has now been pushed back to January 21st. Algeria has also re-entered the fray as a mediator, a role which it considered its own almost by divine right before it was taken off them by Burkina Faso at the beginning of the rebellion last February. This has no doubt taken the wind out of the Ougadougou talks and confused matters considerably. Both Ansar ud-Dine and MNLA signed an agreement to cease hostilities and pursue negotiation with Mali in Algiers on December 21st. It’s this agreement which Ansar ud-Dine are now reneging upon.
The belligerent talk coming out of Bamako following the guarded approval given to a military intervention in the north by the UN in December undoubtedly angered Iyad Ag Ghali and his Touareg side-kicks. You can feel this anger in the tone of the Political Platform which Ansar ud-Dine posted on their website on January 2nd. What Iyad and his ghostwriter are saying, in grossly simplified terms is the following: “I trusted you (Mali) at the end of the rebellion of the 1990s. You betrayed my trust by reneging on your promises and fomenting ethnic war in the north. This was gross ingratitude considering that it was ‘my’ rebellion that enabled you to overthrow your military dictatorship and bring back multi-party democracy in 1992. Now, once again, you’re double-crossing me. You persuaded us to agree to a cease-fire and to renouncing the armed struggle while you were busy importing tanks from Bulgaria and talking about war day in day out. Well if you want war, you can have it.” Iyad, a wily old jackal if ever there was, is no doubt gambling on the fact that the Malian army is too weak to offer any great resistance to his mujahedeen. He also knows that if he were to capture Mopti, the pressure this would then heap on the military junta and its political puppets in Bamako would be so immense that even if his Islamist army couldn’t hold such a large and hostile city for long, it might just afford him the time and strength to push through his demands for an autonomous Azawad modeled on the Autonomous Region of Kurdistan in northern Iraq. It’s a high stakes game but that’s nothing new. Ever since he launched the rebellion of 1990 with a handful of men and a few old Touareg swords, Iyad has proven himself to be a high-stakes player, at least in military terms.

The guessing game becomes even more enthralling when one tries to work out what’s happening within the Islamist coalition itself. There have been significant changes in the last few months, but owing to the standstorm of war it’s been extremely hard to make any sense of them. First the old desert fox, ‘Mr Marlboro’, Moktar Belmoktar was given his marching orders by the MUJAO command in Gao. Was his old adversary Abou Zeid, head of AQIM in Timbuktu, just too sick and tired of him? Was Belmocktar sick and tired of the more brutal and zany behaviour of the MUJAO chiefs in Gao? Was he just piqued that the emirship of Al Qaida in the Sahara was handed over to Yahya Abou El Hamam rather than to him? Who knows. After Belmoktar’s departure, there has been further splintering or atomizing of the Islamist movement, generally along ethnic lines.