Practicing apartheid and proud of it 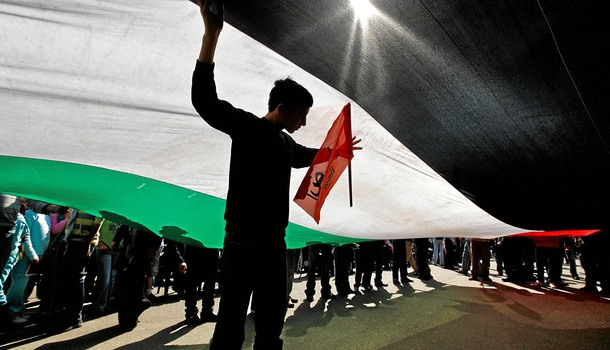 Practising apartheid — and proud of it

Israelis like the idea of democracy, but openly advocate discrimination against Arab citizens. How can people embrace a word synonymous with evil?

Slowly the term apartheid is penetrating the Israeli discourse. It first came from the outside when international human rights activists made comparisons between the Israeli military regime in the occupied territories and the apartheid regime in South Africa. But, in the past few months, these similarities have been discussed also in Israel. That is good news.

A poll, conducted by the Israeli survey institute Dialog and the Yis­raela Goldblum Fund and published last week in the Israeli daily Haaretz, revealed some very worrying trends in Jewish Israeli society: it has become more nationalistic and it even holds racist attitudes about Israeli Arab citizens and the Palestinians in the occupied territories.

One-third of the Jews in Israel want a law that would prevent Arab citizens from participating in elections for the Knesset, the Israeli parliament; 59% want Jews to be given preference for jobs in government ministries; 49% want the state to treat Jewish citizens better than Arabs; 42% do not want an Arab neighbour in their building or an Arab pupil in their children’s class at school; 58% believe that Israel already discriminates against Arabs (although the occupied West Bank has not been annexed to Israel); 39% think there is apartheid in a “few issues” and 19% in “many issues”; only 31% think that there is no apartheid in Israel at all.

Thirty-six percent think that the boycott of South Africa brought an end to the apartheid regime, whereas 34% think that the boycott had no influence on it. Only 38% of Israelis support the annexation of the occupied West Bank, but a very large majority, 69%, object to giving the 2.5-million Palestinians in the West Bank the right to vote if Israel annexes the territory.

Only 19% are in favour of the Palestinians voting as equal citizens in the case of an annexation. Finally, 74% of the Jewish citizens of Israel support the separate roads for Israelis and Palestinians in the West Bank – one-third think that this is “a good situation” and 50% believe it is “a necessary situation”. Only 17% want the separation to be brought to an end.

The findings of the poll in no way came as a surprise; previous surveys have exposed similar anti-Arab, ultra-nationalist sentiments among a majority of the Israeli Jews. The occupation, which has been in existence for more than 45 years and deprives Palestinians in the West Bank of their civil rights, is well established in Israel and is rarely questioned or challenged – and neither is the discrimination against the 1.5-million Arab citizens of Israel.

Most Israelis seem indifferent, or even blind, to what is happening in their dark back yard, half an hour away from their homes, beyond the green line, the pre-occupation border. The media deal little with the occupation and systematically dehumanise and demonise the Palestinians.

Given the reality, making peace with the Palestinians would be an almost antidemocratic act. Most Israelis do not want it. A just, egalitarian society would also violate the wishes of most Israelis. That, too, is something they do not want. They seem to be satisfied with their racism, comfortable with the occupation, pleased with the apartheid. Things are very good for them in this country. That is what they told the pollsters.

It is hard to blame the Israelis. Years of brainwashing and vicious terror have left their scars. Never­theless, the indoctrination does not absolve the Israelis of responsibility. It is true that the education system and, even more so, the media incite and enflame, sow hatred and fear, but they do so to accommodate their audiences’ tastes and please them. It is a depressingly vicious circle in which it is not clear which came first.

Is Israel an apartheid state? Can the occupation be compared to the apartheid system? A few years ago, I accompanied a delegation of South African human rights activists and lawmakers who visited Israel and the occupied territories. We spent a whole day together in the West Bank, mainly in the refugee camp Balata, in the Palestinian city of Nablus, visiting private homes and meeting activists. At the end of the day I raised the questions mentioned above with the members of the delegation. I remember one answer, which I carry with me to this day: “The Israeli occupation is much worse.”

Comparing the military tyranny in the West Bank to the apartheid regime in South Africa does leave room for obvious differences. Most importantly, there is no official racist ideology or legislation in Israel. But the reality of suppression, discrimination, separation, lack of equality, lack of human rights, lack of civil rights and lack of basic freedoms in the occupied territories cannot be denied by anyone, whether one calls it apartheid or brutal occupation.

The latest poll added only one new dimension, not necessarily a negative one: the Israelis are starting to admit that this is the way they are. They say so without being ashamed. Gideon Levy is a columnist for the Israeli daily Haaretz