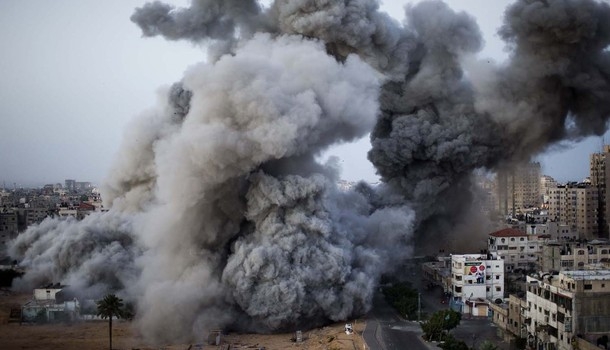 The support of the US and Britain allows Israel to continue its policy of occupation and aggression, says Seumas Milne.

The way Western ­politicians and media have pontificated about Israel’s onslaught on Gaza, you would think it was facing an unprovoked attack from a well-armed foreign power. Israel had every “right to defend itself”, Barack Obama declared. “No country on Earth would tolerate missiles raining down on its citizens from outside its borders.”

He was echoed by Britain’s foreign secretary, William Hague, who declared that the Palestinian Islamists of Hamas bore “principal responsibility” for Israel’s bombardment of the open-air prison that is the Gaza Strip. Meanwhile, most Western media have echoed Israel’s claim that its assault is in retaliation for Hamas rocket attacks; the BBC speaks wearisomely of a conflict of “ancient hatreds”.

In fact, an examination of the sequence of events over the past month shows that Israel played the decisive role in the military escalation: from its attack on a Khartoum arms factory reportedly supplying arms to Hamas and the killing of 15 Palestinian fighters in late October to the shooting of a mentally disabled Palestinian in early November, the killing of a 13-year-old in an Israeli incursion and, crucially, the assassination of the Hamas commander Ahmed al-Jabaari last Wednesday during negotiations over a temporary truce. Israel’s prime minister, Benjamin Netanyahu, had plenty of motivation to unleash a new round of blood-letting. There was the imminence of Israeli elections (military attacks on the Palestinians are par for the course before Israeli polls); the need to test Egypt’s new Muslim Brotherhood president, Mohamed Morsi, and pressure Hamas to bring other Palestinian guerrilla groups to heel; and the chance to destroy missile caches before any confrontation with Iran and test Israel’s new Iron Dome anti-missile system.

So, after eight days of sustained assault by the world’s fourth-largest military power on one of its most wretched and overcrowded territories, at least 162 Palestinians had been killed, an estimated half of them civilians, along with five Israelis. The goal, insisted Israel’s interior minister, Eli Yishai, had been to “send Gaza back to the Middle Ages”.

True, the bloodshed has not so far been on the scale of Operation Cast Lead in 2008-2009, which left 1 400 Palestinians dead in three weeks. But the issue is not just who started and escalated it, or even the grinding “disproportionality” of yet another Israeli military battering (even before last month’s flare-ups, 314 Palestinians had been killed since 2009, against 20 Israelis).

Rather, the issue is to portray Israel as some kind of victim with every right to “defend itself” from attack from “outside its borders” is a grotesque inversion of reality. Israel has, after all, been in illegal occupation of both the West Bank and Gaza, where most of the population are the families of refugees who were driven out of what is now Israel in 1948.

Despite Israel’s withdrawal of settlements and bases in 2005, the Gaza Strip remains occupied, both in effect and legally – and is recognised as such by the United Nations. Israel is in control of Gaza’s land and sea borders, territorial waters and natural resources, airspace, power supply and telecommunications. It has blockaded the strip since Hamas took over in 2006-2007, preventing the movement of people, materials, and food supplies in and out of the territory. And it continues to invade the strip at will.

So, Gazans are an occupied people and have the right to resist, including by armed force (although not to target civilians), whereas Israel is an occupying power that has an obligation to withdraw, not a right to defend territories it controls or is colonising by dint of military power.

Even if Israel had genuinely ended its occupation in 2005, Gaza’s people are Palestinians and their territory is part of the 22% of historic Palestine earmarked for a Palestinian state that depends on Israeli withdrawal from the occupied West Bank and east Jerusalem. Across their land, Palestinians have the right to defend and arm themselves, whether they choose to exercise it or not.

Israel impunity
But instead the US, Britain and other European powers finance, arm and back to the hilt Israel’s occupation, including the siege of Gaza, precisely to prevent Palestinians from obtaining the arms that would allow them to protect themselves against Israeli military might.

It is hardly surprising, of course, that powers that have themselves invaded, occupied and intervened across the Arab and Muslim world over the past decade should throw their weight behind Israel doing the same thing on its own doorstep. But it is not Palestinian rockets that stop Israel from lifting the blockade, dismantling its illegal settlements or withdrawing from the West Bank and Gaza, it is the unconditional US and Western support that gives Israel impunity.

Whatever the Israeli government’s mix of motivations for winding up the past week’s conflict, it seems to have backfired. For the first time since the start of the Arab uprisings, the cause of Palestine is again centre stage. Emboldened by the wave of change and growing support across the region, Hamas has also regained credibility as a resistance force, which had faded since 2009, and strengthened its hand against an increasingly discredited Palestinian Authority leadership in Ramallah. The deployment of longer-range rockets, which have now been shown to reach Tel Aviv and Jerusalem, has also begun to shift what has been a one-sided balance of deterrence.

Although a ceasefire took hold on Thursday, deep mistrust on both sides casts doubt on how long the Egyptian-sponsored deal can last.

Quiet reigned on both sides of the frontier on Wednesday night and during the morning after a dozen rockets landed in Israel in the initial hours after the truce came into force late on Wednesday. Israeli police said there had been no casualties or damage.

The deal brokered by Egypt’s new Islamist government, working with the United States, prevented – at least for the moment – an Israeli invasion.

Any relief from the bombardment, death and suffering of the past week has to be welcomed. But no ceasefire is going to prevent another eruption of violence. Whatever is finally agreed will not end Israel’s occupation and colonisation of Palestinian land or halt its war of dispossession against the Palestinian people. That demands unrelenting pressure on the Western powers that underwrite it to change course. – © Guardian News & Media 2012