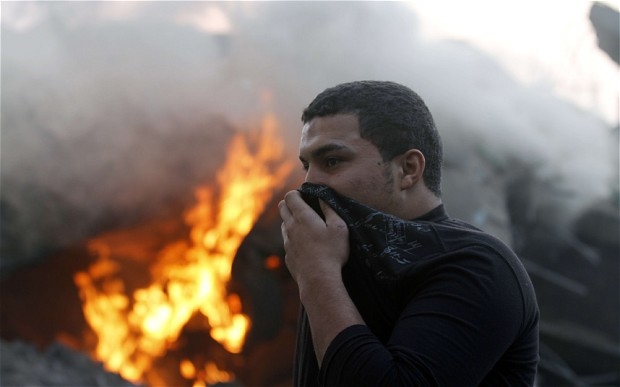 It cannot be doubted the turning-point in Israel’s latest murderous rampage.

At that moment Netanyahu stood exposed in all his nakedness.

The bluff had been called.

Only the ninth-rate hacks at the New York Times preserved until the last second the fiction that the IDF still stood poised for an offensive. Isabel Kershner, the ex-beautician from Sderot Coiffures, whose only known scholarly work is The Complete History of Mah Jong Tournaments in the Catskills, dutifully repeated the party line that Netanyahu held back on the ground offensive because he of course preferred a diplomatic solution.

Israel couldn’t attack because the population won’t accept any IDF casualties, while the presence of foreign journalists and the honor of Egypt and Turkey prevented Israel from fighting in its usual style: the scorched-earth destruction of everything and everyone in its path, no questions asked.

The 2006 Lebanon War ended when Hezbollah escalated its rocket attacks on Israel’s heartland, while Israel dreaded the prospect of a ground invasion on the terrain of the Party of God. So, Israel called on the U.S.to bail it out and Secretary of State Condoleezza Rice engineered a U.N. resolution, which she had blocked during the first weeks of the Israeli massacre–or, what this Witch from the Pits of Hell called the “birth pangs of a new Middle East.”

This time it’s Scarecrow Secretary of State Hillary Clinton who is flying in to rescue Israel from another debacle, as Hamas escalated its–albeit, largely symbolic–retaliatory strikes.

It’s unlikely that Palestinians will win much in the ceasefire–the interests of Egypt, Turkey and Qatar, on the one hand, and the Palestinians on the other, diverge more than they converge.

But still, the IDF’s Achilles heel has once again been revealed, and consequently, although Tel Aviv’s proclaimed goal in launching the attack on Gaza was to enhance its “deterrence capacity”–i.e., its capacity to terrorize the Arab/Muslim world into submission–in fact, under the supremely stupid leadership of Netanyahu and Defense Minister Ehud Barak, Israel emerges with a diminished deterrence capacity.

No doubt, these Draculas are thrilled at the sight of the rubble and corpses in Gaza.

But they cannot be pleased that all the world now knows just how cowardly they are.

In the end, notwithstanding its super-space-age arsenal of death, the IDF trembled at the prospect of engaging the weaponless men, women and children of Gaza.

It was a prudent move on Netanyahu’s part.

The Ubermenschen of Israel’s Wehrmacht would probably have been slaughtered.