26 Incredibly Powerful Images Of Eid Al-Fitr 2013, And What They Say About The World Today 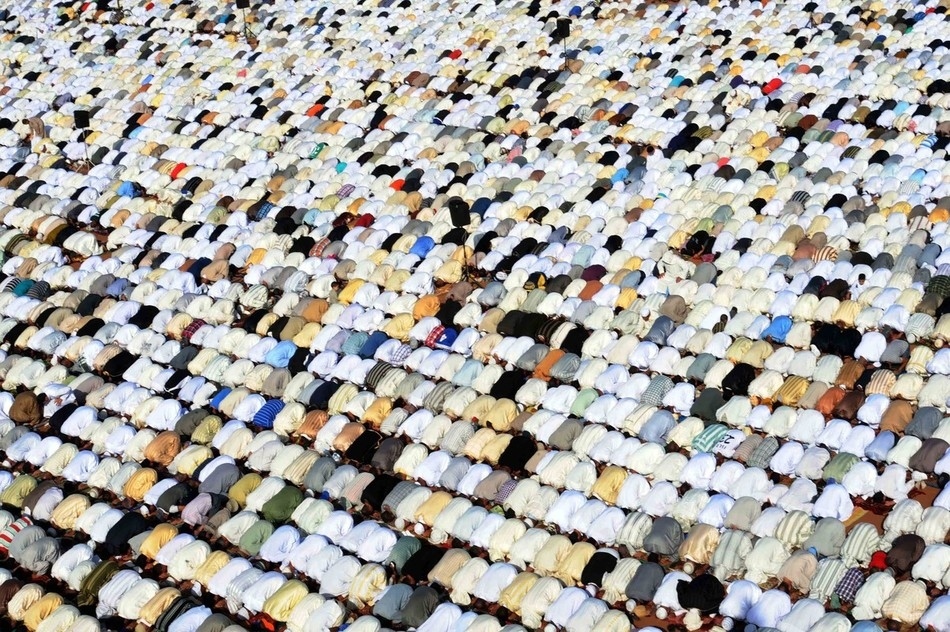 The festival of Eid al-Fitr is celebrated by Muslims around the world. It marks the end of Ramadan, the holy month of fasting and praying.

A boy is seen during a morning prayer session to celebrate Eid al-Fitr at the Santa Maria La Antigua University car park in Panama City.

A boy plays in the Hittin Palestinian refugee camp near Amman during Eid celebrations.

Hafiz Mohammad Saeed (L), leader of the banned Lashkar-e-Taiba militant group with suspected links to the 2008 terror attacks in Mumbai, India, delivers his sermon after Eid al-Fitr prayers at the Gaddafi stadium in Lahore.

He tweeted: “Time is near when those oppressed in Kashmir, Palestine and Burma will celebrate ‘Eid’ in the air of Freedom – Insha’Allah.”

Chinese Muslims enjoy festive foods as they celebrate Eid al-Fitr at a mosque in Zibo, in eastern China’s Shandong province.

Indian homeless men wait to receive free food distributed outside a mosque ahead of Eid al-Fitr in New Delhi, India.

Palestinians and Israelis enjoy the Mediterranean sea during the first day of the Eid al-Fitr holiday in Tel Aviv, Israel.

A vigilante man provides security in Maiduguri, northeastern Nigeria. Around 10,000 Nigerians celebrated Eid al-Fitr with devout prayers and a joyful show of adulation for their king.

It was the first durbar in three years in the city of Maiduguri and the joy that it could take place – albeit amid massive security – was heard in the cries of ululating women, screams of delight from children and men chanting “Long live the king!”

People pray on the first day of Eid-al-Fitr in Sale, northwest Morocco.

A child is carried by his mother at a market on the eve of Eid al-Fitr festival in Srinagar.

Indian Hindu protestors shout slogans against the state government after rival communities attacked each other with stones and sticks, and burned several shops and vehicles during Eid celebrations near Srinagar, the main city in Indian-controlled Kashmir.

Indian forces imposed an indefinite curfew in a town in the Indian portion of Kashmir after firing tear gas and warning shots to disperse the rival groups of Muslims and Hindus.

Muslims embrace each other after taking part in Eid al-Fitr prayers at a mosque in Brooklyn, New York.

Pakistani policemen carry an injured colleague into a hospital in Quetta following a suicide bomb attack during a police officer’s funeral on the eve of Eid al-Fitr.

The attack killed 38 people and wounded more than 50 others.

A Pakistani beautician paints a foot of a customer with henna ahead of Eid al-Fitr in Karachi, Pakistan.

A woman and girl sit in the shade in Burgess Park during an Eid celebration fun fair in London, England.

A young Chinese Hui Muslim boy watches as people receive blessings from an imam at the historic Niujie Mosque in Beijing during the Eid al-Fitr holiday.

Muslim boys stand on a pedestal at Jama Masjid mosque in New Delhi as they prepare to pray on Eid al-Fitr.

A Kashmiri man carries an injured woman during a clash between protestors and Indian police officials after Eid prayers in Srinagar, part of Indian Kashmir.

At least 30 people including 20 police were injured in the clashes.

A girl has her face decorated as Muslims celebrate Eid al-Fitr in Valby, Copenhagen.

Members of the Muslim brotherhood and thousands of supporters of ousted Egyptian President Mohammed Morsi celebrated Eid al-Fitr, defying government calls for them to leave the streets of Cairo, Egypt.

Muslims exchange wishes and blessings after their morning prayer during the Eid in Malacca, Malaysia.

Women take a selfie before the start of the Eid prayer inside the Jackson Sports Academy at McClellan Park Thursday in Sacramento, Calif.

Afghan men carry a coffin towards a funeral ceremony after an explosion killed around 14 women in a graveyard in eastern Afghanistan, as the country celebrated the Eid al-Fitr holiday.

A boy attends prayers for the Eid al-Fitr holiday at the Parc Chanot exhibition centre in Marseille.

A customer displays her hands styled with mehendi (henna) during ‘Chand Raat’ or ‘Night of the Moon’ in Hyderabad, India, on the eve of Eid al-Fitr.