The war drive against Syria 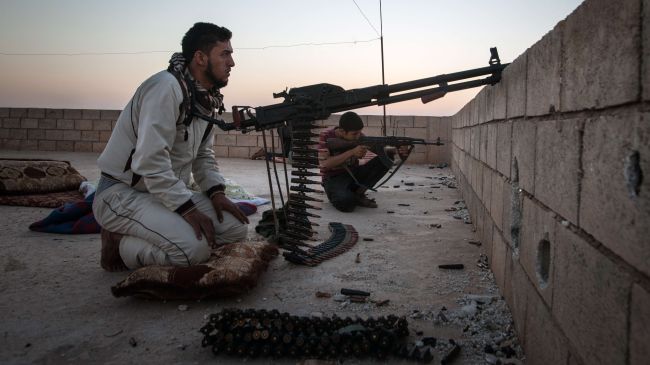 Ten years after the US government went to war in Iraq on the basis of lies about nonexistent weapons of mass destruction (WMD), a no less grotesque provocation is being concocted by Paris, London, and Washington to justify a new war of aggression against Syria.

The allegations that the regime of Syrian President Bashar al-Assad carried out mass chemical weapons attacks last Wednesday in Ghouta, near Damascus, lack any credibility.

The Assad regime has no motive to carry out such an attack. Until Wednesday, its forces were handily defeating the US-backed opposition militias without using chemical weapons. Due to their lack of popular support and the repeated defeats they have suffered, the opposition is disintegrating into bands of looters and murderers—a state of affairs confirmed by Al Qaeda-linked opposition forces’ declaration that after the Ghouta attack, they will kill any member of Assad’s Alawite faith they capture.

Allegations that Assad used chemical weapons serve only one purpose: to give Washington and its allies a pretext to attack Syria, which they have repeatedly threatened to do if a chemical attack by the regime occurred. If a chemical weapon attack did take place in Ghouta, François Hollande, David Cameron, and Barack Obama know far more about its execution than does Bashar al-Assad.

Before any proof of a chemical attack had emerged, and before any investigation had even begun—indeed, in less time than police departments take to issue an indictment in a routine street crime—French and British officials were calling for war with Assad. The day after the alleged attack, French Foreign Minister Laurent Fabius insisted that “force” was the only appropriate response.

Obama administration officials even said that they did not want a UN investigation or the collection of evidence before proceeding with their war plans. They told the New York Times yesterday that, with target lists for US strikes in Syria already circulating at the White House, they were “determined not to be drawn into a protracted debate over gaining access for United Nations investigators, because of doubts that they could now produce credible findings.”

The Obama administration’s claims that it is going to war because it is concerned that a “red line” of chemical weapons use has been breached is utterly fraudulent. It does not intend to investigate what occurred in Ghouta. Rather, it wants to obtain a pretext for war that it can present as “credible” to the media, to justify military action that it intends to pursue regardless of whether the Assad regime used any chemical weapons.

Paris, London, and Washington are rushing into a war with far-reaching implications. US guided missile destroyers are heading to the eastern Mediterranean to get in position to strike Syria, and military planners are preparing a massive bombing campaign and stepped-up weapons shipments to Islamist opposition militias in Syria. They are dismissing blunt warnings by Syria’s allies, Iran and Russia, that a US attack on Syria will have dire consequences throughout the region.

The geostrategic and economic interests driving war preparations against Syria were spelled out in a long statement by one of US imperialism’s leading strategists, Anthony Cordesman of the Center for Strategic and International Studies, issued two days after the alleged chemical attack.

He wrote, “If Bashar al-Assad wins or survives in ways that give him control over most of Syria, Iran will have a massive new degree of influence over Iraq, Syria, and Lebanon in a polarized Middle East divided between Sunni and Shi’ite and steadily driving minorities into exile. This will present serious new risks for an Israel that will never again be able to count on a passive Assad. It will weaken Jordan and Turkey and, most importantly, give Iran far more influence in the Gulf. BP estimates that Iraq and Iran together have nearly 20 percent of the world’s proven oil reserves, and the Middle East has over 48 percent.”

To achieve the objective of removing all impediments to their control over the vast oil reserves of the Middle East, the imperialist powers, led by the United States, would gladly organize the deaths of hundreds of thousands of Syrians, just as they did in Iraq.

There is deep opposition in the working class in the United States and Europe to being railroaded into another war for oil and geopolitical advantage. One Reuters/Ipsos poll published Saturday shows that only 9 percent of the US public supports US intervention in Syria, and only 25 percent would support it even if it were proven that Assad had used chemical weapons.

Well aware of this public sentiment, the American and European media say nothing of the interests underlying the war plans and subject none of the Islamist opposition’s accusations to critical examination, even though it is well known that these forces have ties to Al Qaeda and routinely lie to the press. The stench of lies surrounds this latest operation by a state-controlled media to roll out a pack of WMD lies to justify yet another war of aggression.

As for the imperialist powers’ claims that they are attacking Syria out of a humanitarian urge to protect Syrian civilians, these statements deserve nothing but contempt. They are moving to start another bloody war only days after sanctioning the slaughter of thousands of unarmed protesters by Egypt’s US-backed military junta.

Workers and youth must oppose the war that Washington and its allies are threatening to unleash in Syria. Until they are stopped by a movement of the working class, the imperialist powers will go well beyond war with Syria in pursuit of the agenda outlined by Cordesman. Besides the countries already devastated by fighting spilling over from Syria, such as Lebanon and Iraq, the imperialist powers have Iran, and ultimately Russia and China, in their sights.