Colin Powell: US should back away from Syria 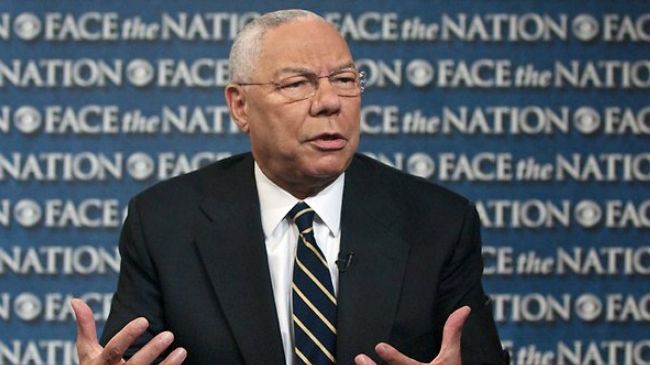 Share this on WhatsApp
Former US Secretary of State Colin Powell has urged Washington to stay away from the conflict in Syria and not take any sides.
Speaking on CBS News on Sunday, Powell said the situation in Syria was beyond the capability of the US to influence to any significant extent as Washington has recently ratcheted up its war rhetoric on Damascus.

“We shouldn’t go around thinking that we can really make things happen,” said Powell.

While he acknowledged that he had “no affection” for Syrian President Bashar al-Assad, Powell said Syria’s foreign-backed opposition forces do not seem to be much of a choice for Washington.

“What do they represent? And is it becoming even more radicalized with more al-Qaeda coming in? And what would it look like if they prevailed and Assad went? I don’t know,” he said.
Powell’s remarks come after US officials ratcheted up their war rhetoric on Syria following claims by Syria’s foreign-backed opposition on Wednesday that the Syrian government used chemical weapons on militant strongholds.

The Syrian government and the army categorically rejected the allegation, saying the foreign-backed militants had carried out the attack.

On Sunday, US Secretary of Defense Chuck Hagel said the Pentagon has prepared “options for all contingencies” in Syria and is ready to use force if President Barack Obama gives the green-light.

Meanwhile, Obama met with his national security team at the White House early on Saturday to discuss reports of the chemical attack in Syria and elaborate on a response.

The US Navy is also pre-positioning four destroyers in the eastern Mediterranean Sea and is moving its forces closer to Syria in anticipation of a possible order for airstrikes by President Obama.

On Sunday, an unnamed White House official said there is “very little doubt” that the Syrian government used a chemical weapon against militants even before UN inspectors visit the site of the alleged chemical attack in Syria.

The Syrian Foreign Ministry announced on Sunday that Damascus has given the green light to the UN team of chemical weapons inspectors to investigate the site of the alleged chemical attack and the UN team should start its investigation from Monday.

A new poll conducted by Reuters/Ipsos has found that about 60 percent of Americans believe the US should not get militarily involved in the Syrian conflict, as opposed to only nine percent who said Washington should act.