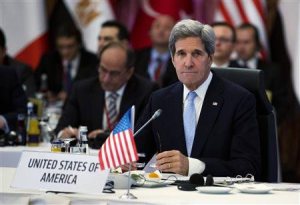 Yesterday US Secretary of State John Kerry appeared on national television to deliver a lying statement aimed at preparing public opinion for an impending US-NATO attack on Syria. It was his very own “Colin Powell moment.”

On February 5, 2003, Powell, then the Secretary of State in the Bush administration, made an infamous presentation before the United Nations. For two hours, armed with photos, graphs, and audio tapes, the chief diplomatic officer of the United States made the case for war against Iraq. He claimed that the evidence he presented showed that Iraq had weapons of mass destruction (WMD), which it was about to unleash on the world.

The media and politicians of both parties hailed Powell’s performance, declaring that the former general had made an overwhelming case that Iraq had enormous WMD programs. Six weeks later, bombs fell on Iraq as the US invasion began.

Powell’s speech was a pack of lies. Not one of his claims about yellowcake uranium from Niger, aluminum tubes, or mobile weapons labs was true. At the time, the WSWS wrote that the brief for war was “a diplomatic charade laced with cynicism and deceit… predicated on a colossal lie: that the coming invasion is about Iraqi weapons of mass destruction and Baghdad’s supposed threat to US security and world peace.” And so it proved to be.

The speech ten years later by Kerry was no less dishonest, no less cynical. Indeed, by comparison, Powell’s presentation was a masterpiece of detail.

Kerry’s entire case against the Syrian regime consisted of a general moral denunciation of chemical weapons. Describing “gut-wrenching images” of casualties from the alleged chemical weapons attack on Ghouta, he said: “The indiscriminate slaughter of civilians, the killing of women and children and innocent bystanders, by chemical weapons is a moral obscenity.”

The United States government and its allies in Britain, France, and Germany are in no position to lecture the world on the “moral obscenity” of chemical warfare or anything else. A complete documentation of the war crimes and atrocities carried out by American and European imperialism would fill many volumes.

Washington has poisoned entire Iraqi cities with depleted uranium and white phosphorus. Earlier, it dropped 75 million liters of Agent Orange—a chemical weapon—on Vietnam, affecting millions of people. The US is the one country in the world that has used nuclear weapons on defenseless cities—not once, but twice, on Hiroshima and Nagasaki. Together with the European imperialist powers—who pioneered the use of poison gas—they are collectively responsible for the deaths of millions of people.

While invoking the “moral obscenity” of indiscriminate killings with chemical weapons, the Obama administration continues to fund the Egyptian military junta, which over the last month has slaughtered thousands of unarmed protesters in the streets.

Kerry could not present a single fact, beyond his own lurid allegations, to justify the claim that Syrian President Bashar al-Assad’s forces carried out a chemical attack in Ghouta.

Such arguments prove nothing. Though Kerry preferred not to mention it, it is well known that US-backed opposition militias have access to chemical weapons and have used them. Opposition groups have posted YouTube videos bragging of their ability to manufacture poison gas, and UN officials have repeatedly stated that investigations inside Syria showed that opposition forces, not the Assad regime, were responsible for previous chemical attacks.

The CIA, which has been transformed into a heavily-armed global paramilitary organization, has access to such weapons and could easily make them available to the opposition.

Kerry’s claim that his accusations against Syria are grounded in “common sense” is false: common sense, applied to the situation in Syria, leads one precisely to the opposite conclusion.

The opposition is on the run, losing the war; their only hope is massive military intervention by their backers in the US, Europe, and the Middle East. The chemical weapons attack—previously described as a “red line” by the Obama administration—provides the desired pretext for this intervention.

In another remarkable statement, Kerry gave a back-handed acknowledgment that Washington does not intend to offer proof of its allegations against Assad. He stated, “as Ban Ki-moon said last week, the UN investigation will not determine who used the chemical weapons, only whether such weapons were used, a judgment that is already clear to the world.” That is to say that, regardless of what the investigation shows about the identity of the attackers, Washington will seize upon it as a pretext to attack the Syrian government.

After demanding that Syria allow “unrestricted” access to investigate the alleged attack, Kerry responded to the government’s acquiescence to this demand by declaring that it doesn’t matter anyway, since it was “too late to be credible.” All the demands are simply intended to pave the way for war. Short of opening up the country to foreign occupation, there is nothing the government could do to satisfy the ultimatums of US imperialism.

Only months after his 2003 speech on Iraq, it was clear that Powell had lied through his teeth. In the months ahead, Kerry, the one-time anti-Vietnam war protester, will also be caught up by the web of lies underlying the US war drive against Syria.