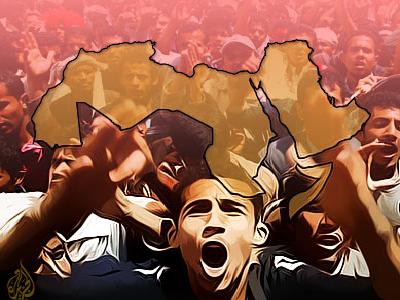 Until joined by the Islamic government in 1979 and then by Hizbullah in the 1980s, Syria was Israel’s most visceral enemy.  This enemy is now being destroyed but not by Israel. So-called Muslims backed by so-called Muslim governments – Saudi Arabia, Qatar and Turkey – are doing the job for it, in alliance with the traditional western enemies of the Arabs. Syria’s cities and towns have been devastated. An estimated 100,000 people have been killed. Millions more have been displaced, scattered across Syria or seeking refuge beyond its borders. Reconstruction will cost hundreds of billions of dollars. Recovery will take decades. Without spending a penny or losing a life, Israel has been handed one of the greatest strategic victories in its existence.

Michael Oren let the scarcely concealed cat out of the bag the other day when he said Israel would prefer a Syria without Bashar al Assad to a Syria in the hands of the jihadists. The outgoing Israeli ambassador in Washington, Oren was only bringing something to the surface that could be seen underneath it despite the vociferous denials of Israel’s lobbyists. Israel wants the government in Damascus destroyed. Netanyahu has been trying to hide its interest behind a mask of indifference but as the likelihood of a US military ‘strike’ – for a war that would engulf the region – slipped away, the lobbyists in Washington broke cover. They buttonholed every congressman and women, only for the vote on war to be postponed indefinitely, much to their chagrin of the gulf and Turkish governments, their armed and political protégés and the Israeli government.

While the Syrian army continues to grind the armed groups down, there seems no end to the volume of money, armaments and men outside governments are still prepared to pour into this conflict. Obama is still trying hard to get Russian agreement on a UNSC resolution that would allow the US to begin another war in the Middle East by attacking Syria. In the meantime the armed groups are continuing with the war they are waging. In his recent interview with former US congressman Dennis Kucinich and Fox news correspondent Greg Palkot, Bashar al Assad estimated that 80 to 90 percent of the armed men are Al Qaida-type takfiri jihadists. The ‘defence’  consultancy HIS- Janes puts the figure at about 50 per cent but whether it is 50 per cent or 90 cent, whether they are foreign or Syrian, the  jihadists are dominating the fighting.  Talk of moderates is deception. Only in the last few the days the main fighting groups – all takfiri – have again rejected the authority of the exile Syrian National Coalition and the so-called Free Syrian Army. This is presented as something new when at least a year ago the very same groups issued the same kind of declaration saying the same things. The so-called FSA is the western standard bearer for ‘moderation’ in this struggle even though its brigades are every bit as fanatical as Jabhat al Nusra or any of the other takfiri groups.

If the Syrian government does fall – and at the moment it is not only holding its ground but steadily driving the takfiris back – chaos would prevail in Syria on a far greater scale than Libya at present or Algeria in the 1980s.  The country would implode. This is so self-evident that the US and its allies must know it and if they know it, one has to presume that this is what they want. Saudi Arabia is out to destroy the Syrian government regardless of the consequences. Britain and France are following the US and US policy on any issue in the Middle East is largely fashioned according to the interests of Israel. Turkey is the odd man out. Whatever Recep Tayyip Erdogan thought he was going to get out of confronting Syria his own country has been very adversely affected by his decisions. The breakdown of Arab states into sectarian enclaves permanently at war with each other has been an Israeli strategic objective for decades.  It has happened in Iraq and now the specter of the collapse of another unitary Arab state hovers over Syria.

While the takfiris do their best to destroy Syria, Israel is getting on with the colonization of Palestinian territories as fast as it can. The current wave of settlement expansion is the greatest since 1967.  In the past year edicts have been pouring out of the Housing Ministry authorizing the construction of thousands of housing ‘units’ in East Jerusalem and across the West Bank.   The strategic focus is on settlement expansion in and around East Jerusalem and the construction of highways and roads that will simultaneously integrate the settlements into the greater Jerusalem municipality (enlarged immediately after the 1967 war) and, along with the Separation Wall, further cut the Palestinians off from the city. In the first quarter of 2013 alone there was a 176 per cent increase in settlement expansion over the same quarter for 2012.

In August this year, just as the ‘peace talks’ were resuming, Israel announced the construction of   thousands more housing ‘units’ in East Jerusalem settlements. The mainstream media tells us that settlement expansion is ‘impeding’ peace, ‘threatening’ the peace talks and the ‘two state’ solution.  The plain fact is that there are no ‘peace talks’. They are the camouflage for the war Israel has been waging against the Palestinians for seven decades. To their discredit and dishonor Mahmud Abbas and Saib Urayqat are giving these ‘talks’ a Palestinian face. By announcing settlement construction in the same breath as announcing the resumption of ‘peace talks’ Israel shows its absolute contempt for both of them.

Land expropriation and development for agricultural purposes continues unabated. So does the theft of water. The Council for European Palestinian Relations estimated recently that the settlers consume an average of 280 liters of water a day compared to 86 liters for the Palestinians, below the World Health Organization’s recommended minimum of 100 liters. Only 60 per cent of the water allocated to the Palestinians is potable. While taking their land Israel simultaneously uses it as a rubbish dump, with solid waste from West Jerusalem being dumped at Abu Dis,  once set up by Israel as the Palestinian ‘capital’ of East Jerusalem even though it was not even inside the municipality until Israel put it there. The settlers do the same, dumping their rubbish and household waste water on Palestinian land in the valleys below their settlements on the hilltops.

In a statement handed to the UN Human Rights Council fact-finding mission to Palestine in February this year, Al Haq (Law in the Service of Man) presented some statistics. In 2012, 202 ‘incidents’ of settler violence along with dispossession, home demolitions, forcible evictions and intimidation; more than 200 settlements established since 1967, including 14 in East Jerusalem, and more than 500,000 settlers now living in them; and more than 42 per cent of the land of the West Bank as well as most of its resources allocated to Jewish settlements. Al Haq notes that the Israeli High Court ‘has rendered the question of the settlements non-justiciable’.

The Council for European Palestinian Relations estimates that the population in the West Bank settlements is growing at an average of five per cent a year compared to 1.8 per cent for the rest of occupied Palestine. It puts the total number of settlers at 467,000, of which number 385,000 are living in between the Separation Wall and the 1967 ‘green line.’

Every brick laid by Israel on the West Bank, every liter of water pumped out for settlements swimming pools and lawns and the presence of every settler represents a violation of international law. Yet, says Naftali Bennett, the Religious Services Minister and leader of the Jewish Home Party: ‘We will continue building and you will see this soon.’ He was speaking before the August announcement that more housing ‘units’ would be added to Jewish colonies in East Jerusalem. ‘I am sending the message from here to all the parties in the negotiations: the land of Israel belongs to the nation of Israel’. He has pledged to do ‘everything in my power to make sure they never get a state.’

In a leaked exchange with another cabinet minister Bennett said that ‘I’ve killed many Arabs in my life and there’s no problem with that.’ He complained that the conversation had been taken out of context, because what he meant was that he had ‘only’ killed them in the context of operations. There was one such ‘operation’ on the West Bank last week. Heavily armed soldiers stormed into the Jenin refugee camp, broke into the house of the Tubaisi family, shot Islam al Tubaisi, 19, in the leg, dragged him downstairs, his head banging on every step and  shot him dead before an ambulance took him to hospital. Perhaps in time the members of this unit will be bragging in time about how they also have killed many ‘Arabs’.

Dig deep enough into the crises in Iraq, Syria and Lebanon and the confrontation with Iran and eventually you will find Palestine. It remains the central issue, the pivot on which US policies, dominated  by Israeli interests and demands,  has turned  for more than six decades, yet for the takfiris affiliated with Al Qaida,  killing other Muslims (and Christians) in a variety of countries  takes precedence. It is striking that the same heads of government inveighing against terrorism and expressing their outrage at the slaughter of innocents in Nairobi have not once expressed outrage at the slaughter of innocents in Syria unless they thought they could blame the Syrian government.

The call of unity sounds through modern Arab history like the cry of a lost bird.  United the Arabs will stand and divided they will continue to fall. As long as they are not able to put common interests first they are going to be ripe for the plucking. What is at stake in Syria is not the political system but Syria itself and for the past three years it has been systematically and deliberately destroyed by an unholy coalition of  outside governments and the gangs of armed men doing their dirty work in the name of Islam.

The dominant Arab actors in this deliberately induced catastrophe are the regimes in Riyadh and Doha. They engage with Israel behind the scenes even as it colonizes Palestinian land and sends uniformed gangsters into the Haram al Sharif to beat Muslim worshipers trying to protect one of the holiest sites in Islam. While consorting with the enemy and abandoning the Palestinians these two regimes – infinitely less representative of the will of the people than the government in Damascus – take the lead in the destruction of an Arab state. The greatest beneficiary of their actions on one hand and their inaction and neglect on the other is Israel.  This is surely as great a disgrace as any in Arab and Islamic history.

– Jeremy Salt is an associate professor of Middle Eastern history and politics at Bilkent University in Ankara, Turkey. He contributed this article to PalestineChronicle.com