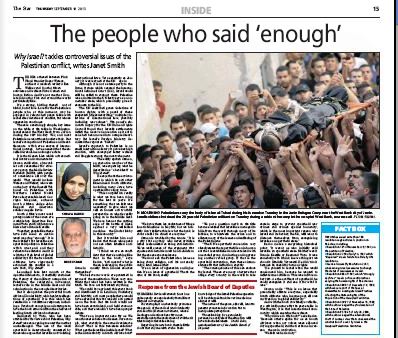 There’s a thread between Pink Floyd founder Roger Waters, eminent American writer Alice Walker and South African activists and writers Firoz Osman and Suraya Dadoo. And it’s not one that Zionists in South Africa and around the world particularly like.

It’s a strong, binding thread – not of blood, but of love. Love for the Palestinian people who, at this moment, may be engaged in relaunched peace talks with Israel after decades of conflict, but whose oppression continues.

There is a seemingly simple, key issue on the table at the talks in Washington. Israel seized the West Bank from Jordan during the 1967 Six-Day War, and most Palestinians want those borders back. But Israel’s occupation of Palestine and its settlements – which are a source of international outrage – have ensured that the so-called Green Line no longer exists.

It is that Green Line which unites medical doctor and commentator Osman and Dadoo, a journalist and researcher for advocacy group the Media Review Network (MRN), with people of conscience all over the world. That would include Waters and Walker, who were on the jury of the Russell Tribunal on Palestine with Northern Ireland Nobel Peace laureate Mairead Corrigan Maguire, eminent South African Judge John Dugard and American scholar Angela Davis.

South Africa’s most vocal protagonists of the cause are Archbishop Emeritus Desmond Tutu and Umkhonto we Sizwe hero Ronnie Kasrils.

Together, people like these have said halas: an Arabic word meaning “enough”. It is their belief that Israel has an apartheid policy on Palestine which must end, and they refuse to be silenced. And it is with that high level of global solidarity that the two South Africans have rigorously examined the conflict in a new book, Why Israel?.

Launched late last month at the ApartheidMuseum, it carefully examines the history of the military occupation of Palestine, the resistance movement, Israel’s role in the Middle East and discrimination in the occupied territories.

But it also probes the powerful South African Zionist lobby, which rejects allegations of apartheid. It is this which has resulted in a vociferous response, including a Facebook campaign and attempts to have the book removed from the shelves of leading South African bookstores.

Endorsed by Tutu, who has been attacked for his views about Palestine, Why Israel? was never going to enter the market unchallenged. The use of the word apartheid is determinedly contested by those who argue that Israel is not violating international laws. Yet as recently as January, it was warned at the UN – again.

Although it is not a states party to the Rome Statute which created the International Criminal Court (ICC), Israel could still be called to account there. Palestine was admitted to the UN last year as a non-member state, which potentially gives it recourse to the ICC.

The UN described gross violations of human rights, with a panel of three respected judges describing “multiple violations of international law, possibly including war crimes”. The panel’s six-month inquiry for the UN Human Rights Council found that Israel’s settlements defied the Geneva Convention as its citizens had been moved into occupied territory. But Israel’s Foreign Ministry dismissed the report as “biased”.

Israel’s approach to Palestine is no small international story. It provokes high emotion, with newspaper letter writers and bloggists among the most vehement.

The softly spoken Osman, an executive member of the MRN, was expecting what he described as “a backlash” to Why Israel?.

He says that’s the environment in which he and other like-minded South Africans, including many Jews, have operated for a long time.

“This compilation really is what we have been doing for the last 18 years. It’s something that we felt was necessary to give what we call an honest and truthful perspective on what is really going on in the Middle East. We have been at the cutting edge of the battle of ideas against a very well-oiled machine – the Zionist lobby in this country.”

But it troubles him and Dadoo that those who speak out are often labeled anti-Semitic.

“I think we are so confident that there’s nothing like that in the book,” says Dadoo, “and most of what is there, is already in the public domain – mostly from Zionist sources themselves”.

“We believe our words are protected in terms of the constitution. We’re very confident that what has been written is the truth. We have not fabricated anything.

“We could have printed this exact book and distributed it in Laudium, Fordsburg and Mayfair, and most people there would have agreed with what we said and patted us on the back. But the book would not have been scrutinised, and held accountable, and there wouldn’t have been proper debate.

“That’s an important area for us. We want honest debate about issues. For example, what exactly is the armed resistance about? What is this two-state solution? What are the laws like inside Israel? What is the Zionist lobby in South Africa about?

“We know there is a caricature of fringe lunatic Muslims in Mayfair, but we honestly don’t believe this is what the book is about at all. It is aimed at everyone.”

Osman is troubled by the taunts: “It is a pity that anybody who dares criticise Israel is slandered as being anti-Semitic. We’re well aware of the argument that equates anti-Semitism with anti-Judaism. But these are separate issues.

“We don’t see the Palestinian issue as being about religion, and it’s not really only a land issue either.

“We put a question mark on the title because we feel that Israel has managed to hide from the world through many of its lobbies, to whitewash the crime and to silence many of the issues and suffering of the Palestinians.

“The consequences of this are serious for Israel. There are many charters that oblige every country in the world to take certain steps to prevent apartheid war crimes and crimes against humanity, which is the most important reason why Israel and its backer, the US, will want to distance themselves from recognizing Israel as an apartheid state.”

Dadoo makes a surprising historical point: “It wasn’t us who initially said Israel is an apartheid state. Neither was it Ronnie Kasrils or Desmond Tutu. It was somebody who I think knew a thing or two about it: Hendrik Verwoerd. He didn’t do it because he cared for human rights.

“He pointed to Israel when the world condemned him, because he wanted to deflect some criticism. This was in November 1961. As the architect of apartheid, he could recognise it and see it for what it was.”

Osman nods. “This is an issue that potentially affects everyone, especially South Africans who, in some part, all owe our freedom to global solidarity.”

And with the book now freely available, at a critical juncture for the peace talks in Washington, it is that international community which sustains the writers.

“Why did we do this book?” asks Dadoo. “Because others spoke for us as South Africans when our voices were silenced during apartheid, and that is the main reason – the main motivation.

The following piece appeared in South African newspaper The Star. According to the conditions of the newspaper, this piece may not be amended and all credit must be given to The Star newspaper and Sekunjalo Independent (The Star’s parent company)