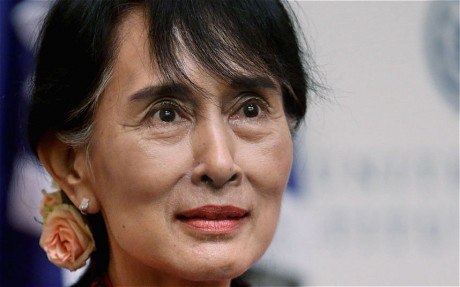 I never thought I would write this, but Aung San Suu Kyi sent a shiver down my spine when she appeared on the Today programme this morning. Her equivocal attitude towards the violence suffered by Burma’s Muslim minority was deeply disturbing.

I’m sorry to say that she employed the standard devices used by people who want to play down – and avoid condemning – something utterly reprehensible.

She went on: “Yes, Muslims have been targeted, but also Buddhists have been subjected to violence. But there’s fear on both sides and this is what is leading to all these troubles and we would like the world to understand: that the reaction of the Buddhists is also based on fear.”

Hang on a moment. Muslims are only 4 per cent of Burma’s population. The Rohingya Muslims, who have borne the brunt of the violence, are a smaller minority still. The idea that we should place the fears of the 90 per cent Buddhist majority alongside those of a small and vulnerable minority – and one that has been “targeted” for violence – is pretty extraordinary.

Suu Kyi then goes further by saying: “You, I think, will accept that there’s a perception that Muslim power, global Muslim power, is very great and certainly that is the perception in many parts of the world and in our country too.”

Global Muslim power? How powerful can a 4 per cent minority be, particularly when the Rohingya are explicitly forbidden from becoming citizens of Burma and therefore have no political weight whatever? What is Suu Kyi trying to say? That Buddhists in Burma are so terrified by “global Muslim power” that we shouldn’t be surprised when they turn on Muslims at home?

Suu Kyi also employs the second common device, namely to change the subject to something irrelevant. When Mishal Husain asked her to accept that 140,000 Muslims have been displaced by violence, Suu Kyi replied: “I think there are many, many Buddhists who have also left the country for various reasons. This is a result of our sufferings under a dictatorial regime.”

This is also completely irrelevant. If many Buddhist Burmese fled during the era of military dictatorship, this has no bearing whatever on the plight of the 140,000 Muslims who live in refugee camps today.

Suu Kyi then used the third standard tactic: uttering words of condemnation so general as to be meaningless. Asked to condemn a notorious Buddhist hate-preacher who compares Muslims to “dogs”, she said only: “I condemn hate of any kind.”

And then Mishal Husain asked her bluntly: “Do you condemn the anti-Muslim violence?” Suu Kyi replied: “I condemn any movement that is based on hatred and extremism.”