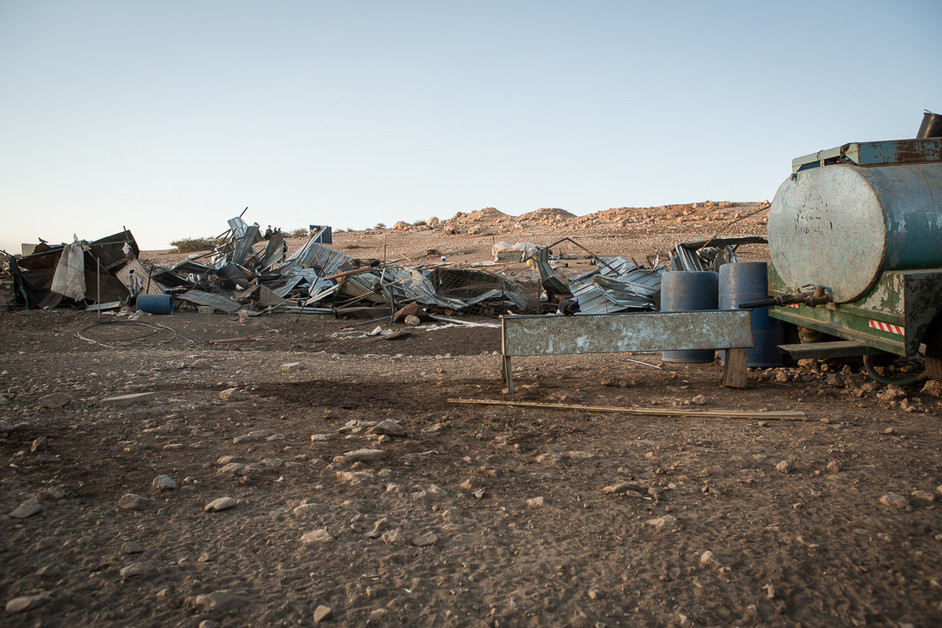 Once home to 12 families, 16 children and a total of 58 structures, the village of Khirbet al-Makhul now lies in ruins.

On 16 September an assortment of Israeli soldiers, border police and civil administration personnel oversaw the bulldozing of the Bedouin community of Khirbet al-Makhul in the north of the occupied West Bank’s Jordan Valley. The structures were razed, with Israeli high court approval, on the grounds that they were built without the required construction permits — permits that are nearly impossible to obtain.

Surrounded by an Israeli military base, a Jewish-only Israeli settlement and a live-fire Israeli military training area, the twelve families (approximately 120 persons) of Khirbet al-Makhul are being squeezed out. The community lies within Area C, the 60 percent of the West Bank under full Israeli civil and military control. The majority of the rural Palestinian villages in Area C, many of which are Bedouin communities, are similarly surrounded by Israeli installations and face a fate similar to that of Khirbet al-Makhul.

On 20 September, a group of European diplomats attempted to deliver tents and portable shelters to the families still living in Khirbet al-Makhul. Upon their arrival, the diplomats and aid workers were met with violence by the Israeli army; their aid was confiscated and they were quickly turned away. The site has since been declared a closed military zone.

Ashraf Bisharat and Tahseen Bin-Oudeh are two of the approximately twenty villagers who have chosen to remain despite the Israeli orders. The rest of the residents have relocated to the nearby village of Tannoun, despite having allegedly lived on the site for approximately 25 years.

Palestinians in Area C live in constant fear of eviction due to Israel’s continuous expansion of “state lands,” settlements, live-fire military training zones and the state’s control of the water resources in the area. All signs point towards a policy that designates Area C for Israeli use, and Israeli use only. In fact, Israeli Minister of Industry, Trade and Labor Naftali Bennett has long called for the unilateral annexation of the entire area.

Dylan Collins is a freelance photojournalist and writer based in the West Bank. His work has published by Al Jazeera English, Al-Akhbar English, Mondoweiss and elsewhere. Follow him on Twitter @CollinsDyl.

Area C is home to approximately 180,000 Palestinians; however, Israeli authorities prohibit construction and development on 70 percent of the land, disregarding the basic needs of the local communities.

Of the original twelve families, only twenty residents remain full time, watching over the 200 or so head of sheep — the livelihood of the village.

Remains of what used to be the center of life for twelve families now lay scattered across the arid terrain. Residents are wary of rebuilding for fear that Israel may annex the area entirely.

Ashraf Bisharat, a 32-year-old farmer expecting his first child, feels attached to the land. “I don’t want to be anywhere else. This is where I belong,” he says.

Ashraf and fellow shepherd Tahseen Bin-Oudeh take turns watching over the sheep day and night. They are resolved to continue tending their flocks on their village’s land despite the Israeli military’s refusal to allow them to rebuild any of the destroyed structures.

The two shepherds sleep on rusty iron beds underneath the stars each night.

As the sun finally begins to set, Ashraf and Tahseen build a fire and prepare tea.

“What else can we do?” asks Ashraf. “This is my home. This is my land. These sheep are how I provide for my family. I’m not going anywhere.”

Israeli soldiers run back and forth along the road in the background, between the live-fire training area at the left and their military base on the right. As soon as the sun goes down, the stillness of the evening is disrupted by the continuous sounds of gunfire echoing throughout the surrounding hills. “It’s like this every night,” says Tahseen.