Washington’s puppet regime in Libya teeters on the brink 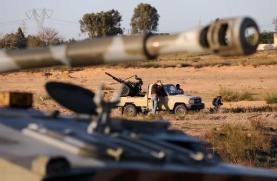 Libya’s capital city Tripoli was at a virtual standstill yesterday. Most of Tripoli’s businesses, schools and public sector workers went out on strike, demanding that militias leave the city.

A 48-hour state of emergency was declared Saturday. Tripoli saw some of the bloodiest fighting since the overthrow of Colonel Muammar Gaddafi in 2011, with at least 45 people killed in demonstrations on Friday and Saturday. Residents set up checkpoints and barricades of metal, wood and tires to protect their neighbourhoods.

There is growing anger towards both the Islamist proxies the United States used topple the Gaddafi regime—which have used extortion, assassination, kidnappings, imprisonment and torture to enrich themselves—and the neo-colonial government of Prime Minister Ali Zeidan.

On Friday, the Misrata militia fired on thousands of demonstrators, including women and children, killing 43 and wounding over 500. The demonstrators were calling for the government to rein in the militias as they marched to the Misrata brigades’ headquarters at Ghargour. The central government’s weak forces only arrived long after the violence erupted.

Witnesses said anti-aircraft weapons were fired at peaceful demonstrators carrying white flags and placards. Sadat al-Badri—the president of Tripoli’s city council, which called the protest—said the demonstrators were unarmed and had been shot at from inside the militia headquarters.

Taher Basha Agha, the Misrata militia’s chief at Ghargour, replied that the protesters were armed and that snipers on rooftops fired first, suggesting action by agent provocateurs. He rejected calls to leave the capital before the General National Council (GNC) had agreed a new constitution and a new state had been established.

At first Zeidan said that armed demonstrators were involved in the clashes and that security forces had not intervened “so as not to complicate the situation,” causing enormous anger. He later retracted this, stating that the protest march was “peaceful.”

Subsequently, armed men, including a militia called the Shield of Libya, arrived, set fire to the Misrata brigade’s headquarters and premises, and evicted them.

On Saturday, clashes broke out between local militias and the Misrata brigades in Tajoura, a Tripoli suburb, when armed reinforcements from Misrata attempted to enter the city from the east. Misrata fighters attacked an army barracks, setting off clashes in which one person was killed and eight wounded.

The events highlight the Washington-installed government’s political isolation, its inability to control the hundreds of armed militias, and mounting political and economic problems on all fronts.

The lavish funding of Islamists by Saudi Arabia, the Gulf States, and NATO to overthrow the Gaddafi regime has left Libya awash with weapons and heavily armed militias, turning the country into a base of regional terrorist groups and an exporter of arms and “Jihadists” to Syria.

It has led to constant clashes between rival ethnic and tribal based militias as they fight over land and resources. With some members of the tribes living across the southern border in Niger and Chad, the violence has spread to Libya’s neighbours.

Oil production has plummeted from 1.6 million bpd to 150,000 bpd, and exports to just 80,000 bpd. More than $6.43 billion in revenues have been lost due to violence, strikes demanding jobs and higher wages, and the blockading of the oil ports by militias. This threatens Europe’s oil security, as Libya is Europe’s largest single oil supplier.

The eastern city of Benghazi, centre of the oil industry, is a no-go area for Americans, British and French following the assassination of US Ambassador Chris Stevens in September 2012. Libya’s military prosecutor, Colonel Yussef Ali al-Asseifar, was blown up by a car bomb last August. Benghazi has now set up an autonomous regional government and announced the establishment of their own petroleum marketing and sales company, Libya Oil and Gas Corp, bypassing Tripoli.

Protesters shut Libya’s gas export pipeline for two weeks to Italy, its only customer, in the Mellitah complex 100 kilometres west of Tripoli, blocking oil exports from there as well. They cut gas supplies, hitting the electricity network.

The government is charged with drafting a new constitution before the end of its term on February 7 and faces a hostile General National Council. The Muslim Brotherhood dominated opposition has boycotted the GNC, as have a number of the legislators from the minority tribes such as the Berbers, Toureg and Tubu, over disagreements over the constitution, in order to bring down the government.

This has made it impossible for the government to agree a budget. With a quarter of a million fighters from hundreds of uncontrollable militias on its payroll, the government will run out of money to pay wages and salaries by the end of the year.

The government is unable to provide the most basic services. At least one third of the workforce is unemployed. One million Gaddafi supporters are internally displaced, while hundreds of thousands have sought refuge overseas.

Under the banner of the November 9 movement, hundreds of people protested last week in Tripoli and a number of other cities—demanding that the General National Council’s mandate not be extended beyond February 7, as Zeidan has indicated, and calling for early elections.

This has prompted Zeidan to warn of a possible “intervention of foreign occupation forces” to protect civilians under the UN Charter’s Chapter VII, because “the international community cannot tolerate a state in the middle of the Mediterranean that is a source of violence, terrorism and murder.” This was the same pretext for the NATO intervention that has caused the crisis in the first place.

Zeidan’s warning presages a possible return of NATO forces to Libya. The accelerating collapse of Zeidan’s puppet regime refutes any attempt by the Obama administration to depict the 2011 war for regime change in Libya as progressive. The war was neither a revolution, nor a struggle for democracy, but a bloody imperialist adventure in which the US, Britain, and France allied with right-wing tribal leaders, criminals, and Islamist thugs in order to topple the Gaddafi regime.

While these forces were hailed as “revolutionaries” by fake-left outfits such as the International Socialist Organisation, Britain’s Socialist Workers Party and France’s New Anti-Capitalist Party, they were running a campaign to loot Libya and divide up its resources with US and European imperialism. A revolution in Libya and the region can develop only from a united struggle of the working class and oppressed masses of North Africa against the imperialist intervention and its pseudo-left defenders.

Germany alone has spent €25 million ($34 million) in Libya since the autumn of 2011. Most of this was devoted to the destruction of weapons and mines, with €3.2 million going to NGOs to “boost democracy and civil society.”

France is most likely to intervene. Last week, Foreign Minister Laurent Fabius said on the sidelines of a regional border security conference in the Moroccan capital, Rabat, that France was considering giving Libya more aid to fight terrorism, including training more police. France has already agreed to train 1,000 Libyan police in counter-terrorism and plans to train another 1,500.

Fabius said, “Our action in Mali was so spectacular, but we need to continue to be there for the Malians, the Libyans and the whole region.”