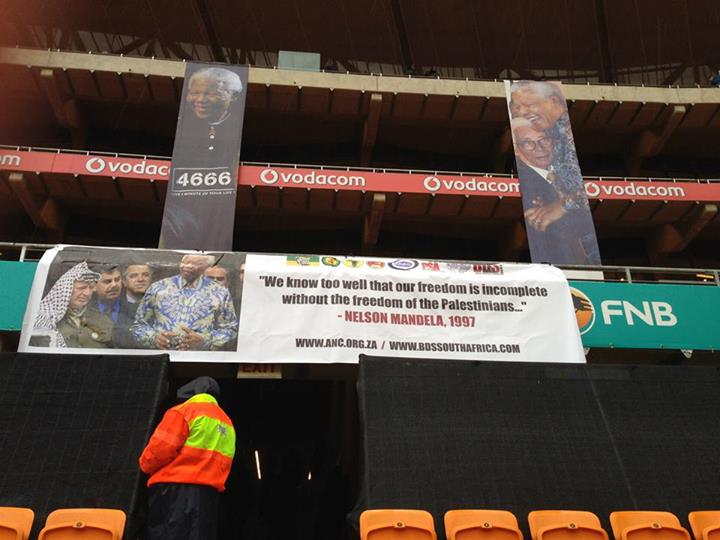 A large number of members belonging to the South African Palestine solidarity organization, BDS South Africa, attended today’s memorial in Soweto for the late South African President and anti-apartheid icon, Nelson Mandela. Mandela was one of the staunchest supporters of the Palestinian cause.

At the memorial there were several Palestine banners that were put up and around the stadium bearing a archival photo of Nelson Mandela with fellow Palestinian leader, Yasser Arafat, and the famous 1997 Madiba quote: “We know too well that our freedom is incomplete without the freedom of the Palestinians”. Photos of the banners can be found here: http://tinyurl.com/pxgroox

Upon meeting with Palestine’s Yasser Arafat in 1990, Nelson Mandela said: “I sincerely believe that there are many similarities between our struggle and that of the Palestine Liberation Organization (PLO). We [South Africans and Palestinians respectively] live under a unique form of colonialism in South Africa, as well as in Israel, and a lot flows from that” (click here for statement). Mandela later followed up that statement with a full length speech delivered in solidarity with the Palestinian people (find the full length speech here on the African National Congress (ANC) website: http://anc.org.za/show.php?id=3384)

BDS South Africa condemns the hateful messages being made against Nelson Mandela, by some pro-Israeli organizations, such as the Jewish Defence League (JDL). According to Wikipedia, the JDL is a “Jewish religious-political and militant organization” (see: http://en.wikipedia.org/wiki/Jewish_Defense_League)

A branch of the JDL in Canada sent out a twitter message last night on the eve of the Mandela Memorial event saying: “All the others attending [Mandela’s funeral] will confirm the bastard is dead and buried”. (Find here: http://tinyurl.com/o2859lf)

This was followed by another hateful message against our beloved Madiba by the JDL, the second tweet read: “Good riddance to the piece of garbage terrorist [Nelson Mandela] …”. (Find here: http://tinyurl.com/o2859lf)

And a third tweet was sent out by the JDL earlier this morning saying: “Hope the kaffir [Mandela] goes to hell.”(Find here: http://tinyurl.com/opkntz9

Nelson Mandela was always an ardent critic of the Israeli regime, for example, in September 2002, President Nelson Mandela said of Israel: “What we know is that Israel has weapons of mass destruction. Nobody talks about that. Why should there be one standard for one country, especially because it is black, and another one for another country, Israel, that is white.” (click here: http://tinyurl.com/ohjmobv)

However, Mandela’s criticism of Israel is no excuse for the completely unacceptable hate and racism being directed at our beloved Nelson Mandela and at such a sensitive time. Israeli supporters should be ashamed for their racist comments and attacks on such a moral giant as Nelson Mandela.
ISSUED BY MUHAMMED DESAI ON BEHALF OF BDS SOUTH AFRICA