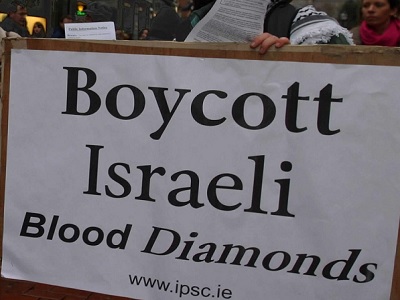 In November, members of the Kimberley Process (KP), meeting in plenary in South Africa, squandered what was probably their last good opportunity to ban the sale of all blood diamonds, including cut and polished blood diamonds which are an important source of funding for the nuclear armed regime in Israel which stands accused of the crime of apartheid, war crimes and crimes against humanity.

The governments with a vested interest in the diamond industry, that set up and control the KP, failed to amend the definition of a “conflict diamond” which is restricted to “rough diamonds used by rebel movements or their allies to finance conflict aimed at undermining legitimate governments”. All other diamonds associated with human rights violations evade the KP regulations.

The failure was well flagged in advance as key stakeholders, including South Africa which chaired the KP in 2013, had voiced opposition to reforms that would broaden the remit of the KP to embargo diamonds associated with human rights violations by government forces.

Some jewelers refuse to sell diamonds sourced in the Marange area of Zimbabwe where government forces are reported to have killed 200 miners. However, most if not all, of the worlds leading jewelers sell diamonds processed in Israel where the industry generates about $1 billion annually for the Israeli military which is guilty of grievous human rights violations in Palestine .

With the KP chair passed to China for 2014, and Angola in line for 2015, no one believes they will implement the changes necessary to ban the trade in all blood diamonds.

Corporate social responsibility statements – the moral beacons of wannabe ethically progressive companies – amount to little more than window-dressing unless they are supported by rigorous enforcement. No amount of charitable support for a company’s favorite worthy causes can mitigate, directly or indirectly, providing a revenue stream for rogue regimes guilty of gross human rights violations.

Anglo American plc owns 85% of De Beers making it one of the worlds leading diamond companies with interests at all stages of the supply pipe from mining to retail. De Beers promote their own “Forevermark” diamonds many of which are crafted in Israel .  Their promotional literature claims “Forevermark is committed to upholding the highest business, social and environmental standards and practices across its and its partners businesses”.

Anglo American’s Sustainable Development Policy  stipulates that suppliers are expected to uphold “fundamental human rights and fair labour practices, in line with internationally recognized standards”. Suppliers must also “oppose corruption, bribery, fraud…. and must not tolerate any form of money laundering or participate in other illegal incentives in business”.

Despite this, De Beers continues to sell diamonds crafted in Israel even though the Israeli diamond industry is notorious for discrimination in the workplace against non-Jews – a fact confirmed by data from the Israeli Bureau of Statistics and a recent government-funded initiative to encourage ultra-Orthodox Jews to take up employment in the diamond industry without a similar initiative for non-Jews.  Furthermore, although authorities uncovered the “world’s largest illegal bank”, involving fraudulent trading worth billions of shekels, in the Israeli Diamond Exchange in 2012, Anglo American continues trading with Israeli diamond companies.

Anglo American’s failure to abide by their own standards exposes their hypocrisy – a double-standard that permeates the jewellery industry when it comes to blood diamonds from Israel .

The Steinmetz Diamond Group, one of Tiffany’s biggest suppliers and a “unique partner” of Sotheby’s Diamonds, through the Steinmetz Foundation, funds and supports a Unit of the Givati Brigade of the Israeli military. The Givati Brigade is guilty of the massacre of at least 21 members of the Samouni family in Gaza – a war crime documented by the UNHRC and other human rights organizations.

Other world-leading jewelers including Harry Winston, Cartier, Ritani, Blue Nile, Zales, Brilliant Earth, Graff Diamonds, Chow Tai Fook, Chopard and many more, sell diamonds from Israel which are tarnished with Palestinian blood – one of the most recent victim being a 15 year old child, Wajih Wajdi al-Ramahi, shot in the back and killed by the Givati Brigade on 7th December.  He was the 26th Palestinian to be killed by the Israeli military this year.

The imperative for all businesses to respect human rights and ensure their business relationships are not contributing to adverse human rights impacts is a well established tenet affirmed in the UN Guiding Principles on Business and Human Rights, the UN Global Compact, and the OECD Guidelines for Multinational Enterprises.  The fact that the diamond industry, which accounted for 31.2% of Israel ’s manufacturing exports in 2011, is a very significant source of revenue for the regime in Israel means jewelers that sell diamonds processed in Israel help fund the commission of war crimes and suspected crimes against humanity.

Shareholders of companies that sell diamonds linked to atrocities and bloodshed are exposed to financial and legal hazard.  The fraudulent misrepresentation of such diamonds as conflict-free leaves jewelers open to challenge by patrons angered by the fact that diamonds they purchased in good faith are de-facto blood diamonds. Companies complicit in human rights violations may be liable for reparations, which, in the case of victims of Israeli violence in Palestine , could amount to billions of dollars.

Despite Israel ’s record as a serial human rights offender and it’s nuclear weapons stockpile which it refuses to submit to international regulation, the leaders of the global diamond industry continue to give Israel refuge in the KP tent.

If consumers are to have confidence in the ethical credentials of diamonds civil society needs to regain the initiative. This can be done by putting the jewellery industry under the spotlight and demanding that jewelers guarantee the diamonds they sell are not a source of funding for, or in any way associated with, serious human rights violations – i.e. they are not blood diamonds.

Diamond buyers should not allow jewelers to fob them off with assurances about “conflict diamonds” – the sacrificial offering which only encompasses rough diamonds that fund rebel violence against legitimate governments. This distracts from, and blinds consumers to, the extensive trade in cut and polished blood diamonds which continues unchecked and largely unreported by media.

Another example of the duplicity of the jewellery industry is the widespread abuse of the term conflict-free. This is part of a bogus System of Warranties introduced by the World Diamond Council which allows sellers to self-certify diamonds as conflict-free based on the fact that they are in compliance with the discredited Kimberley Process which gives legal cover to blood diamonds that fund government forces.
By Sean Clinton

– Sean Clinton is a human rights activists from Ireland with a particular interest in Israel/Palestine and the role diamonds play in funding the Zionist project in Palestine . He has authored several articles about the double-standard in the diamond industry which facilitates the trade in cut and polished blood diamonds. He contributed this article to PalestineChronicle.com.