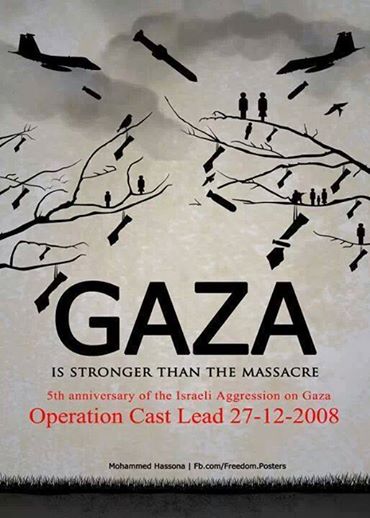 Many will spend the day recalling these moments in time five years ago that stunned the world. It is difficult to pinpoint exactly what sears these moments into the minds eye. Perhaps it was the corpses that pilled up on the streets of Gaza as the mortuaries overflowed. Perhaps it was the mountains of rubble left in the places that were once called ‘home’ by the people of Gaza. Perhaps it was the ferocity with which the might of the worlds most sophisticated armaments were brought to bear on the souls of a defenceless civilian population. What remains without question is that Gaza was never the same after Operation Cast Lead and neither would the lives of the 1.8 million people that were subjected to the bombardment.

The plight of the Gazan population has been a tragedy that marks the current generation as failures. As israel continues to occupy Gaza by controlling their airspace, the borders both directly and indirectly as well as their sea, the Gazan population remains malnourished and poverty stricken. The military despot Sisi much like his predecessor Mubarak has declared war on the Muslim Brotherhood, the mother organisation of Hamas. It therefore stands to reason that the Egyptian junta would once again support israel’s policy of the crippling siege on the Gaza strip.  Gaza has no electricity thanks to israel’s precision bombing campaigns that destroyed the only power plant in the coastal sliver. As a result of the lack of fuel to run generators and the lack of parts to repair the only power plant, raw sewerage has flooded the streets. Inevitably disease will begin to spread rapidly in one of the most densely populated areas on the planet. As mothers and fathers rush their little ones to the handful of hospitals, they will be greeted with news that not much can be done as the Helium gas for the MRI scanner has run out or the drug required to save their child’s life is part of the 40% of essential drugs that have run out and not been resupplied due to the blockade.

As the conditions worsen in Gaza, the World should bow its head in shame as we witness Article 25 of the Universal Declaration of Human Right being torn to shreds by the lonesome bastion of ‘Democracy’ i.e. israel. Article 25 reads:

(1) Everyone has the right to a standard of living adequate for the health and well-being of himself and of his family, including food, clothing, housing and medical care and necessary social services, and the right to security in the event of unemployment, sickness, disability, widowhood, old age or other lack of livelihood in circumstances beyond his control.

As the appeals from Oxfam and Amnesty International to end the brutalisation of a population, 43.5% of which are under the age of 15, fall upon deaf ears; it would seem that the only hope resides in the global populations and not our leaders.  If we fail to act, it would be a sad day indeed when as a global collective we sit in silence as health, warmth from the cold, and food are used as a weapon to besiege, torture and kill off a population.

It has been five years since 1500 Palestinian souls perished, 1872 children were injured and 600 more were permanently disabled at the hands of israel.  Yet the brutalisation by israel did not stop there. As 234000 people in Gaza suffer from extreme poverty resulting in 12 year old Mustafa al-Assar being forced to become a street vendor to help his family. Mustafa is only one soul languishing in Gaza, yet there are many children in Gaza carry the same fate.

Perhaps as the world pays tribute to our Nelson Rolihlahla Mandela, they will remember his speech from the dock during the 1964 Rivionia Trial. He said:

“Our fight is against real, and not imaginary, hardships or, to use the language of the State Prosecutor, `so-called hardships`. Basically, we fight against two features which are the hallmarks of African life in South Africa and which are entrenched by legislation which we seek to have repealed. These features are poverty and lack of human dignity”

As poverty and the lack of human dignity become the hallmarks of Gazan life, it is we the global collective that must protest this deplorable siege. As israel weaponises the rights to health, food and dignity to destroy the population of Gaza, it becomes unconscionable to remain silent. Indeed, we reflect on the painful memories and images of Operation Cast Lead and the mangled bodies of the children that israel spun as a military victory. However the words of Mahatma Gandhi  reminds us that the violence employed by israel on the civilian population of Gaza never stopped five years ago:

“Poverty is the worst form of violence”

Let not the legacy of our generation be that we remained muted as poverty and the lack of dignity defined the existence of a people. End the Siege.

Zaakir Ahmed Mayet has a passion for Middle Eastern politics and military sciences, he has provided analysis across numerous media, and has been published by various online and print publications including The Thinker Magazine, Palestine Chronicle, Eurasia Review, Press TV and the Middle East Monitor. He holds a Bachelor of Laws (LLB) degree from Wits University.