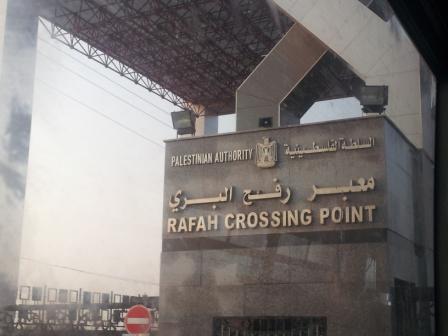 Travelling to Gaza this year with the South African delegation was reported as the most difficult trip made by the humanitarian group- the Gaza Rehabilitation Fund. This particular group had made 8 previous trips and in none of them had so many obstacles been encountered, both on entering and leaving Gaza. The reason for our countless stressors and problems was very simple- the Egyptian military who has taken over since the coup last year.

Crossing over at the Rafah border from the Egyptian to the Palestinian side was a mere 200 meters in distance, but the difference in attitude that we immediately felt defies description. Unbelievable warmth and hospitality welcomed us on the Gazan side of the border, a completely different feeling from what we had just left behind with the hostile and cold Egyptian military controlled areas in Rafah. The Egyptian military is just as guilty as the Israelis for the siege on the people of Gaza. Closing the border arbitrarily and sometimes, indefinitely, without any consideration of the strangulation of the 1, 8 million strong population trying to survive.

First, we had to find out that the border would be closed on the day we were initially planning on entering. Then, after making the 7 hour drive from Cairo to Al-Arish (which would have taken considerably quicker had it not been for the countless military checkpoints along the way) we were unequivocally refused entry at a military checkpoint  as the border was closed again. We had been told the day before that it would definitely be open. On our third attempt, we were rejected again at a military checkpoint, without any reason given. With our passports in hand and all our official documents in order it was becoming increasingly difficult to maintain our patience as army clad youth hardly out of high school ordered us around with stubborn and abominable attitudes.

However, this was a scene we were quickly becoming accustomed to seeing in Egypt. Everywhere around, from Giza to Cairo to Al-Arish, the heavy hand the military was playing in controlling the everyday lives of the Egyptian people was evident. And the citizens’ displeasure at such tyranny was signaled in the tense atmosphere we constantly experienced. The Western backed military coup which overthrew the first ever democratically elected leader of Egypt, Muhammed Morsi of the Muslim Brotherhood, hardly a quarter of the way through his term is in danger of throwing Egypt into a bloody civil war.

Over the past week there have been peaceful protests against the military coup across Egypt, with a violent and tyrannical response from the military. Brutal force against unarmed protestors has resulted in the death of 19 protestors a week earlier, with dozens more injured and hundreds jailed. An 83 year old woman, Zainub, was murdered in cold blood in an anti-coup march in Sidi Bishr, Alexandria after security forces opened fire with live ammunition at the crowds. We have seen the imprisonment of young girls under the age of 15 for exercising their democratic right to protest, the careless killing of university students and chaos reign all across the Egyptian country. And yet, throughout all of this oppressive behaviour by the military, which exceeds that even displayed by the dictator Mubarak, not a single word is spoken from the USA, the supposed greatest democracy in our world.

The effects of military rule do not only negatively affect the Egyptian citizens. The closure and restrictions placed on the Rafah border impacts the Gazan people every day. Fuel restrictions mean not only electricity usage is heavily limited to each household, but fuel for cars and basic actions the rest of the world take for granted is a real struggle in Gaza. Driving past petrol stations one would be able to see almost 50 car pile ups, as each car waited patiently for their 5 L of petrol. This was all each car was allowed due to the shortages in the besieged region and even at its exorbitant price people had to make do with what was available.

Medical supplies, building equipment, basic household items and any item one can think of has restricted access in Gaza. With the recent military coup and even tighter restrictions on border movement than before, the people of Gaza are really feeling the brunt of the authoritarian Egyptian military.

We can only hope that the people of Egypt remain strong and steadfast to bring down the military rule in their country. This is incumbent, not only to uphold the principles of democracy everywhere, but to ensure that the besieged population of Gaza does not wither away into oblivion as the world forgets their constant struggle against all odds. The indomitable spirit of both the people of Gaza and Egypt is a lesson against oppression and subjugation which will echo in the halls of history.