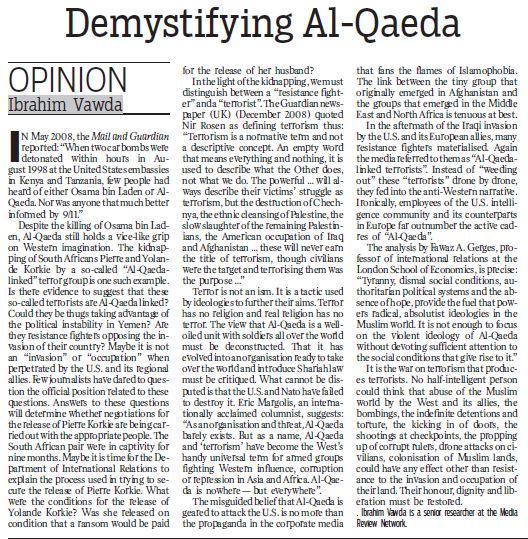 In May 2008, the Mail and Guardian reported and I quote: “When two car bombs were detonated within hours in August 1998 at the United States embassies in Kenya and Tanzania, few people had heard of either Osama bin Laden or Al Qaeeda. Nor was anyone that much better informed by 9/11”.

Despite the “killing” of Osama bin Laden, Al Qaeeda still holds a vice-like grip on the Western imagination. The kidnapping of South Africans Pierre and Yolande Korkie by a so-called “Al Qaeeda-linked” terror group is one such illustration.

Is there evidence to suggest that these so-called “terrorists” are Al Qaeeda linked?   Could they possibly be gangsters or bandits or thugs taking advantage of the political instability in Yemen?  Are they resistance fighters opposing the invasion of their country?  Maybe it is not an “invasion” or “occupation” when perpetrated by the US and her regional allies. Very few journalists have dared to question the official position related to these questions. Answers to these questions will determine whether negotiations for the release of the Korkie couple are being carried out with appropriate people.

In the light of the kidnapping it is imperative that we distinguish between a “resistance fighter” and a “terrorist”. The Guardian newspaper (UK) (December 2008) quoted Nir Rosen as defining terrorism thus: “Terrorism is a normative term and not a descriptive concept. An empty word that means everything and nothing, it is used to describe what the Other does, not what we do. The powerful – whether Israel, America, Russia or China – will always describe their victims’ struggle as terrorism, but the destruction of Chechnya, the ethnic cleansing of Palestine, the slow slaughter of the remaining Palestinians, the American occupation of Iraq and Afghanistan – with the tens of thousands of civilians it has killed … these will never earn the title of terrorism, though civilians were the target and terrorizing them was the purpose…………..”.

Terror is not an -ism. It is a tactic used by various ideologies to further their own ends. Terror has no religion and real religion has no terror.

The view that Al Qaeeda is a well-oiled unit with foot soldiers all over the world must be deconstructed.  That it has evolved into an organisation that is ready to take over the world and introduce Shariah Law must be critiqued. What cannot be disputed is that the US and NATO have failed to destroy it after spending trillions of dollars trying to do so.

Eric Margolis, an internationally acclaimed columnist suggests that   “As an organization and threat, al-Qaida barely exists. But as a name, al-Qaida and “terrorism” have become the west’s handy universal term for armed groups fighting western influence, corruption or repression in Asia and Africa. Al-Qaida is nowhere – but everywhere”.

The misguided belief that Al Qaeeda in Yemen, Pakistan, Iraq, Somalia, Indonesia are geared to attack the US is no more than the propaganda of journalists in the corporate media that fan the flames of Islamophobia. The link between the tiny group that originally emerged in Afghanistan and the groups that emerged in the Middle East and North Africa is very tenuous at best.

In the aftermath of the Iraqi invasion by the US and her European and regional allies, many resistance fighters materialized. Again the media referred to them as “Al Qaeeda-linked terrorists”.  Instead of “weeding out” these “terrorists” drone by drone, they fed into the anti-American and anti-Western narrative. Ironically, employees of the US intelligence community and their counterparts in Europe far outnumber the active cadres of “Al Qaeeda”.

The analysis by Fawaz A. Gerges, Professor of International Relations at the London School of Economics, is precise:  “Tyranny, dismal social conditions, authoritarian political systems, and the absence of hope provide the fuel that powers radical, absolutist ideologies in the Muslim world. It is not enough to focus on the violent ideology of Al-Qaeeda without devoting sufficient attention to the social conditions that give rise to it”.

Western powers must expedite their withdrawal from Muslim countries. Their occupation of these countries is a reminder of the colonial legacy of oppression, harassment and cruelty.

It is the war on terrorism that produces terrorists. No half-intelligent person could think that abuse of the Muslim world by the West and her allies, the bombings, the indefinite detentions and torture, the kicking in of doors, the shootings at checkpoints, the propping up of corrupt rulers, drone attacks on innocent civilians, colonization of Muslim lands, could have any effect other than resistance to the invasion and occupation of their land. Their honour, dignity and liberation must be restored.