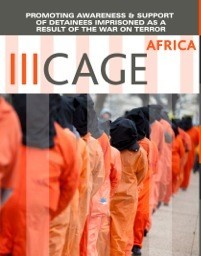 A UK-based human rights group that first uncovered the identities of detainees at Guantanamo Bay [1] will be launching its South Africa chapter at the end of this month.

CAGE, which was established ten years ago, began as a community website dedicated to publishing information about detainees held as part of the War on Terror. Today, it is a leading rights organisation in the UK, with survivors of the War on Terror and former Guantanamo Bay detainees among its ranks. With advocacy as its key objective, CAGE also has a strong media presence. [2]

The group has been at the forefront of uncovering some of the most disturbing aspects of the War on Terror. It uncovered the UK’s participation in rendition and torture for the first time In a report entitled Fabricating Terrorism [3], and also compiled the first comprehensive list of over 100 prisons used in the War on Terror since 2006 in another called Beyond the law. [4]

CAGE has uncovered many cases of abuse, arbitrary detention and complicity in torture on the African continent too. One of CAGE’s case individuals, Ali Adorus, a Briton arbitrarily detained and tortured in Ethiopia made the front-page of the British newspaper The Independent. [5] [6]

CAGE’s launch in South Africa comes at a time when African countries are becoming increasingly involved in the War on Terror through their participation in AFRICOM or by hosting “black sites”. Given the current international atmosphere of Islamophobia it is essential that a close watch is kept and reliable research done on recent moves by western countries to globalise anti-terror laws that are often at odds with human rights.

Amandla Thomas-Johnson, CAGE spokesman, said: ‘CAGE has been advocating for respect for the rule of law in the War on Terror for over a decade now.  We are pleased to be launching in a country famous for its rich heritage of struggle against injustice.’

The official CAGE Africa launch will be held at the Apartheid Museum in Johannesburg on the 29th of August 2014 at 18:30. The guest speaker will be UK-based journalist and CAGE patron Yvonne Ridley. Yvonne was captured by the Taliban in 2001. Since her release, she has become a leading activist for human rights. She has delivered lectures on issues pertaining to the war on terror, Iraq, Afghanistan, Palestine, amongst other human rights issues. She is a member of Stop the War Coalition and the Respect Party in the UK. She is also an author of two books, “In the Hands of the Taliban” and “Ticket to Paradise”. She is a patron of Cage and is also European President of the International Muslim Women’s Union and Vice President of the European Muslim League. CAGE would like to extend an open invitation to the public, human rights organisations, students and those in the legal field.

The official launch will be preceded by a Press Conference at 15:30 at the Truth Café, Apartheid Museum.