A time for personal growth and reflection 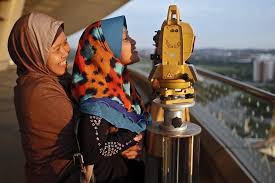 PICTURE: FAZRY ISMAIL / EPATHE SIGNS: A mother holds her daughter to look at a telescope to determine the sighting of the new moon to mark the start of the fasting month of Ramadaan in Putrajaya, outside Kuala Lumpur, Malaysia, on Tuesday.

But there’s another aspect to holy month of Ramadaan

RAMADAAN begins today. The month-long fast is an ideal opportunity for personal growth and collective reflection on the state of the Muslim world.

Two million Muslims in South Africa have joined 1.5 billion Muslims around the world and begun fasting during Ramadaan – the most sacred month of the Islamic calendar during which Muslims completely abstain from food, drink and marital relations from the break of dawn to sunset.

Fasting during Ramadaan (along with the declaration of faith, five daily prayers, charity and pilgrimage) is an essential part of Islam, and commemorates the first revelation of the Qur’an to Muhammad (Peace Be Upon Him). The act inspires discipline, self-restraint, thankfulness and generosity, while obeying God’s commandments.

An empty stomach is also one of humankind’s great levellers. For 30 days, an oil-rich emir will feel the same hunger as a struggling vendor on the streets of Bangladesh. Compelled to feel the hunger pangs experienced daily by a billion people around the world living below the poverty line, many Muslims also choose to pay their zakat, an obligatory annual tax to help the poor in their community.

Although the focus of Ramadaan is personal reflection and nearness to God, there is also an important socio-political dimension: reflecting on the condition of the ummah (the global Muslim community).

While Ramadaan is embodied by equality, discipline and self-restraint, these qualities are missing in leadership in the crisis-ridden Muslim world, where appetites for oppression are largely satisfied by American foreign policy objectives.

The Obama administration has chosen not to label the overthrow of Mohamed Mursi as a military coup in Egypt. In the face of violent repression – including the incarceration of South African citizen AbdusSalaam Bassiouni – the White House “punished” the military regime of Abdel Fattah al-Sisi by temporarily suspending military aid to Cairo, which it was required to do by law anyway. No threats of sanctions, no economic boycotts. Regular beheadings and lashings make Saudi Arabia as heinous as Islamic State, yet there has never been any serious American governmental outrage directed at Washington’s key political and energy ally in the Arab world. American strategic interests, which ultimately become the world’s strategic interests, take precedence over addressing injustice.

As Islamic State condemnation flows freely from the US administration and its closest allies, as well as non-governmental groups around the world, it is worth remembering that Islamic State is the same group that received arms and material support from America, and its allies Kuwait and Saudi Arabia, at the time of regime-change efforts in Libya, and later when the same process was attempted in Syria.

By American logic, then, helping Islamic fundamentalist groups is okay as long as they are opposing regimes that you don’t like.

The best jihad (struggle), according to the Prophet Muhammad (Peace Be Upon Him) is to speak a word of truth and justice to a tyrannical ruler.

Supporters of freedom – whether Muslim or non-Muslim – should not be afraid to name, shame and confront oppression wherever it is seen: from South Africa to Saudi Arabia; by so-called liberation movements like Islamic State; or being perpetrated under the guise of national security by the US or Israel.

As long as oppression remains a strategic necessity, the Muslim world will remain hungry for freedom.