The truth behind “fact-finding missions” to Israel 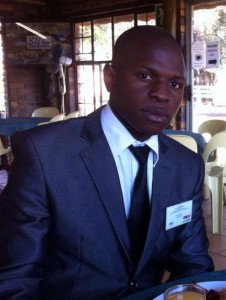 “I’ve only seen 60 percent of what I should have,” Klaas Mokgomole tells Suraya Dadoo

Between 4 and 11 July, fifteen young South Africans were taken on an all-expenses paid trip to Israel by the South African Israel Forum (SAIF). The group comprised of five students who were occupying executive positions on their university Student Representative Council (SRC), or leadership positions within the South African Student Congress (SASCO) and African National Congress Youth League (ANCYL) structures. The students say they accepted the invitation to Israel in their personal capacity. In addition, three former Wits University student leaders, Klaas Mokgomole, Justice Nkomo, and Norman Mashegoana were also part of the delegation. Mokgomole and Nkomo were part of a group of 11 students that disrupted a performance by German-based Israeli pianist, Yossi Reshef, in 2013.

The July trip was not the first “fact-finding mission” to Israel for local student leaders. In January this year, SAIF launched its Young Leaders Israel Tour, with a similar itinerary to the one followed in July. SRC executive members from the University of Cape Town, Johannesburg, Pretoria, Stellenbosch, Rhodes University and Wits, visited Israeli military bunkers, swam in the Dead Sea and were addressed by Ministry of Foreign Affairs officials. Justice Nkomo was also part of this tour.

While the January trip went largely unnoticed, the political blowback from July’s “fact-finding mission” was serious. A Haaretz article headlined “South African community in Ra’anana meets young ANC leaders” prompted an outcry from the African National Congress (ANC). Haaretz subsequently removed the ANC reference. Three members of SASCO have been suspended for going on the trip, and are currently facing an internal disciplinary process.

“We want to see for ourselves”

Most of the students have publicly stated that, as South Africans, they wanted to increase their knowledge about the Israeli-Palestinian conflict. So, when the offer of a free trip to Israel was offered, many jumped at the chance to “see for themselves”, as the organisers promised. What did they see? I decided to ask two of the most outspoken participants, Justice Nkomo and Klaas Mokgomole.

Nkomo, who now describes himself as a Zionist after going on two SAIF trips, initially agreed to a personal interview, but then refused to return numerous e-mails and phone calls to confirm a date and time. Klaas Mokgomole, however, discussed at length the content of the trip, and if it has enhanced his understanding of the various aspects of the Israeli-Palestinian conflict.

Mokgomole described how he heard from various Palestinian speakers about why Israel’s policies against the Palestinians could not be compared to Apartheid, and why Israel should not be isolated through Boycott, Divestment and Sanctions (BDS). I asked him if he heard from the other side: Israelis who argue that Israel is an Apartheid state and why it should be isolated. Mokgomole seemed surprised at the question. This small, but growing, movement within Israel was not even discussed. Mokgomole and the other students were not even made aware of the existence of the Boycott from Within group.

This omission, Mokgomole conceded, was like “coming to South Africa and meeting [Mangosuthu] Buthelezi and not Ronnie Kasrils or Joe Slovo. That is not the whole picture.”

The BDS Movement was a major issue for the students. In a scathing statement drafted while the group was still in Israel, Mokgomole and other students wrote that “there is no BDS structure in Palestine”.  Clearly, the group was never taken to meet any of the 170 Palestinian civil society organisations that came together a decade ago in Ramallah to form the BDS Movement. The BDS National Committee is based in Ramallah, and its Israeli co-founder, Omar Barghouti, lives in Tel Aviv.  Even though the students visited both cities, they did not meet members of the BDS Movement.

Despite his lack of interaction with any BDS members – Palestinian or Israeli – Mokgomole still wrote in the Sunday Tribune on 19 July: “during my interaction with the Palestinians, it was clear many of them had no idea what BDS was and were unaware of any projects it initiates in Palestine to benefit the people in these territories.”

This would have been an ideal opportunity for Mokgomole to ask BDS Movement the questions that had troubled him and others. Curiously, the organisers denied him this opportunity by not exposing him to the boycott movement that was founded by Palestinians, for Palestinians – and now supported by some Israelis.

The SAIF’s Dan Brotman, who accompanied the delegation to Israel, refused to comment, or answer any of the questions I sent him, about the itinerary and content of the tour.

While Mokgomole met with liberal Israelis who supported some type of state for the Palestinians, he confirmed they did not meet with a single representative of Israel’s right-wing government that opposes the formation of a Palestinian state. This was something that bothered him.  “We wanted to meet with government people and ask them why they are running the country like that. We wanted to speak to them directly. They are the ones with the real power.”

He brought this up with the organisers, arguing that a fact-finding mission should definitely have included meeting parliamentarians from the various Israeli political parties that control policy-making in the Knesset. (A fact-finding mission facilitated by Open Shuhada Street in October last year did meet representatives of the Knesset. Their report can be found here).

The trip has taught Klaas that most Israeli people want peace, but the government doesn’t.  If this is the case, then who are the people that put the most right-wing government in Israeli history in power, and did they meet them? Residents and extremist leaders of Israeli settlements in the occupied West Bank were a major factor in the outcome of the last election. Mokgomole said they did not meet a settler or visit an Israeli settlement (illegal under international law), and could not seek their views on the peace process.

The issue of settlements, however, did come up in group discussions. Mokgomole was concerned with the way that Palestinians are treated in the West Bank – particularly those that live next to settlements.

During a discussion Mokgomole asked: “So, why don’t you just get rid of the settlements?” His question was never answered.

The harsh everyday reality of the occupation in the West Bank was carefully shielded from students. They did not experience the process that Palestinians must endure daily to obtain a permit from the Israeli authorities to cross a checkpoint.

Students were shown Israel’s security barrier, and Klaas explained that that it was built to keep out suicide bombers. “Walls were a necessary evil. Israel was not alone in constructing such a barrier,” countered Mokgomole. True. Even the United States has built a barrier along its border with Mexico to keep out illegal immigrants. The difference, though, is that the American wall follows the border with Mexico, and does not snake deep into Mexican territory, stealing land. It was clear that the route of the security barrier was never examined or discussed.

Mokgomole was able to give me a detailed explanation of some of the religious beliefs underpinning Palestinian suicide bombings. Yet, the issue of increasing Jewish extremism and the use of Jewish religious texts to justify violence against Palestinians (like the burning of Ali Dawabsheh and his father) was never mentioned at all during discussions.

“I’ve only seen 60 percent of what I should have seen,” confesses Mokgomole at the end of our interview.

He wishes that they could have  gone to Gaza and heard from Hamas themselves. I share his sentiments. South Africans might be very surprised by what Hamas has to say. The organisers cited security concerns as one of the reasons why they could not enter the Gaza Strip. Strangely, the organisers also told the students that Hamas controlled the border – even though the Erez Crossing is controlled by Israeli security!

Ultimately, Mokgomole feels that the trip did not fully enhance his understanding of the conflict.

In 1989, a rising star of the Conservative Party’s Research Department, 23-year old David Cameron, accepted an all-expenses paid trip to Apartheid South Africa. The trip was organised and funded by Strategy Network International (SNI), created in 1985 specifically to lobby against the BDS Movement. When Cameron’s trip was revealed in a 2009 biography, his mortified office called it a “fact-finding mission” on which Cameron had met with black political leaders.

What Cameron really did was follow a strictly-controlled itinerary. The guided tour included a visit to a mine to illustrate South Africa’s entrepreneurial spirit, business development, and technological know-how. Next was a bit of tourist fun at the Sun City resort in the prosperous homeland of Bophutatswana, to show visitors that Apartheid was not really that bad. Black townships were strictly out of bounds as they were “too dangerous.”

Cameron would have heard from Isaac Mokeona speak. Mokeona was the founder of a conservative alliance of independent black churches in South Africa – and introduced as a man who represented the views of 4.5 million black South Africans. Mokeona lambasted the American and European anti-apartheid movement, arguing that isolation would only harm the black population. Cameron, and other participants left believing they had heard the voice of black South Africa. Organisers ensured that they never came into contact with representatives of the African National Congress (ANC) or any other mass democratic movement. Most visitors would return home singing the praises of South Africa, and could not see the need to impose a BDS campaign against Apartheid South Africa.

Like Mokgomole, most of the students went on the trip to “see for themselves”. The expansion of Jewish settlements onto Palestinian land, detention without trial, Palestinian Bantustans, and the dompas system are there to see – but  only if you are allowed to, as was the case with propaganda trips to South Africa.

Dan Brotman correctly predicted three years ago that some of the participants in SAIF trips will one day be captains of industry or sitting in higher office. Like David Cameron, they, too, will be embarrassed that they once had a role in marketing occupation, apartheid and colonialism.

Suraya Dadoo is a researcher for Media Review Network. She is also the co-author of Why Israel? The Anatomy of Zionist Apartheid: A South African Perspective (Porcupine Press, 2013).

This piece originally appeared on News24.com, and the original can be accessed here