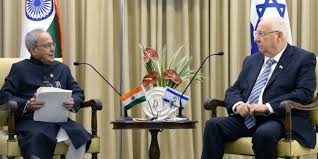 During Indian President Pranab Mukherjee’s recent visit to Israel, he departed from his prepared text at a ceremonial reception hosted by Israeli President Reuven Rivlin.

Much to the consternation of his hosts, Mukherjee denounced violence and said that India always advocated peaceful resolution of all disputes.

While this denunciation did not sit well with Israel, Mukherjee went on to seek an assessment from Israel of recent developments, which he said held direct implications for India.

This certainly struck a raw nerve. Israel was in no mood to provide any explanation for how they were dealing with the Palestinians, claims Sanjay Kapoor in his report published in The Star (December 15, 2015).

Titled “Mukherjee’s tightrope trip raises tension”, Kapoor’s assessment of the trip is that from the standpoint of outcomes, the visit fell way short of the mark.

“Neither did Mukherjee endear himself to the Israelis nor did it really clear the haze on when India’s itinerant Prime Minister, Narendra Modi, will be going to Tel Aviv”.

What was Israel’s expectations from the BJP-led Indian government?

According to Kapoor, it was that India would show greater support for Israel after the manner in which New Delhi abstained from a crucial UN Human Rights Council resolution that chose to demand an international inquiry against Tel Aviv’s violence in Gaza.

As traditional party to party allies, the BJP and Likud leaders had believed that Modi’s election to power will entrench their friendship. This may be so ata personal level, but as Mukherjee’s visit demonstrated, tensions between the countries remain.

For example, Mukherjee wanted to give computers and technical equipment to the Palestinian University, but was denied permission by the Netanyahu regime to do so. Apart from being humiliated, the Indian President was understandably angered.

This probably explains why during his stopover in the Occupied West Bank, Mukherjee quoted Mahatma Gandhi as saying:

Gandhi was opposed to Zionism and its plans to overrun Palestine. To quote him, as Mukherjee had done, sent a strong signal of New Delhi’s traditional support for Palestine.

As Kapoor confirms, The Times of Israel, lent context to Gandhi’s quote byreminding its readers that India’s leader in 1938 had criticised Zionism and its efforts to reduce the proud Arabs. Haaretz also headlined India’s unwavering commitment to the Palestinian cause as it sought closer ties with Israel.

Despite Netanyahu’s friend Modi occupying India’s highest seat of power, it seems pretty clear that New Delhi’s opposition to Israeli Occupation, hasn’t changed. Nor has its advocacy of two states within the 1967 borders, altered.

Any hope cherished by Netanyahu of radical changes have been dashed. Modi may be a “dear friend” who’s opened up India’s defence and military wallets by expanding huge new contracts with Israel, but politically, remains on tenterhooks, walking on eggshells.