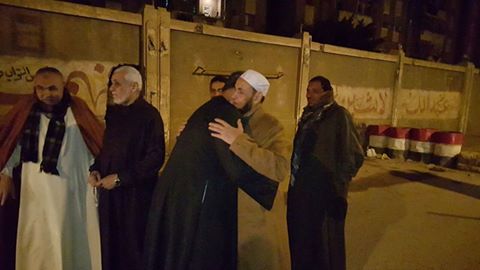 He had been held there without charge for the past 16 months, since December 2014, when he travelled to Cairo for family reasons. His son Bilal was also arrested at the time but released within a few days.

Via a series of #FreeBassiouni campaigns, the MRN and civil society in conjunction with members of the Bassiouni family, kept agitating for his unconditional release.

The MRN shares the joy of his family and hundreds of learners at the various educational centers set up by him in informal settlements across the south of Johannesburg.

We also acknowledge the intervention made by SA’s embassy officials in Cairo which included consular access.

In welcoming his release and freedom, we are mindful of hundreds of pro-democracy activists, many belonging to the outlawed Muslim Brotherhood, who remain languishing in jail. Since the military coup engineered by Gen Abdel Fattah al Sisi, Egypt has returned to an era of repression and state terrorism.

Sheikh Bassiouni’s unlawful arrest and detention without trial, caused great concern and anxiety amongst his family and friends. It was compounded by the fact that his health deteriorated as a result of access to medical care being denied.

The MRN is confident that further details of Sheik Bassiouni’s harrowing experience will be released once he returns home and obtains the necessary medical care.