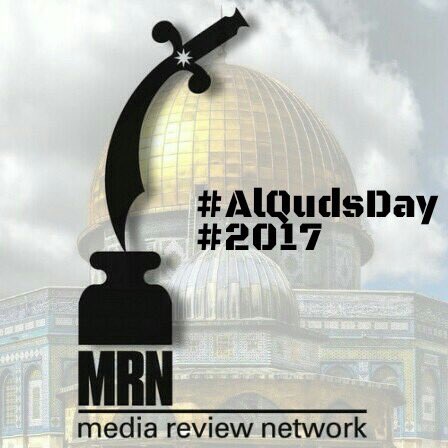 In August 1979, Ayatollah Rohullah Khomeini declared the last Friday of the Holy Month of Ramadaan as Al Quds Day (Jerusalem Day). He called on Muslims all over the world to unite in solidarity with the Palestinians against the Zionist, colonial entity of Israel.

Since 1979, it has become the moral duty of every human being, with a conscience of justice, irrespective of religious affiliations, to rally against the illegally created Zionist unit, and to support the liberation of Palestine and Jerusalem from Zionist oppression, subjugation and ethnic cleansing.

The Zionist script, which is an extension of colonialism and a form of Apartheid is unique in the history of humankind and has not changed. The first wave of expulsion in 1948 was followed by many more; all intended for the ethnic cleansing, genocide and forced expulsion of the indigenous Palestinians from their homeland.

The script also includes the ultimate changing of the demographic nature of the region and the city of Jerusalem. This is accomplished by importing migrant colonialists from Europe and encouraging them to steal more Palestinian land and demolishing Palestinian homes and farms.

The definitive target is to Judaize the city of Al Quds by removing the Islamic, Arabic and Christian characters of the city. Its policy remains inflammatory.

Israel’s strategy in Al-Quds is a clear violation of international law, numerous resolutions of the Security Council and the UN General Assembly, concerning the rights of the Palestinian people.

This Al Quds Day commemoration should also serve as timeous reminder that the situation in Palestine was planted and nurtured in Europe by the infamous Balfour Declaration of 1917. At that time, Palestine was ready for its independence. Instead the treacherous Mr. Balfour pledged his support for the Jewish people in Europe, in their efforts to establish a Jewish homeland in Palestine.

The Media Review Network calls on the international community including Saudi Arabia, Bahrain, UAE and Egypt to challenge the legality of the system of Zionism. It is only by challenging the system that the true nature and the colonial undertones of Zionism will be unmasked.