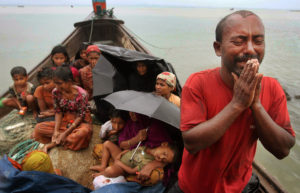 Is the crisis facing Rohingya Muslims over?

Heart wrenching images of feeble old women, little babies and desperate toddlers fleeing from a marauding Burmese military may have moved off TV screens, but does it mean that their plight is over?

Close to a million Rohingya are huddled in miserable conditions across Myanmar’s border in Bangladesh. They fled there – not because they voluntarily decided to migrate – but due to a deliberate pogrom calculated to drive them off their ancestral homes and lands.

The perpetrators responsible for this horrific ethnic cleansing are seemingly oblivious of their criminal conduct. Such contemptuous behaviour is usually associated with large chunks of impunity. Their mirror image is Israel where war criminals in high office believe that they are untouchable. Taking their cue from Israel, Burmese military feel confident that notwithstanding a global outrage against their wanton brutality, the storm will pass.

Indeed the storm will pass if global solidarity movements confine their responses to alleviating the humanitarian situation without confronting the political animals responsible for it.

The interventions to provide basic health care, shelter, food and education are necessary, but to draw a line there without tackling the root cause for the catastrophe engulfing the Rohingya, is exactly what Aung San Suu Kyi’s regime desires.

As is widely known, Suu Kyi has displayed annoyance with media and human rights groups for unsettling her so-called credentials as a “freedom-loving democrat”. Taking the gaze off her and the responsibility she has to restore the honour, dignity and freedom of Rohingya Muslims, would be tantamount to allowing the storm to pass.

Living in perpetual poverty as “stateless” people with no certainty that they will be allowed to return home cannot and must not be an option. It is an injustice to ignore or downplay their right to return. Just look across the Middle East to see the agony and despair caused to Palestinian refugees whose rights to return have been trampled by Israel for seventy years despite UN resolutions.

Thus to delink the Rohingya crisis from politics and view it solely as a humanitarian issue, plays into the hands of Suu Kyi and the Burmese military chiefs. That the pitiful misery of a million or more Rohingya Muslims is caused by an intolerant and belligerent faction of Buddhist monks whose Islamophobic views enjoy the support of the military and the government, must neither be forgotten nor removed from the equation.

By the same token it can be argued that the Security Council of the United Nations has failed to intervene. Issuing statements without displaying any serious resolve is merely a sop to deflect from its failure of ensuring that criminals be held to account for the mass killings. Yet again one may justifiably question the relevance of the International Criminal Court if its legal institutions fail to provide security and justice for the Rohingya.

Countries such as India and Israel have not backed off from supplying weapons to Burma. Their shameless conduct is reprehensible. Particularly outrageous and thus not surprising is the fact that neither of the two rightwing leaders – Modi and Netanyahu, have the credentials to speak out against human rights violations. Just as Aung San Suu Kyi is saddled with the question of the Rohingya, Modi and Netanyahu carry the albatross of Kashmir and Palestine around their necks. This troika represent political ideologies which are intertwined for they share repulsive values such as exclusivity, racism, apartheid, and ghettoizing populations of a different creed.

Unfortunately for the Rohingya, uprooted and displaced by a political elite who are emboldened by the alliance of India and Israel, the future looks bleak. Having to contend with less than ideal conditions in Bangladesh’s refugee camps without any recourse to justice is an indictment of the powers that the international community possesses but fails to exercise.

“The Rohingya are the wretched of the earth,” said Leonard Doyle, a spokesman for the International Organization for Migration, the agency helping coordinate relief efforts. “Nobody wants them. I’m talking about 7-year-olds who have witnessed their parents get their throats slit who are standing in bare feet on the border right now, asking: ‘What’s going to happen to me?’”

A recent New York Times report talks about how Myanmar was stalling efforts to help the Rohingya. Hardly surprising considering how this crisis started. Witnesses have described, how Myanmar’s army burned down Rohingya village after Rohingya village, terrorizing and massacring civilians — of any age, including infants — with one apparent purpose: to erase the Rohingya from the landscape.

The report sheds light on how Myanmar’s leaders steadily stripped away their rights, making it extremely difficult for Rohingya to get a government job or a passport, go to school or even be legally married. Government soldiers preyed upon them; revered Buddhist monks openly called them insects and snakes.

The criminals responsible for the horrific massacres and ethnic cleansing have to face prosecution, not the luxury of remaining in a position to act as judge, jury and executioner.