STOP PERSECUTION OF WOMEN IN HEADSCARVES OR IDHUKU 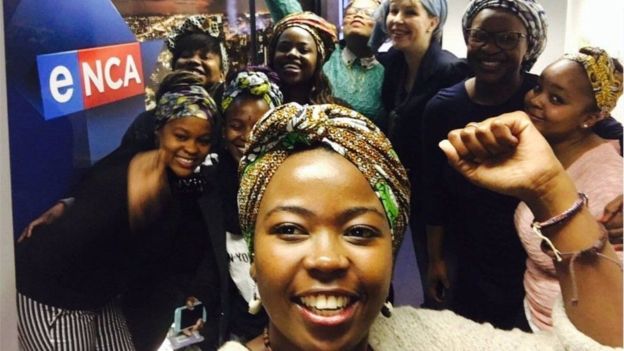 It is surprising that twenty five years into our democracy and taking immense pride in being told that South Africa has the most progressive Constitution, women are still regularly harassed and persecuted for wearing a headscarf.

The two most recent incidents reported in the media, one that went viral on social media that involved a Muslim student at OR Tambo airport on her way to Cape Town, and the other a major at the SA Defense Force (SANDF), a forensic pathologist, who was asked to remove her headscarf after wearing it for 10 years in service at the same department.

A debate whether idhuku is appropriate for television or not raged in 2016, when an eNCA reporter’s story was allegedly removed because the reporter wore a doek?

The SA Constitution, sensitive to our oppressive history that undermined the dignity of Black majority, acknowledges our multicultural and multifaith society with laws that allow all South Africans to freely practice their culture and religion.

The SA Constitution, which provides for eleven official languages, allows cultural and religious observance in state institutions and protects both the individual and group right to culture, promotes inclusivity and accommodates difference.

Hence, it is perplexing that the practice of  women wearing head covers and veils for cultural and religious purposes as an integral part across all cultures and faiths should be an issue at all.

In Africa the headscarf is known as iduku in isiZulu, dhuku in Shona (Zimbabwe), duku in Chichewa (Malawi), gele in Yoruba (Nigeria), onderdooekie in the Cape and hijab in Arabic (North Africa). Wearing a doek or covering your head holds deep cultural meaning and symbolism; from showing respect to marking one’s status.

The late anti-apartheid stalwart and heroine Winnie Mandela, Minister Naledi Pandor and former Speaker of the National Assembly Baleka Mbete generate excitement at special events with a range of different fashion statements regarding the idhuku.

Idhuku also featured prominently during the #FeesMustFall protests in 2015, with student leader Nompendulo Mkhatshwa consistently donning a doek in various media appearances. Reportedly, “when she realized its impact she began to embrace it as her crown as a young black female in a leadership position.”

Idhuku are traditionally worn by married Zulu women, especially during religious and cultural ceremonies. The iconic Basotho cone -shaped hat mokorotlo depicts a mountain top symbolising the unification of Lesotho, worn by both men and women.

The iqhiya is traditionally worn by married Xhosa women. In Xhosa culture, a new bride cannot address elders bare-headed and thus wears a black iqhiya as a sign of respect towards her elders and in-laws – like the Zulu culture, barring the doek’s colour.

In Limpopo and Kwa Ndebele, the amacubi is a head covering that can be in the form of a beaded headband or a knitted cap. For a Sotho traditional wedding, in-laws give the makoti (daughter-in-law) ituku, as a sign that she has been accepted into their family.

The US slave trade during the colonial era headwraps were imposed on black women as a badge of enslavement by white masters. In this way, the head covering was used to distinguish between black people without power from those who held it.

Regulating the dress code of the black population allowed white society to feel in control. Following the bloody civil war the headwrap quickly became a way for black women to reclaim their own sense of humanity. What was once a simple cloth meant to reinforce the lowly status of black Americans is now a powerful expression of identity.

French and British colonizers encouraged Muslim women to remove the veil and emulate European women. Consequently, in North African and Middle Eastern countries, the veil became a symbol of national identity and opposition to the West during the struggle for independence and freedom.

In many European countries there is a debate about what Muslim women can wear, which has been stoked by rising anti-Muslim rhetoric fuelled by far-right movements that play on fears of insecurity and national identity.

South Africans cannot, after the long and painful struggle against the crime of apartheid, allow our institutions to succumb to the xenophobic tendencies of aversion, fear or dislike of other cultures and beliefs.

As the case of major Fatima Isaacs goes to court, the law must be absolutely unambiguous in respecting all cultural practices.

The  idhuku, doek, or hijab should acquire significance as a form of self and communal identity and as a badge of resistance against a colonial legacy, proudly and publicly worn.