War Mongers: “Leaders of the World”

Why is it that war criminals in their capacity as heads of states who despite being consistently in breach of global conventions governing human rights, are treated as royalty?

What sets them apart from common criminals by having red carpets rolled out and celebrated with pomp and glamour?

Do they belong to a special class of untouchables? A distinct class who enjoy status, privileges and worst of all, immunity.

To list them is not difficult, for not only are they prominent as they parade on global arenas like proud peacocks, they are feted as celebrities too by no less than members of mainstream media.

Sounds difficult to comprehend and quite inexplicable that supposedly informed media personalities would find it difficult to haul such criminals over the coals.

Tough and robust interviews to interrogate, shame and humiliate thugs who masquerade as leaders seem not to matter anymore. Instead embarrassingly, journalists find it cool to jostle with each other to obtain – wait for it, not a scoop but a selfie! 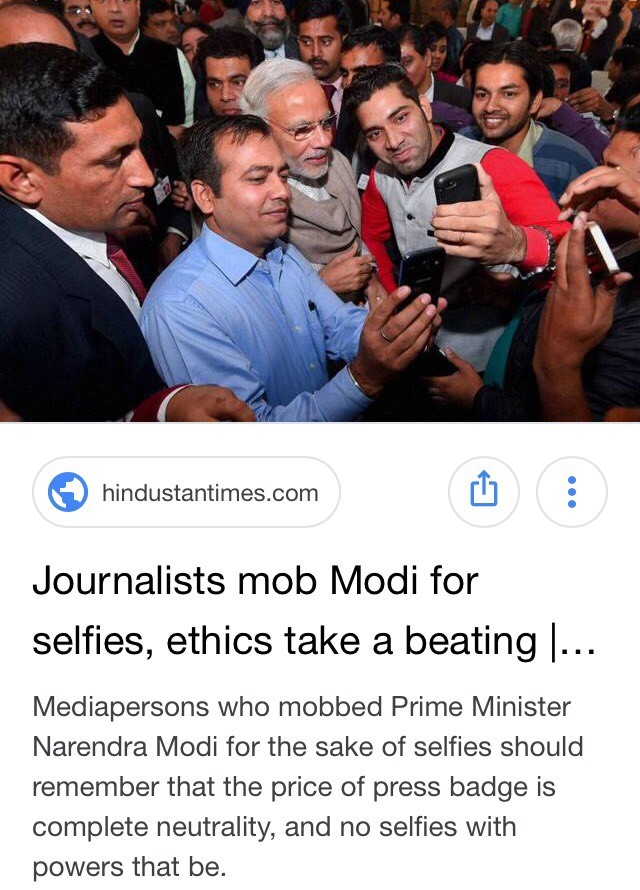 From Delhi to Tel Aviv; from Riyaad to Dubai; from Rangoon to Beijing; from Cairo to Washington, the misfits who claim to be leaders of their respective nation states are no more than usurpers causing untold harm to millions under their brutal reign.

Whether its Narendra Modi or Benjamin Netanyahu, the endless list of crimes committed by them including gross human rights violations ought to have them face prosecution at the Hague. Instead they are revered as respected leaders without any accountability. 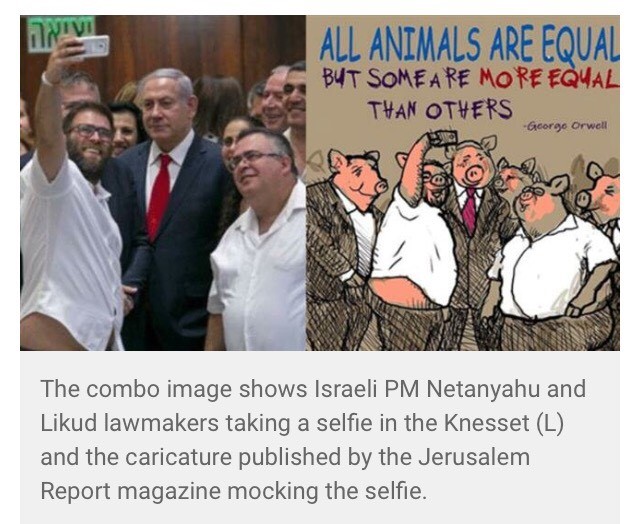 Kashmir and Palestine – despite the weight of international law being on their side, share a bitter experience of having their rights ignored by the United Nations. Their occupiers, India and Israel are brutally repressive and utterly unmindful to the point of being dismissive about repercussions from international bodies such as the United Nations.

India is among Israel’s biggest importer of arms and Modi’s security forces have been receiving training for “anti-terror” operations which Netanyahu’s regime conducts against Palestinians.

Widespread suppression of freedoms and fundamental human rights are conducted within a post-9/11 framework which is defined as defeating the “scourge of Islamic terrorism”. It is this manufactured terror frame which is sold to the world to justify the aggressive nationalisms of Zionism and Hindutva.

India and Israel thus inaugurate the colonial occupations of Kashmir and Palestine.

As the “Butcher of Palestine”, Netanyahu continues plundering land and destroying lives via ethnic cleansing. His overt apartheid policies are cheered on by over-zealous supporters, who have allied themselves with white supremacists in Europe and America. 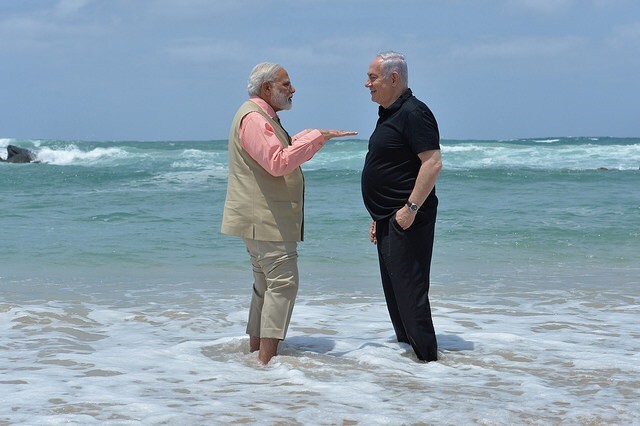 It is a shame that the world is adorned with ethno-nationalist presidents and prime ministers whose ideologies are defined by racism and religious extremism.

Some gain power by ostensibly “democratic” means, while others via hereditary privileges which enthrone them as “kings”, “princes” and “emirs”.

The Arabian Peninsula is littered with unelected despots and tyrants who masquerade as leaders. The impunity associated with their iron-fisted rule makes a mockery of religious values they supposedly subscribe to.

While Saudi Arabia, United Arab Emirates, Bahrain and other Gulf fiefdoms claim to be Muslim governments, their representation of Islam is far removed from its pristine teachings. Neither civil right activists nor political opponents are tolerated in these oligarchies.

The brutal murder of Jamal Khashoggi and the circumstances which led to his death, illustrates the rogue conduct of Mohamed bin Salman. Yet despite evidence which implicates his direct complicity, MbS is feted as a “moderate” and embraced on global platforms. 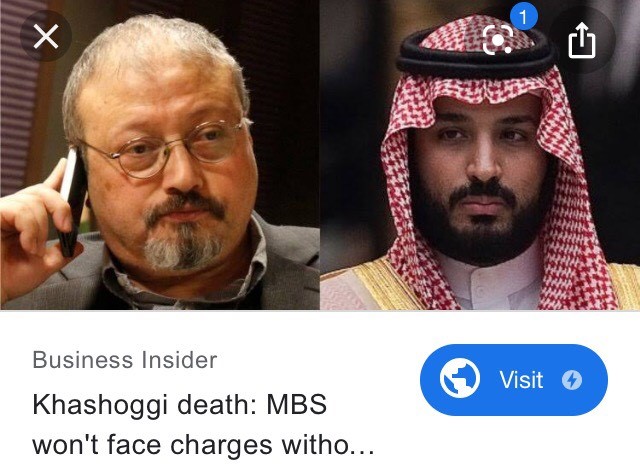 The devastation caused in Yemen by Saudi-led war is yet another example of literally getting away with murder. MbS and his Emirati side-kick MbZ have since 2015 wreaked havoc leading to the UN declaring Yemen to be the world’s largest humanitarian catastrophe. Human rights monitors report that the Saudi coalition has conducted scores of indiscriminate and disproportionate airstrikes killing thousands of civilians.

That this illegal war has failed to achieve any of the coalition’s goals apart from reducing Yemen to ashes, seems of no concern to the warmongers, as they continue exacerbating crisis after crisis by blowing up civilian targets. Saudi Arabia’s status as a client-state of America and having inched closer to publicly embracing the Zionist project which dispossessed Palestine, leads MbS to believe that repercussions if any, will be limited and managed by Trump. 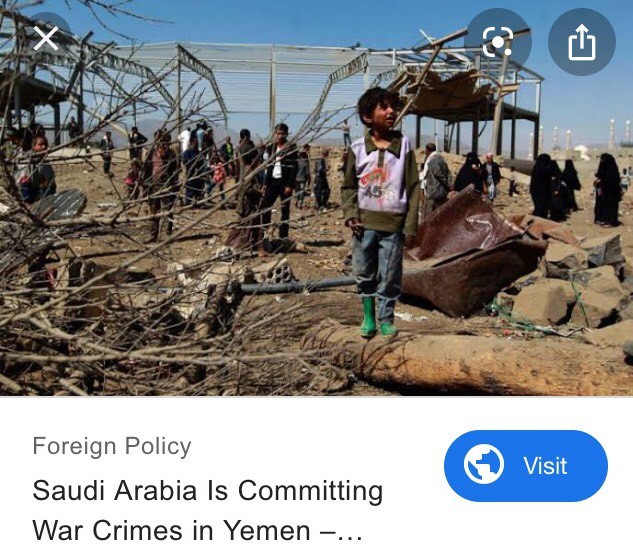 War crimes indeed! Yet despite going on unabated for four years, the criminals responsible for it are sought after as “celebrities” instead of facing prosecution and lifelong jail terms.

Turning our gaze to Myanmar, it is necessary to repeat the question Mehdi Hasan eloquently poses: why hasn’t Nobel Peace Prize laureate Aung San Suu Kyi been indicted for war crimes and genocide at the International Criminal Court?

Two years have passed since the Burmese military launched a renewed campaign of terror and violence against the Rohingya Muslim minority in Myanmar’s Rakhine region. Documented evidence point to dastardly crimes committed as Hasan reminds us: “Rohingya men hacked to death; children burned alive; women and girls raped and sexually-assaulted in their hundreds and thousands. Scores of villages were pillaged and razed to the ground as more than 700,000 Rohingya were driven from their homes.” 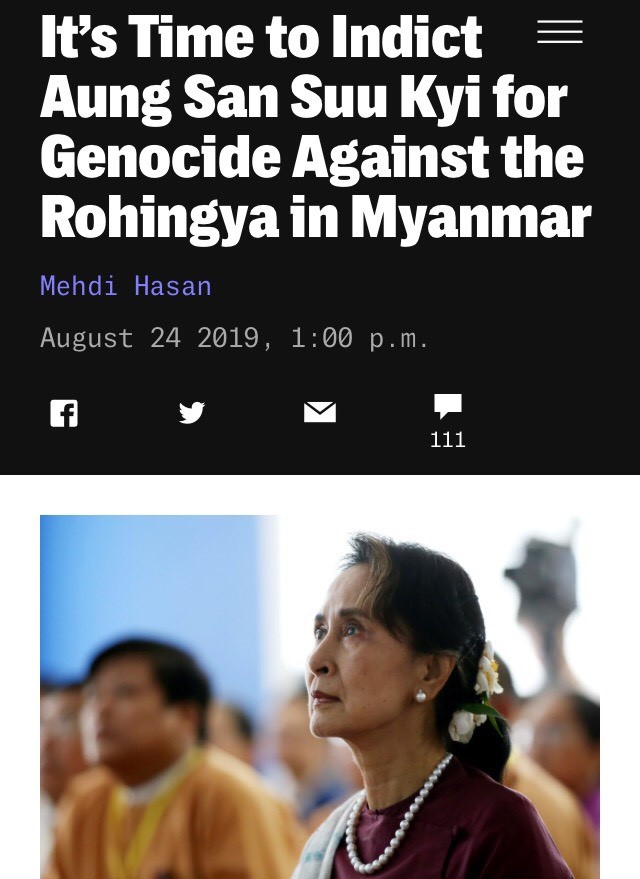 In listing some of the corrupt “leaders” engaged in genocidal crimes against their own populations, others and those occupied by them, does not suggest that the list is complete. Egypt’s military leader who may now have donned a three-piece suit, cannot escape the fact that his ascension to power was via a violent bloody coup. General Abdel Fatah al-Sisi was America’s chosen candidate to betray Egypt’s revolution by deposing its only democratically elected leader Mohamed Morsi and placing the entire country under siege.

Not surprisingly, the rogue elements who financed and supported the overthrow of Morsi, banned the Muslim Brotherhood and imprisoned its leaders along with thousands of civil rights activists, journalists and opponents, are none other than Bin Salman, Bin Zayed and Netanyahu.

Sisi’s authoritarian rule has crushed democracy and taken the country back to a state of emergency which Egyptians revolted against and succeeded by removing the tyranny of Hosni Mubarak. Paradoxically, instead of facing the wrath of ICC prosecutors, Sisi has been rewarded with the chairmanship of the African Union – much to the shame of the continent.

Why, one may ask has the world allowed murderers to hold high office with impunity? Is it due to the current construct of global politics being skewed in favour of the rich and powerful? Is it as a result of the ease whereby corruption at all levels of society allows manipulation of  political power? Or is it a combination of both and more that says to Modi, Netanyahu and fellow warmongers: go on, your fascist policies are untouchable?