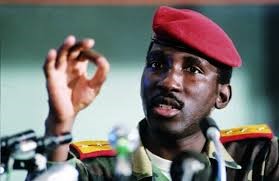 Thomas Isidore Noel Sankara was born on 21 December 1949 and he died on 15 October 1987. He was a Burkinabe revolutionary and President of Burkina Faso from 1983-1987. At the age of 33, Sankara became the President of the Republic of Upper Volta. His parents were Marguerite Sankara and Joseph Sankara. He was born in the town of Yako.

It has been 30 years since the assassination of Africa’s last revolutionary leader, Thomas Sankara.

“Who killed Sankara?”. This question has swirled since October 15, 1987 when the charismatic army Captain was killed in a bloody coup in Burkina Faso which brought to power his one-time close friend Blaise Compaore.

“We are hopeful that this question will eventually be answered. Across Africa this issue has not been elucidated. We hope that we will be able to find a solution, a definitive ruling to address this problem”, Burkinabe President Roch Mark Christian Kabore declared upon coming to power. Compaore blocked any attempt to seek the truth about Sankara’s murder during his years of rule. For example, his regime issued a death certificate claiming Sankara died of natural causes.

If he were still alive today, Thomas Sankara would be 70 years old. If the average age of African presidents is anything to go by, Sankara may still be Burkina Faso’s leader. That is not to say Sankara would have loved to hold on to power since 1987 or that his people would have even wanted him to. Find below some of the notable achievements of the late President Thomas Sankara.

When 33-year-old Thomas Isidore Noel Sankara became the leader of Upper Volta (he later changed the country’s name) in 1983 after a coup, the young man’s ascent to power was marked by metaphorical and practical invigoration. The assassination of the man they called “Africa’s Che Guevara” marked another unfortunate phase of self-sabotage Africans have strangely chosen since the 1960s. Sankara is, unfortunately, one of many who were undermined by their own. Patrice Lumumba of Congo and Kwame Nkrumah of Ghana come to mind. They were challenging their Africa with new ideas. Their Africa was plotting to see their ends. Years later, their names become reference points for continental studies on governments that entertain collectivist visions of nation-building. They are shown so much love in death.

In Sankara’s time, the food Burkinabes needed had to be produced in the country. Interestingly, in less than three years of his four in office, Burkina Faso was self-sufficient. He insisted on land redistribution and forced the professional middle class to be cognisant of Burkina Faso’s overwhelmingly poor majority. He was a campaigner against female genital mutilation (FGM), required roles for women in worker brigades and said of women’s rights “We do not talk of women’s emancipation as an act of charity or because of a surge of human compassion. It is a necessity for the triumph of the revolution. Women hold up the other half of the sky.”

Sankara’s time as head of state marked a total rejection of foreign aid from Western donors. He categorically told other African leaders that they were ceding to imperialist and neo-colonial interest. He was ahead of his time and for that, there were enemies to be made within his country and outside. But the betrayal of those closer is obviously worse. Compaore would take over from Sankara and rule as a military and later civilian leader until 2014.

The life and betrayal of Thomas Sankara is not a thing of the past. Western powers still find parties who are willing to acquiesce to projects inimical to Africa’s benefits. The continent deserves better and it is a venture that requires introspection. We need to stop betraying the “beautiful ones like Captain Thomas Sankara”.