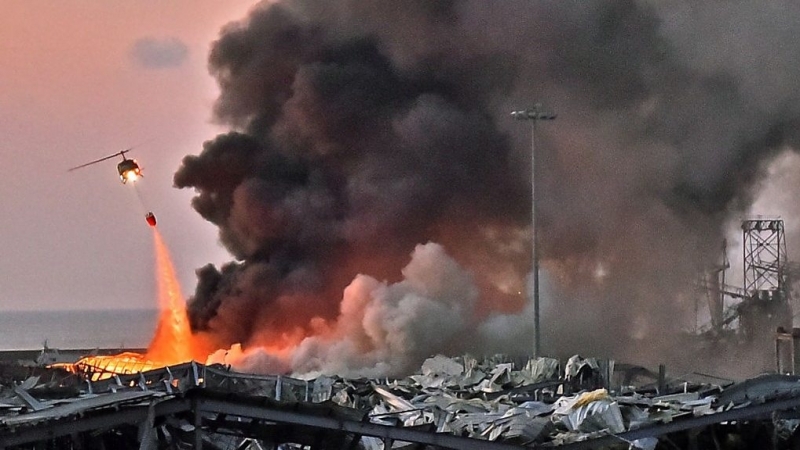 Rated as one of the largest non-nuclear blasts in history, it killed and injured thousands of people, levelled the Lebanese capital’s port, leaving more than 300,000 people homeless, destroyed its wheat and grain stockpiles, all at a time when the country is struggling both financially and politically, and facing the Covid pandemic.

Notwithstanding what or who sparked the explosion, it was the chilling threat by  Zionist Israel’s leader Bibi Netanyahu, who warned: “We hit a cell and now we hit the dispatchers. We will do what is necessary in order to defend ourselves. I suggest to all of them, including Hezbollah, to consider this…These are not vain words; they have the weight of the State of Israel and the IDF behind them and this should be taken seriously.”

Israel has a long history of destabilising, invading and occupying Lebanon for decades. It occupied Lebanon for 22 years, from 1978 to 2000. Israel still occupies the Sheba farms. It bombed Lebanon for 33 days in 2006 destroying  much of its infrastructure and continues to violate its airspace, and murders civilians through its drones with impunity.

In 2006 Israel devised a military strategy known as the Dahiya Doctrine, where the misnamed Israel “Defense” Force inflicted massive destruction of civilian infrastructure and the use of “disproportionate power” against their adversaries.

The doctrine is named after the Dahiya neighbourhood of Beirut, where Hizbullah was headquartered during the 2006 Israel invasion. This Israeli savagery has been repeated in its attacks on Gaza, whilst groups of Israelis gathered each evening on hilltops close to the Gaza border to cheer, whoop and whistle as bombs rained down on people in a hellish war zone a few kilometres away.

Just as reprehensible is the retort by the leader of the “Israeli” Zehut party, Moshe Feiglin who said: “I am happy with the scene of the Beirut explosion. This joy was given by God to the Israelis on the occasion of the Jewish Valentine’s Day that started yesterday and ends today.”

The United States of America had its own version of the Dahiya Doctrine, as demonstrated by the “shock and awe” murderous onslaught against Iraq in 2003, fabricating claims of weapons of mass destruction.

The war started with a month of massive bombing–followed by a four-day ground war. The USA coalition dropped 88,000 tons of bombs, equivalent to over seven Hiroshimas. Hundreds of thousands of Iraqi people, civilians as well as soldiers, were killed or injured.

Bombings destroyed much of Iraq’s infrastructure–including bridges, electrical plants and water treatment plants. Without sewage treatment millions of civilians continue to die of disease after the war. Air Force strategists admit this was a deliberate strategy–to give the United States leverage over Iraq by destroying facilities that could only be repaired with foreign assistance.

There has been a systematic, Western -orchestrated destruction, destabilization and regime change in Afghanistan, Iraq, Libya, Lebanon, Syria and Iran, primarily to maintain Western hegemony over the oil supplies and to protect the Zionist entity. The West and its surrogates have always played the divisive sectarian and tribal card to maintain inter- Muslim conflict.

The lies and deception are being replayed, with the same actors, the same plot and the same aim in the Muslim East. The same scenario played out in Iraq, Libya, Syria and now Lebanon.

To this end, the February 2011 NATO intervention was accompanied by a concerted media campaign which promoted the line that its objective was to protect the Libyan people from massacres by Muammar Khadhafi and to bring about democracy and respect for human rights. Libya has since been ruled by a patchwork of rival heavily armed gangs that have sown terror in the population, turning it into a failed state.

Syria followed after Afghanistan, Iraq and Libya. The so-called ‘Caesar Act’ came into force imposing sanctions Syria with Secretary of State Mike Pompeo served notice that additional, more punishing, sanctions were to follow. Similar sanctions were imposed on Iraq, setting the stage for the invasion and occupation of the country and the killing of over one million of its citizens.

American administrations impose sanctions, strangulating embargoes and a series of counter-revolutionary, state-sponsored acts of terrorism and sabotage with the deliberate intention of grinding down the mass of the people of the targeted country and worsening their suffering, in the hope that this will provoke them to rise up against their ruling regimes and overthrow them.

In Syria, the proxy armies came from the combined forces of the regional USA allies in the Gulf, financed by Saudi Arabia and United Arab Emirates.This USA openly declared a ‘New Middle East’, subordinating every country of the region, by reform, unilateral disarmament or direct overthrow.

In fact, not long after the 9/11 attack, former NATO general, Wesley Clark, exposed US global war plans stating: “[W]e’re going to take out seven countries in five years, starting with Iraq, and then Syria, Lebanon, Libya, Somalia, Sudan and, finishing off, Iran.” All these countries are on the Pentagon’s drawing board. These seven countries have directly or indirectly been the object of US aggression.

Israel has carried out several attacks on Syrian and Lebanese targets, hoping to pull Hezbollah into a military confrontation. US President Trump was virtually the only world leader to go public and called the massive Beirut blast a “terrible attack” and a “bomb of some kind.”

The war on Syria and Lebanon is a proxy war against Iran, the final NATO target. If the Arab and Muslim world does not reform its political system based on the colonial-era tribal and sectarian structure designed to create perpetual conflict led by corrupt elite and despots, there will be unceasing regional chaos, strife and suffering.

DR FIROZ OSMAN is an executive member of the Media Review Network, an advocacy group based in Gauteng.