Is ISS (Ins for Security Studies) an Echo Chamber for war in Mozambique?

Despite the concerns raised by Amnesty about wide-scale human rights abuses by Mozambique security forces, including detention/torture of journalists and civil rights activists in Cabo Delgado, it seems not to matter to the Institute of Security Studies (ISS).

Instead the ISS is fixated on propagating the alarmist notion that ISIS (read Muslim extremists) are causing havoc there and warning that unless the South African government commits soldiers in a war alongside Mozambique forces, the threat of “Islamist terror” will engulf South Africa.

ISS spokespersons are on record insisting that South Africa, SADC and the AU have an obligation to join forces with Mozambique in fighting ISIS. Strangely though, media interviews failed to elicit evidence from ISS of the existence of ISIS. 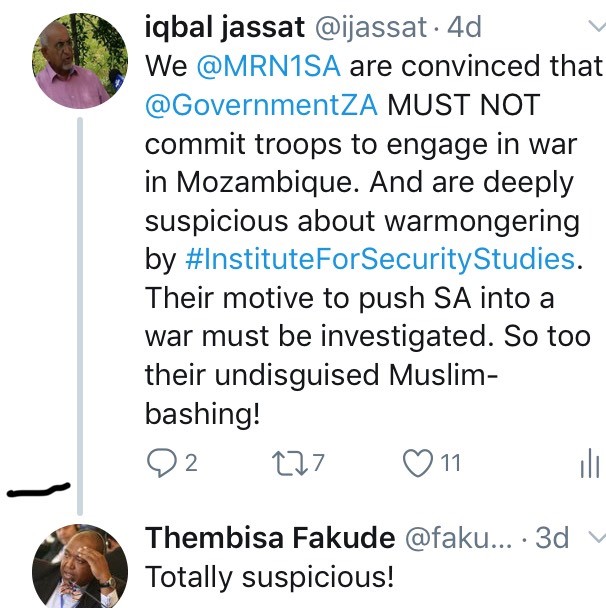 This does not surprise us because the ISS narrative is entirely based on conjecture, speculation and slanted in ways which give rise to Islamophobia or simply put: Islam-bashing.

One of the leading fear-mongers is Martin Ewi, ISS regional coordinator for Southern Africa. His allegations about “ISIS sleeper cells” in South Africa have been lapped up by some media platforms despite his inability to provide evidence. 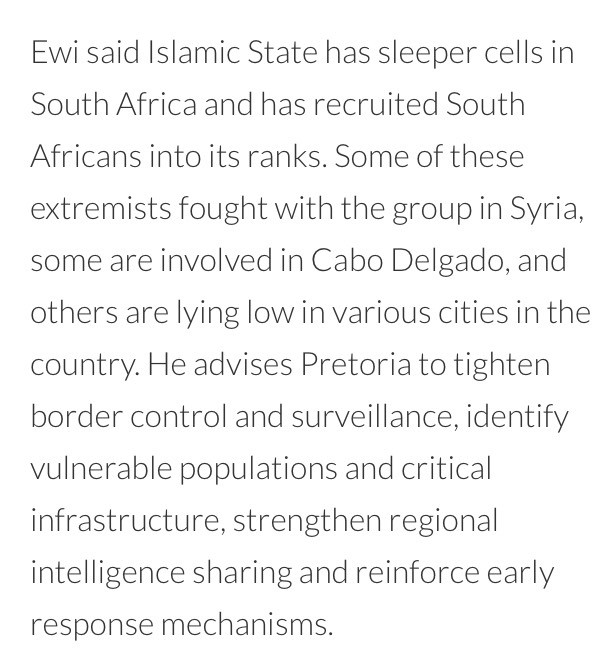 Ironically it’s ISS not ISIS fanning the flames of war.

The absence of context especially with regard to the forced displacement by Mozambique authorities of settled communities to clear the resource rich North for the benefit of multinational corporations such as Total, is a disgraceful display of unprofessional conduct by ISS. 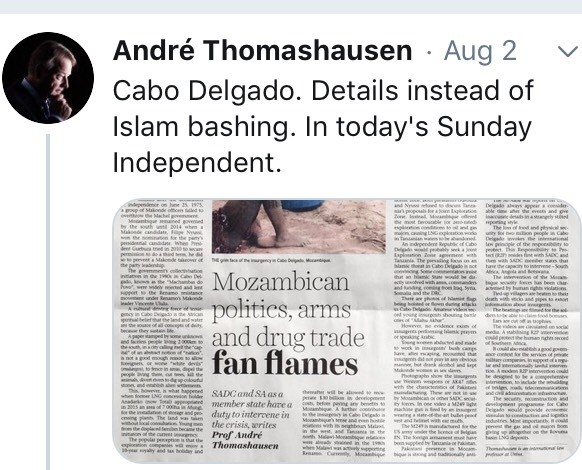 That ISS has been silent on or downplayed the illegal deployment of notorious mercenaries from South Africa and elsewhere who are armed to the teeth including air-power, and their destructive role in Cabo Delgado, raises concerns about its motives in fueling Islamophobia.

Alex Vines in a recent article noted that the Cabo Delgado crisis has been the subject of four reports and one book. According to him, apart from highlighting the complexity of the crisis, few offer solutions.

However of concern is the report “The Mozambique Conflict and Deteriorating Security Situation” by the Tony Blair Institute. Vines points out that it advocates for international military “assistance”. Blair is the former British Prime Minister who allied with George Bush in America’s discredited “war on terror” resulting in horrendous war crimes committed in Afghanistan and Iraq.

Having adopted the role as an arms merchant, it is expected that Blair’s Institute will seek to internationalize the conflict by emphasizing the need for war. ISS is thus echoing his call without any regard to the underlying grievances the region’s population justifiably has against the Mozambique government.

The last thing Cabo Delgado requires is an echo chamber clamoring for war.