ALASSANE OUATTARA A FAKE DEMOCRAT AND PUPPET OF FRANCE. 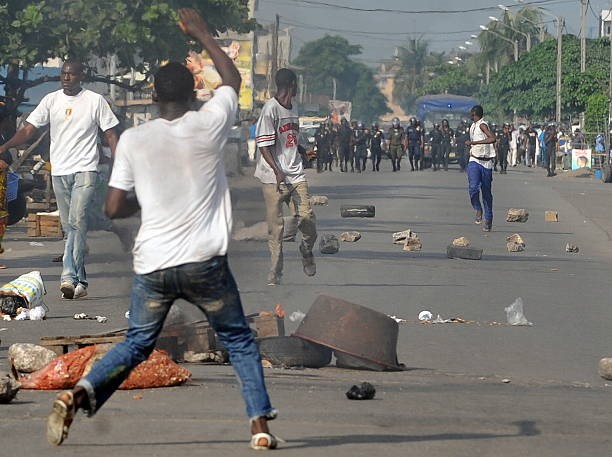 One wonders why African leaders are always making fools of themselves in front of the other world leaders. From the 1990s, many African countries adopted the American political system whereby a president is elected for two 4- or 5-year terms and thereafter, leave power altogether. Many African countries rushed to amend their countries constitutions to accommodate this as law but 10 years later, many are beginning to renege and are busy amending their constitutions to reverse the same. The likes of President Alpha Conde of Guinea, President Museveni of Uganda, President Paul Kagame of Rwanda, and recently, President Alassane Ouattara of Ivory Coast.

This article zooms into the behaviour of one African leader Alassane Ouattara of Ivory Coast as an example. Ivory Coast is emerging from a civil war in 2002 and the country was split in two, the north held by rebels and the south by forces of then-President Laurent Gbagbo. At least 30 died in clashes in the lead-up to the vote, reviving fears for many Ivorians of a repeat of the West African nation’s 2010-2011 post-election crisis when 3,000 people were killed. Tensions erupted in August when Ouattara, in power for 10 years, announced he would run for a third term, angering opposition leaders who dismissed it as an unconstitutional “electoral coup”. Opposition leader Henri Konan Bedie, an old Ouattara adversary, called for an active boycott and a campaign of civil disobedience to halt or disrupt the election.

Thousands of opposition supporters had rallied in Abidjan to protest Ivorian President Alassane Ouattara’s plan to seek a third term, as tensions rose in the lead-up to the country’s high-stakes election. Three weeks before the October 31 vote, some 20,000 people made their way into a stadium in Ivory Coast’s commercial capital by early afternoon on Saturday, with some holding banners reading: “The people say no to an illegal third term.”

When President Ouattara was in opposition politics, fighting former President Laurent Gbagbo, we thought, that he was the democrat that was going to bring change to his country and indeed, the rest of Africa. But that was never to be so. The first bad sign was when he allowed the French Army to intervene on his behalf against former President Gbagbo, and what followed was the humiliation of Mr. Gbagbo and his wife after their capture by the French Army. He concocted a lot of lies against former President Gbagbo and handed him over to ICC in the Hague to be prosecuted.

Ouattara, 78, announced in August he will seek another term after the sudden death of his handpicked successor the previous month created a leadership vacuum at the governing RDHP party.

The president’s decision infuriated the opposition who says Ouattara is violating the constitution by seeking another term. Ouattara, in power for a decade, says a 2016 constitutional change means his two-term limit has been reset.

Amid the rising tensions, envoys from the Economic Community of West African States (ECOWAS) regional bloc, the African Union and the United Nations headed earlier this week to Abidjan where they met officials, the opposition and members of the civil society.

“The joint mission expressed deep concern over the lack of trust among Ivorian political actors,” according to a joint statement from the delegation led by Shirley Ayorkor Botchwey, Ghana’s foreign minister and current chair of the ECOWAS council of ministers.

The delegation “strongly condemned the acts of violence and hate speech with ethnic overtones, which have unfortunately entered the field of political competition and are likely to have a negative impact on the progress made so far in the country”. it said.

This week’s mission was the second by the UN’s special envoy for West Africa, Mohamed Ibn Chambas, who last month called for a “peaceful, inclusive, transparent and credible presidential election” after meeting with President Ouattara.

The constitutional council has cleared him and three other candidates to run, including 86-year-old former President Henri Konan Bedie. Those barred include Ouattara’s predecessor Laurent Gbagbo and former rebel leader and Prime Minister Guillaume Soro, both of whom played key roles in a crisis that claimed more than 3,000 lives after disputed elections a decade ago. Both men are living outside the country but retain powerful support at home.

More than a dozen people have been killed in violent protests in recent weeks, sparking memories of the 2010-2011 civil war that broke out when Gbagbo refused to stand down after the electoral commission declared Ouattara the winner. The International Crisis Group last week called for the election to be postponed and for ballot preparations to be overhauled. “The chances of this election spawning a serious crisis are high,” the independent think-tank said.

We call upon the African Union (AU) to come out and condemn this blatant violation of the constitution of the country. ECOWAS must reign in on Mr Ouattara and tell him that in no uncertain terms will he be allowed to get away with such violation of his country’s constitution. He should also be reminded that it does not pay to be a puppet of the former colonial masters. Mr Ouattara is such kind of leader who receives instructions from Paris to the detriment of his own people.

Unfortunately, at the time of writing this article, the elections were held and Alasane  Ouatarra was declared the winner and the new President of the Ivory Coast.