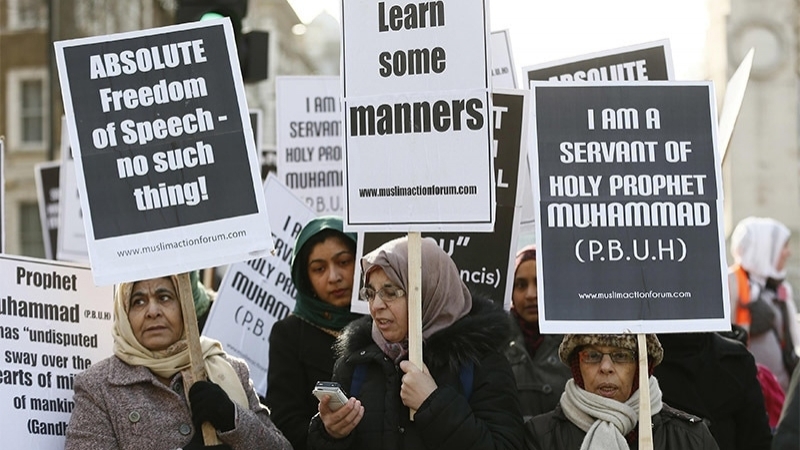 Misreading and deliberately so, the causes for the fury across the Muslim world and remaining defiant in challenging Islam, French President Emmanuel Macron has vowed to “fight to the death”.

In a memorial to honour the teacher who was slain in the wake of Charlie Hebdo’s provocative and offensive lampooning of Prophet Muhammad (may peace and blessings be upon him), Macron militantly gave vent to his emotional diatribe.

And reminiscent of former US President George Bush’s “shock and awe” threats, Macron’s interior minister denounced “Islamist barbarism”. He declared that it’s time for them to feel the “fear and shock” of France’s actions.

The implications are clear: it’s a declaration of war against Muslims and Islam.

Though spun in deceptive language known under the rubric of Culture Talk, words such as “jihadism”, “Islamism”, “Muslim fundamentalism”, “Islamist terrorism”, “Islamofascism” and “Muslim barbarism” – amongst others, Macron along with hard-core right-wing Islamophobes sought to depict their militant stance as defense of secularism.

In a display of traditional Eurocentric hypocrisy whenever hostile elements within Europe find the need to justify their aggressive behaviour towards Muslims who are either citizens or refugees, leaders such as Macron invoke false narratives.

A popular one which is not too different from the Israeli version and which forms part of Trump’s fabrication too, is that “they (Muslims) hate us because they despise freedom”.

In the Macron version, we are often reminded by French officials that France is targeted “because of its reputation as the cradle of human rights and a rampart of global democracy…”

It is against this backdrop that he has willfully downplayed the fact that global Muslim anger stems from the insistence by Charlie Hebdo to provoke, insult, and defy Muslims by republishing sacrilegious caricatures of Prophet Muhammad (pbuh).

Notwithstanding the outrage caused when the blasphemous cartoons were originally published during 2005 in Denmark, that Macron chose to defend and support republication, speaks to his intent to fuel flames of hate.

Ill-will towards French Muslims – both indigenous and migrants from former colonies in Africa and the Arabia Peninsula where France once held sway as a colonial master, is a recipe for disaster.

And to extend the ill-will to the rest of the Muslim Ummah across the entire world by subjecting the honour and dignity of Prophet Muhammad (pbuh), to that of a cartoon character is intolerable.

Far from being an expression of “free speech”, such abominable conduct is a disingenuous abuse of freedoms to cause hurt. Hate-filled venom to attack and assault religious beliefs cannot be condoned. To continue doing so under the guise of secularism, reflects either insecurity or vulnerability or indeed both.

It suggests too that Macron is incapable of reconciling his personal prejudice against Islam with the demands of his presidency to allow the peaceful coexistence of all faith-based communities under a neutral state.

This is evidenced by the direct interference of the state in imposing limitations on Muslims’ ability to exercise free choices. It is the height of irony that in proclaiming the right to freedom of expression for right-wing elements to hurl abuse via caricatures, Muslim females are banned from expressing their freedom of belief.

A 2004 law makes it a criminal offense to don headscarves while a 2011 law disallows face veils.

These draconian laws are to be followed through with new laws Macron plans to introduce to crack down on “Islamist fundamentalists”.

We have thus far seen his government silencing Muslims critical of his crusader – mentality by expelling them. We note too that Mosques have been raided and a number of Muslim NGOs shut down.

The belligerent language used by Macron in describing the aims of the planned new law, has raised fears of the further alienation of French Muslims.

That his speech is littered with threats such as France should “diminish Islamists” and having the audacity to publicly vow that his government “won’t renounce the caricatures”, is no less than a declaration of war.

Macron has thus escalated America’s “war on terror” to France’s “war on Islam”.