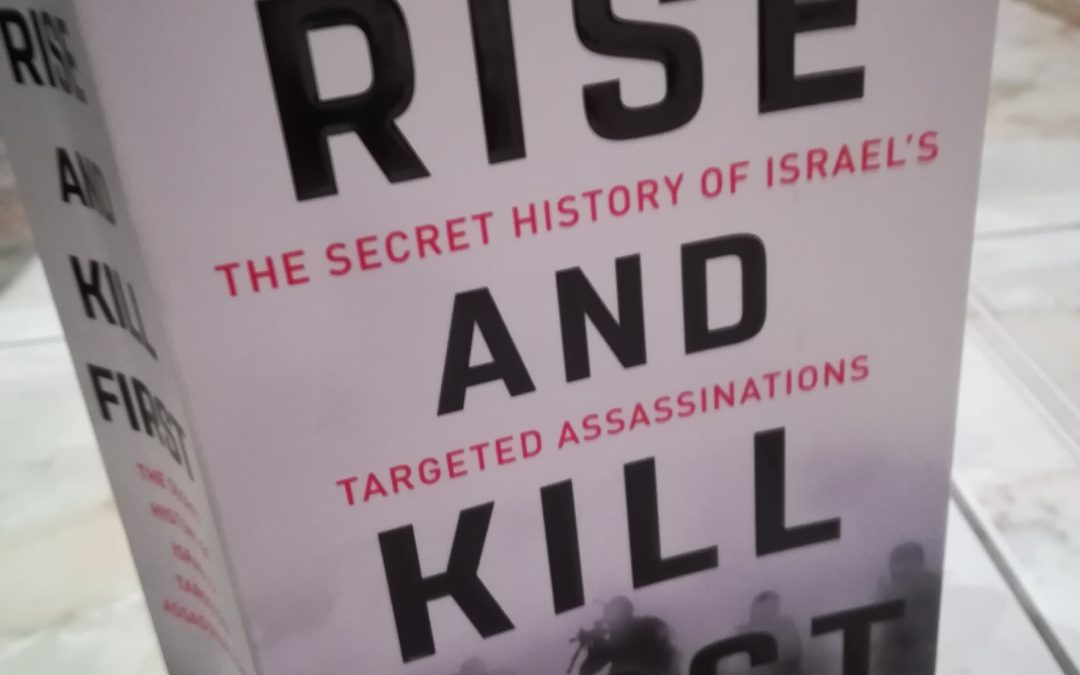 Newsweek proclaimed it “A must read…” while The New Yorker described it as a remarkable account of Israel’s targeted-killing programs.

These positive reviews, in addition to many more of Ronen Bergman’s explosive revelations of Israel’s best-kept secrets on the Mossad, Shin Bet and Aman, underline the significance of his book.

Described as an acclaimed Israeli-based investigative reporter, Bergman is Yedioth Ahronoth’s senior correspondent for military and intelligence affairs. He is also is contributing writer for The New York Times Magazine, reporting on intelligence, security and nuclear issues.

Given that the secrets of Israeli intelligence are protected and subject to a web of complex laws including military censorship and according to the author, intimidation, interrogation and prosecution of journalists and their sources, one would be inclined to credit Bergman for having ventured on this project.

Yet paradoxically his close association with the rightwing Israel lobby group AIPAC, raises questions about his motives. For instance Philip Weiss of Mondoweiss believes that Bergman is not a neutral journalist. He reminds readers of Bergman’s lavish praise of the US-based lobby  which exists to effect blind political support of Israel.

Weiss correctly criticizes the author for being on record as having said to the lobbyists: “You need to… explain to Israelis how much they owe AIPAC… I know that you’ve got our backs. It’s such a great feeling.”

Yet to write a book on one of the most secretive organizations on earth is not only near-impossible, but exceedingly risky. Due to the lack of cooperation from the defense establishment, Bergman sought a Supreme Court order forcing compliance with laws to allow transfer of historical documents to the State Archive. Instead the Court dragged the matter for years and extended the secrecy provisions from fifty to seventy years.

To frustrate Bergman and in efforts to sabotage his research, a special meeting was held in Mossad’s operations division known as Caesarea as early as 2010 before the contract for the book was even signed.

Plans hatched to disrupt the author’s investigation included warnings to Mossad employees as well as orders issued to Shin Bet to take aggressive steps against him.

Perseverance by Bergman led to him receiving thousands of secret documents from insider sources and over a period of eight years he conducted a thousand interviews with political leaders, chiefs of intelligence agencies as well as operatives themselves.

As none of the sources were approved by Israel’s defense establishment, Bergman insists that the book is not an “authorized” history of Israeli intelligence.

In contrast to spin doctoring usually associated with Israel’s attempts to shield itself from justified criticism of its horrible reputation as a serial killer and violator of human rights, Rise And Kill First provides a riveting read detailing shocking facts.

For instance, he gives a blood-curdling account of the genesis of Zionist terrorism prior to the onset of the 20th century. At the time the idea of Israel was constructed on the basis of violence and force, which has not ended as is evident in the daily experience of Palestinians. And borne out by the killings as recorded in the book.

A fascinating history indeed which marked the beginning of the era of Zionism as a political ideology and a tool to exploit Jewish insecurity in Europe characterised by rampant antisemitism.

The book provides gory details of Israel’s unending series of extrajudicial killings and the macabre settings where Zionist “Pharoahs” – leaders of the political establishment, Mossad, Shin Bet, Aman and the IDF – decide who is next to die.

The assassination of Iranian scientists, latest being Prof Mohsen Fakrizadeh, emanates from decisions by the web of killers presided by Israeli elites.

Unlike fiction which enthral readers with thrilling accounts of murder, Bergman’s research of Israel’s now not so-secret assassinations of Palestinians, gives a frightening account of Jewish ideologues of death.

An important takeaway from the book confirms that since its illegitimate imposition on Palestinian land until now, Israel’s leaders have been and remain architects of murder.

The enormous amount of financial and human resources dedicated to developing a sophisticated network of intelligence and security clusters to effect physical liquidation of human beings is proof.

As much as the book reveals information about how agencies within the superstructure issue death warrants, it remains a damning indictment of a regime which presents itself as an embodiment of civilization.

From the botched attempt on the life of Khalid Meshal in Jordan to the assassination of Sheikh Ahmed Yassin blown up in his wheelchair while exiting Fajr (dawn prayers) and the siege of Yasser Arafat at his Ramallah headquarters whom Ariel Sharon described as a “dog”, Bergman’s account rekindles what many in Israel would prefer to have faded from memory.

As lawfare represents a useful tool for Palestinians to obtain justice and given the number of cases against Israeli war crimes under consideration at the International Criminal Court (ICC) the litany of insider knowledge exposed in Rise and Kill First, makes Ronen Bergman an expert witness.

The test of his integrity will be whether if and when the ICC proceeds to charge Israel, Bergman agrees to be a witness for the prosecution.