Israel has not Earned an African Welcome 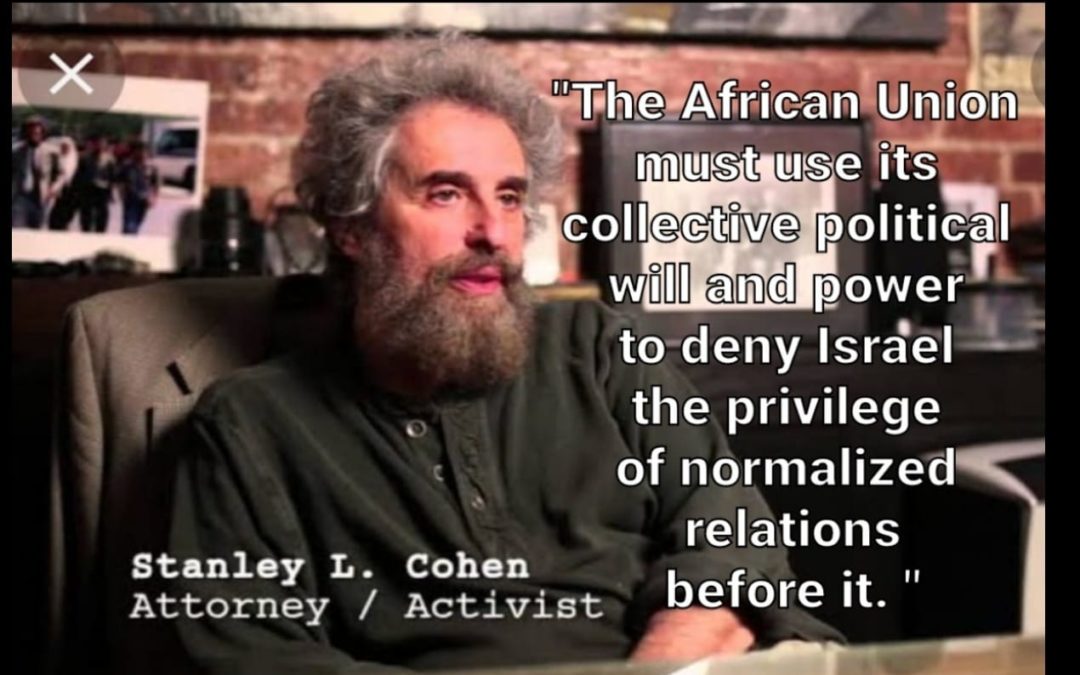 “I want people to remember me as someone whose life has been helpful to humanity.”

Though he tenaciously believed in African unity, the African liberation struggle and its social and economic freedom, with these words legendary Pan-Africanist, Thomas Sankara spoke of a world community, one that transcended the narrow confines of birth and gender, of class and color, of faith and futility. Sankara urged “nonconformity, the courage to turn your back on the old formulas, the courage to invent the future . . .  a new society,” one built of freedom and equality.  Were this iconic African leader alive today he surely would be stunned by the warm embrace by some in the African continent of a supremacist state that promotes all that Sankara soundly rejected and for which he gladly gave his life as sacrifice to principle and purpose.

Fashions come and go, cycling through the years—the cut of one’s suit narrows or widens; the hemline on a dress rises and falls, then rises again, to suit the changing tastes of the day. Yet every old fashion eventually comes around again. Just so, political accommodation with morally bankrupt regimes—like wide lapels or padded shoulders—never really goes away: rather, every few years we are treated to the same old rhetorical rags, pulled from the back of the closet, and paraded down the catwalk of international relations, generally for the benefit of unseen vested interests, all in the name of “pragmatism” and “reasonableness.”

Accommodation gets dressed up under many names, most of them harkening to a noble purpose: “engagement,” we are told, is constructive and seeks common ground; “compromise” allows that opposing interests can still find talking points, break bread together and sit at the same table, each party giving something to the other; “normalizing” relations simply admits the status quo and moves forward from the regrettable past. The basic idea is a simple one—by talking to the recalcitrant party, you may influence its behavior, and achieve the moral and political change you want, furthering justice from engagement.

Yet for the global movement in support of Palestine—and those who honor that movement—there can be no common ground with Israel: that nation’s existence is predicated on the suppression of Palestinian life, culture, rights, property, freedom and sovereignty, and always has been. As an attorney, I am currently involved in litigation before the African Commission on Human and People’s Rights in which we seek to revoke Israel’s observer status at the African Union on the grounds that it is an outlaw nation, one that has never accepted international law and has committed grave and on-going human rights abuses, including war crimes. Be it the occupation and illegal annexation of Palestinian lands, its “nation-state” laws which exalt Judaism over of all other faiths, or its apartheid system that denies millions of Palestinians their fundamental rights to equality, freedom and self-determination, Israel has forfeited any normalizing status among the world community.  I argue now and always that Israel is a white supremacist project—a nation founded by and for white Europeans, by colonizing, subjugating, jailing dispossessing and murdering people of color—and that Africans especially must stand fast, stalwart in blocking Israel’s international “rehabilitation,” so long as it keeps Palestine under its boot, bombing its inhabitants, stealing their land, and maintaining a single political entity in which two peoples are by law governed unequally.

Israel’s most fervent collective hope is to put the past so utterly behind it that all the nations of the world forget what it has done in the name of its own national aspirations, and welcomes Israel as a brother nation, a sister country, unto the fold of nations. It pursues this agenda—sending its ministers to African capitals, spending money on diplomatic endeavors, spreading cash around African governments—even as it continues to subjugate the Palestinian people taking their land parcel by parcel, building apartheid in name and deed, and jailing its activists by the thousands. Israel looks upon the African continent and sees economic opportunity —she would like to see an Israeli rifle in the hands of every African soldier, Israeli armored vehicles in every army from the Sahel to the east African shores; she would like to cash in on the extraction-industrial-complex, in the race to exploit Africa’s riches and natural resources; and most of all, Israel wants to present itself to the world as a legitimate and democratic partner . . .  and open for business.

Yet to engage the beast is to risk losing your human qualities, and thereby to accommodate bestial morality. We think of those statesmen who failed to understand this, and they don’t come out very well in the eyes of history: Montezuma the Aztec, making his fateful alliance with Cortes and the murderous Spaniards, only to lose his life and his people to colonial invasion; or the French revolutionaries of the Directoire who turned to Napoleon to restore order amid the chaos of 1799, and caved in to his demands for power, thus ending the Republican experiment; or Neville Chamberlain, returning in 1938 from meeting Herr Hitler, waving his paper agreement with the Nazi regime, and declaring that he had guaranteed “peace for our time.” These concessions of principle to political convenience echo down the ages as glaring symbols of the perils of compromise with those who do not bargain in good faith; rogue actors who see equality and justice as but impediments to their own master plan.

Now is not the time to make a devil’s bargain with an outlaw nation intent on increasing its power. “Normalizing” international relations with an apartheid regime like Israel is giving in to despotism—endorsing Israel’s brutal occupation, now essentially in its seventy-fourth year; validating its theft of land; approving its jailing and killing of tens of thousands of Palestinians since 1967; and shoring up its international reputation even as the world would forget about the Palestinians.

As African nations accede to Israel’s influence on the continent, we can predict what will happen: at the United Nations, Israel will count on “friendly” African states to remain silent, or vote against any General Assembly resolution which stands up for Palestinians. The next time violence flares up in Gaza—for surely there will be a next time —Israel will be even further emboldened to drop cluster bombs and incendiary munitions on apartment blocks, on schools and hospitals, secure in the knowledge that a dozen or more African states will stand by her in word, lending moral support to rank barbarism. When Israel sends warplanes against its neighbors in Syria or Lebanon or Iraq, friendly African states, perhaps on the receiving end of Israeli largesse, or Israeli military equipment, or Israeli billionaire gold- and diamond-mining deals will turn a blind eye to such aggression.

The Boycott, Divest and Sanction (BDS) movement explicitly seeks to isolate a regime which has never followed international law, and won’t be held to account for it in any venue. It is a strategy that works, as any South African can tell you. Palestinians—West Bank or Gaza residents alike—live as captives under a political system in which they have no representation, can be treated as inferior, second-class non-entities, and have only one option: leave Palestine and further Zionism’s original project of population transfer and dispossession or die. It is up to those of us, people of conscience, to keep Israel from the table of legitimacy so long as she keeps Palestinians from their own land, their own national aspirations, and their own destiny as a people. It is a non-violent, internationalist strategy to which all peoples of conscience can and must lend their support. While there are those who preach the gospel of “engagement” regarding Israel, saying this is how to influence Israel’s behavior, they make a serious error in not understanding the explicit chronicle of Zionism, which has never in its history compromised with the original agenda of removing the Palestinians from their land, and continues that calculated, violent project today. “Engagement” is a fashion we have seen before, many times—Israel is all too happy to don again the bright, reasonable clothing of dialogue and negotiation. All the while it continues to treat Palestinians under its power as serfs, economic slaves and inconvenient bodies in the way of “Greater Israel”—all the land, emptied of Palestinians, from the Jordan Valley to the sea.

The temptation by African accommodationists here is to view Israel’s participation in pan-African diplomatic circles as “symbolic,” and simply a matter of formal politesse. It signifies nothing ideological, apologists would have us believe, and simply concedes the real pragmatic interests—commercial, market-based reality. Yet behind every sign is substance: if Israel’s accession to full diplomatic status at the African Union is a symbol of “realpolitik,” and what the influence game can achieve, then it is the duty of every African to stand up and decry the facts behind this formal surface: Israeli diplomacy rests upon a damning, nationalist foundation of land theft, jail cells, colonialism and white supremacy. This is the diversion Israel plays, all the while constructing the walls, the roads, the laws and the prisons of its permanent apartheid system, a supremacist construct not at all unfamiliar to the continent and history of Africa.

Long ago Patrice Lumumba wrote “the day will come when history will speak . . . Africa will write its own history . . . it will be a history of glory and dignity.”  Such a manifest and compelling crossroad presents itself here and now. African states must not—cannot—reward Israel for its palpable disregard of humanity, and human rights and dignity. The African Union must use its collective political will and power to deny Israel the privilege of normalized relations before it.

Stanley L Cohen is a US-based attorney and human rights activist who has done extensive work in the Middle East and Africa. He has handled prominent international cases including that of Hamas leader  Mousa Abu Marzook. He has served as a consultant  to Middle East governments and movements  including Hamas and Hezbollah and NGOs and foundations in Palestine, Egypt, Syria, Lebanon, Saudi Arabia  and Turkey.