Former chief Justice (CJ) Mogoeng has been found guilty by the Judicial Conduct Appeals Committee of violating the country’s foreign policy and violating our stand on human rights. Whilst the media has focused on the phrases that the former Justice was asked to apologise for becoming in political controversy. They often ignore the fact that he violated our stand on human rights by siding with an oppressive and racist Israeli regime. The formal complaint against the CJ was brought by a number of organisations in particular SABDS Coalition, Women’s Cultural Group and Africa4Palestine.

We must recall the CJ got himself into hot water for his support for the Zionist state in a webinar hosted in 2020 by The Jerusalem Post. He said

‘I think so. Uh, let me begin by saying I acknowledge without any equivocation that the policy direction taken by my country, South Africa, is binding on me, it is binding on me as any other law would bind on me. So, whatever I have to say, should not be misunderstood as an attempt to say the policy direction taken by my country in terms of their constitutional responsibilities is not binding on me. But just as a citizen, any citizen is entitled to criticize the laws and the policies of South Africa or even suggest that changes are necessary, and that’s where I come from …”

Thereafter to add salt to injury he said he will not be moved even if the masses protest. Mogoeng relies on conservative Christian Zionist interpretations of the bible, which under-gird repression and violence against Palestinians and their continued colonisation. That is not the way of Mandela and those who fought against apartheid. The demand for an apology is a step in the right direction. It affirms our view that it is noble and just to support our government policy when it stands against human rights violations. This obligation falls on all citizens. 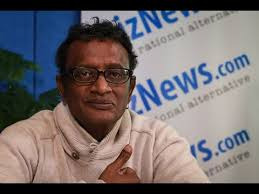 Author: Hassen LorgatHassen Lorgat, has worked in the trade unions, civic associations as well as NGOs for the past while. He is currently the manager of Policy and Advocacy for the Bench Marks Foundation, and here he writes in his personal capacity.