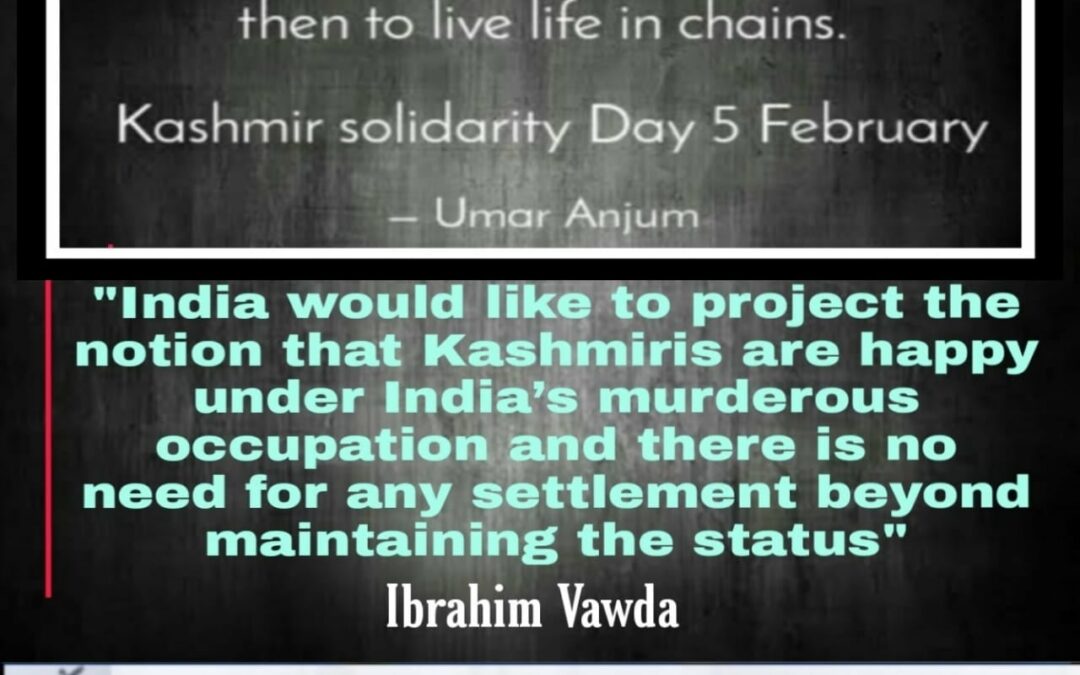 Is the question of Kashmir and its seven-decades long quest for self-determination of no consequence for the Cyril Ramaphosa administration?

The population of Kashmir under siege by a belligerent Indian army led by the Modi regime, would not be wrong to believe so, given the absence of political will by the South African government to intervene on their behalf.

Though in the Indo/Pak subcontinent the issue of Kashmir and its struggle to gain independence from an oppressive Indian Occupation is a matter of huge concern, it appears that in Africa and more particularly in South Africa, there exists a blind spot about it.

Of course there may be a number of factors that explain why Kashmir’s freedom struggle hasn’t gained any traction here, unlike Western Sahara or Palestine.

One of it perhaps is dearth of information while the other may be the lack of a sustained campaign around it, notwithstanding the fact that a Kashmir lobby group does exist. It has and continues to do yeoman work but regrettably the challenges facing Occupied Kashmir have yet to be placed on a national agenda.

Besides occasional media reports on some of the tragedies experienced on the ground resulting from terrorism inflicted by the  Indian army, the story of Kashmir has yet to be understood as a major human rights issue.

More glaring is the fact that the ANC-led government has thus far failed to profile Kashmir as a dominant case warranting the highest level of intervention in its foreign policy.

One may thus be justified in thinking aloud and wondering whether India’s overarching influence via trade, cultural, sporting and religious ties have impacted on South Africa’s inability to adopt a tough stance in defense of Kashmir?

Some within the unions and progressive forces including the liberation movements, both ANC and PAC, will argue and correctly so, that historically, India played a pivotal role in South Africa’s freedom struggle.

Having gained its independence from British colonialism in 1948, the same year South Africa saw the emergence of Apartheid, India’s Congress movement had no hesitation to continue and intensify unconditional support for the battle against racism and white supremacy.

It was an era marked in defiance of Western greed to sustain South African apartheid. India stood out heads and shoulders above many newly independent countries to support efforts waged by the liberation movements.

A glorious chapter of solidarity indeed, but overshadowed in recent years by the emergence of sectarian politics which has defined India’s current trajectory to what’s been described as the rise of Hindutva.

Distinct from Hinduism, the politics of Hindutva is an ideological manifestation of extremism, intolerance, hate and narrow nationalism. A far cry from the India of yesteryear.

Hindu scholars make it clear that the distinction between Hindutva and Hinduism is stark and point out that Hindutva can best be described as an aberration of the Hindu faith.

In contrast to the all-embracing, multi-faith and progressive Indian Congress movement of the past, Hindutva as applied today by the BJP-led Modi regime is a fascist doctrine not any different to European fascism.

A reality of India’s body politics today which can neither be denied nor ignored. Least of all by South Africa. Unless the Ramaphosa Presidency acknowledges the harsh reality of an overwhelming tilt to ethnic chauvinism which is at the core of Islamophobia across many regions in India, its foreign policy will remain hinged on an unrealistic fantasy.

The struggle to achieve Kashmir’s legitimate right to self-determination requires South Africa’s unconditional support. As many pundits have argued, durable peace in South Asia will only be realised once the wishes of the Kashmiri people to live freely is attained.

However the road to freedom is long and hard. It is compounded by a Hindutva dogma pursued relentlessly by Narendra Modi’s fascist government leading to changes in demographic structure of Occupied Kashmir.

While New Delhi pursues an agenda in violation of international law to render Kashmir’s Muslim majority a minority, it is unacceptable for both media and state agencies in South Africa to remain silent.

The challenge thus is to make a clarion call on India to immediately suspend its military occupation of Kashmir and adhere to its international human rights obligations.

These include granting Kashmiris their inalienable right to self-determination through a free and impartial plebiscite under the UN auspices.

Will the call be made is a question Kashmiris will be asking.