Why Hands off Hijab Protest? 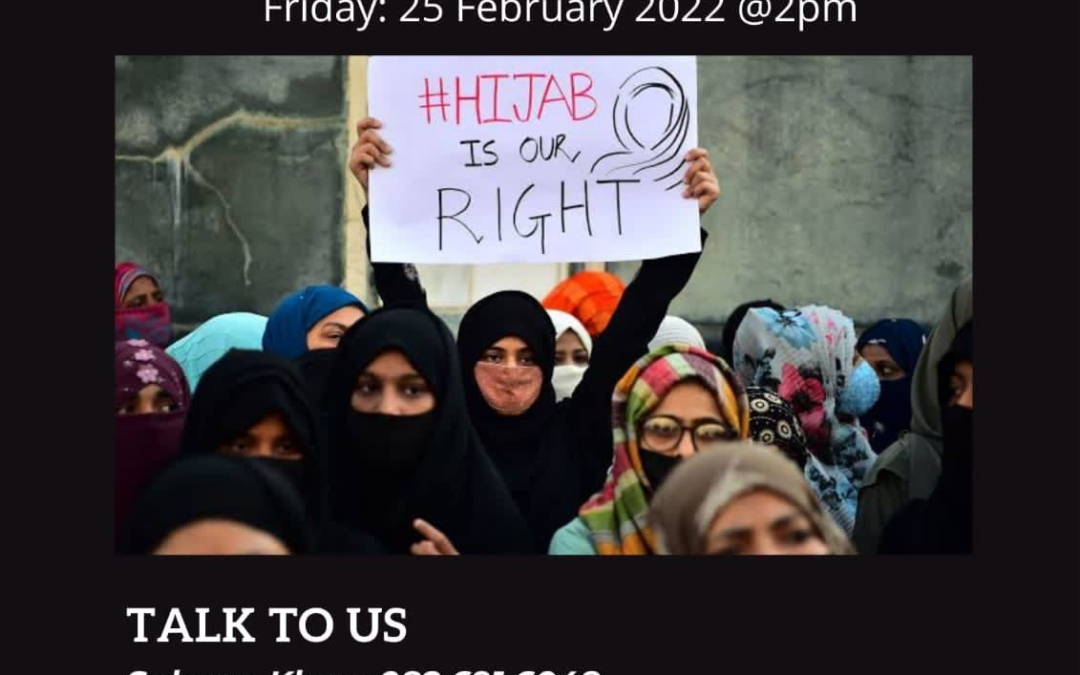 Hands off my Hijab-It is my Dignity and Right as a Muslim to wear Hijab as enshrined in the universal declaration of Human rights Article 18 “Everyone has the right to freedom of thought, conscience and religion”.

Refusing to let girls go to school in their hijabs is horrifying, in the state of Karnataka schools and various other states of India and the central government is numb about it.” the 24-year-old activist tweeted. “Objectification of women persists – for wearing less or more.”

In India, the stand-off has increased fear and anger among minority Muslims, who say the country’s constitution grants them the freedom to wear what they want.

Viral videos show a Muslim woman being heckled by a mob of young men shouting slogans, and heated arguments between students wearing hijabs and saffron shawls.

On Tuesday, Nobel Prize-winner Malala Yousafzai, who was 15 when she survived an attack by the Taliban in Pakistan for speaking up for the right of girls to be educated, weighed in. She called on India’s leaders to do something to “stop the marginalisation of Muslim women”.

An Indian state Karnataka has shut high schools and colleges for three days, after a row over Muslim women wearing headscarves in the classroom that has gained international attention.

The issue of Muslim women wearing hijabs had cropped up in a few other colleges in Karnataka earlier too, but it started gaining momentum when photos of the women protesters in Udupi went viral.

Hindu students in some other colleges began coming to classes wearing saffron shawls, which forced officials to insist that both could not be allowed on campus. In Mandya district, a video showed a young woman wearing a hijab being approached by a mob of men with saffron shawls. As they yelled “Jai Shri Ram” (Hai Lord Ram) repeatedly, she stood her ground, shouting “Allahu Akbar” (God is great).

This madness of marginalisation of minorities and lower caste has to rinse since PM Modi took charge of Prime Minister of India and he backed by his party and extremist Hindutva wing RSS. Once the Indian known for her secularism and polarity has slowly decayed into the hands of Hindutva fascism and had become Hindu right-wing fascism and extremist state.

In the current turns of event, it is crystal clear that fanatic Hinduism is on rising and there is no place and protection of minorities rights as it is prevailing into the recent banning of Hijab in Karnataka which will have a snowball effect across India in weeks to come, definitely the lustre of Indian pacifisms as taught by Gandhijee has lost and replaced by another extreme of fascism, alas the lost nostalgic history of Mahabharata.

The protest is being Organised by Congress of Ummah and other civil and unions to highlight the issue of Indian unfair dealing of minorities and especially the curtailing of Hijab donning into educational places. These acts of human, civil and religious rights abuse must not and should be gone unabated.

We are calling on all peace-loving South African citizens to join us in showing solidarity with the oppressed people of India and extend our hand to assist them in this trying time and become their voices in South Africa. If the Apartheid draconian racialist practices were not good for us then how and why we should allow taking roots in India or elsewhere.

Let’s join us in the peaceful protest and make our mark by coming in numbers to show solidarity with the sisters and mothers in India who have been constantly harassed and intimidated by Hindu fanatics. Let’s us send us strong message to the Indian representative in South Africa that what is happening to our family and friend in India is unacceptable and will not tolerate it at any cost, this our gentle message but if the act of barbarism continues then we will not shy away to Boycott India Morally, Politically and Economically.

An Injury to One, An injury to All,

Please join us for peaceful protest

Hands Off My Hijab Peaceful Protest

Bring your own poster and banners,

There will be a prominent array of speakers

Please not we are looking for volunteers, social media campaigners, twitterrazis, marshals