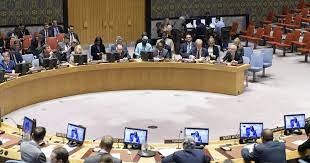 News that the UNSC has voted in favour of extending the arms embargo on the government of Somalia is indeed a pointer to the world as to who really owns these so called Islamist Jihadist movements across the world. Why would the UNSC vote for the extension of the embargo which denies the government of Somalia to buy weapons that would help it to degrade the capabilities of al-Shabaab?

The resolution, which also expresses concern at the continued presence of affiliates of the ISIL (ISIS) group in the Horn of Africa nation, was on Thursday approved by a vote of 11-0, with Russia, China, Gabon and Ghana abstaining in support of the call by the Somali government, backed by the African Union, to lift the arms embargo.

The British-drafted resolution does modify the arms embargo to reflect the government’s progress in improving its management of weapons and ammunition. This includes allowing Somalia to import portable surface-to-air missiles, higher-calibre mortars, anti-tank guided weapons, some aircraft and vessels designed or modified for military use, and combat drones for use by its security forces and police – unless the UNSC committee monitoring sanctions objects within five working days of receiving notification from the government.

Shouldn’t a legitimate government be assisted to fight and repel the terrorists on its soil? When arguments fly around that some powerful western government are in fact the real funders of these terrorist outfits that are terrorizing the world, it is dismissed as conspiracy theory. It appears like someone is trying to protect their child.

The big question that the world keeps on asking without getting answers is who is continually arming these outfits? The terrorists do have in their possession very sophisticated weaponry, where is it coming from? Who is funding ISIL, Al-Qaeda, Boko Haram, and al-Shabaab?

Somalia’s government under recently elected President Hassan Sheikh Mohamud has been engaged in a new offensive against al-Shabab, including efforts to shut down its financial network.

There is also the question of their appearance in the most resource blessed parts of our continent, why is it so? Africa should wake up from its slumber or else it will find itself soon overrun by these groups. Africa needs to strengthen its state security apparatus to always be on top of the situation lest they are replaced by these non-state actors.

The obvious strategy will be to break Africa up into economic zones controlled by these non-state actors for the exploitation of resources. Our continent could end up being just one big dump where anyone with weapons can curve out his area and exploit its minerals and become rich. It would end up becoming a gangster’s paradise.

This strategy seems to be a well-planned one and it’s moving with precision towards its realization. Region after region, is now coming under some terrorist influence