Afghanistan: the Smell of Defeat 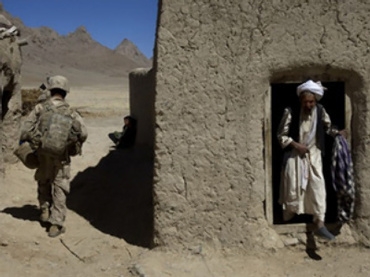 Afghanistan: the Smell of Defeat

“These two visions, one of tyranny and murder, the other of

liberty and life, clashed in Afghanistan. And thanks to brave US and

coalition forces and to Afghan patriots, the nightmare of the Taliban

is over and that nation is coming to life again.”

Not so fast, George.

Afghanistan. It hasn’t removed the warlords from power, curtailed

improved life for ordinary working people. The US hasn’t achieved any

of its strategic objectives. The Taliban are stronger than ever, the

central government is a corrupt farce, and, after 11 years of war, the

country is in a shambles.

This is what defeat looks like. The US military has been defeated by a

poorly-armed militia which has demonstrated a superior grasp of modern

warfare and asymmetric engagement. The Taliban has shown that they are

more adaptable, more motivated, and smarter. That’s why they

prevailed. That’s why they beat the world’s most celebrated army.

Americans don’t like to hear that kind of talk. They’re very proud of

to keep it outfitted in the most advanced weaponry on earth. But

weapons don’t win wars, neither does propaganda. If they did, the US

would have won long ago, but they don’t. What wins wars is tactics,

operations, and strategy, and that’s where the emphasis must be if one

expects to succeed.. Here’s an excerpt from an article by William S.

Lind explaining why the US mission in Afghanistan failed:

“A general rule of warfare is that a higher level trumps a lower,

and technique is the lowest level of all. Our SEALs, Rangers, Delta,

SF, and all the rest are vastly superior to the Taliban or al-Qaeda at

techniques. But those opponents have sometimes shown themselves able

at tactics, operations, and strategy. We can only defeat them by

making ourselves superior at those higher levels of war. There,

regrettably, Special Operations Forces have nothing to offer. They are

just another lead bullet in an obsolete Second Generation arsenal.”

The US military’s high-tech gadgetry and pilotless drones merely

hasn’t adapted to the new reality. Here’s more from Lind expanding on

operational level. NATO in Afghanistan, like the Soviets three decades

ago, has been unable to solve that riddle. But the Taliban appears to

The Soviet army focused its best talent on operational art. But in

Afghanistan, it failed, just as we have failed. Like the Soviets, we

can take and hold any piece of Afghan ground. And doing so brings us,

like the Soviets, not one step closer to strategic victory. The

Taliban, by contrast, have found an elegant way to connect strategy

and tactics in decentralized modern warfare.

What passes for NATO’s strategy is to train sufficient Afghan

forces to hold off the Taliban once we pull out. The Taliban’s

advisers. That is a fatal blow against our strategy because it makes

The Taliban know this technique is operational, not just tactical.

They can be expected to put all their effort into it. What counter do

we have? Just order our troops to pretend it is not happening—to keep

trusting their Afghan counterparts. That order, if enforced, will put

our soldiers in such an untenable position that morale will collapse.”

Lind does not underestimate the Taliban or dismiss them as “ignorant

goat herders”. In fact, he appears to admire the way they have

technology, communications and firepower. It helps to prove his basic

thesis that tactics, operations, and strategy are what matter most.

For more than a decade, the Taliban have been carrying out an

impressive guerrilla war frustrating attempts by the US to establish

security, hold ground or expand the power of the central (Karzai)

government. In the last year, however, the militia’s efforts have paid

American troops withdraw. The Taliban found the weak-link in the

Pentagon’s strategy and has used it to full advantage. “As American

it, ‘The training mission is the foundation of the current strategy.

Without that mission, the strategy collapses. The war is adrift, and

point.’” (“The Day we lost Afghanistan”, The National Interest)

TIME TO CUT AND RUN?

The persistent green on blue attacks have convinced US and NATO

has decided to throw in the towel. Here’s a clip from a speech Obama

gave in May at a NATO confab in Chicago:

where we say, this is all done, this is perfect, this is just the way

The political class is calling it quits. They’ve decided to cut their

losses and leave. Here’s how the New York Times summed it up:

“After more than a decade of having American blood spilled in

Afghanistan…it is time for United States forces to leave Afghanistan

….. It should not take more than a year. The United States will not

achieve even President Obama’s narrowing goals, and prolonging the war

will only do more harm….

Administration officials say they will not consider a secure

“logistical withdrawal,” but they offer no hope of achieving broad

governance and security goals. And the only final mission we know of,

to provide security for a 2014 Afghan election, seems dubious at best

…the idea of fully realizing broader democratic and security aims

simply grows more elusive….More fighting will not consolidate the

modest gains made by this war, and there seems little chance of

guaranteeing that the Taliban do not “come back in..

Post-American Afghanistan is likely to be more presentable than

North Korea, less presentable than Iraq and perhaps about the same as

Vietnam. But it fits the same pattern of damaging stalemate. We need

to exit as soon as we safely can.

America’s global interests suffer when it is mired in unwinnable

Notice how the Times fails to mention the War on Terror, al Qaida, or

Bin Laden, all of which were used to garner support for the war. What

matters now is “America’s global interests”. That’s quite a reversal,

long as it takes; to liberate Afghan women, to spread democracy to

far-flung Central Asia, and to crush the fanatical Taliban once and

for all? Was it all just empty posturing aimed at ginning up the war

“The Women of Afghanistan”:

“Afghanistan can be a hard and cruel land, especially for women

and girls. Many fear they will be even more vulnerable to harsh tribal

Womens’ rights have made modest but encouraging gains over the

past decade. But these could disappear without a strong commitment to

preserve and advance them from Afghan leaders, Washington and other

…all Afghans should be invested in empowering women. As Mrs.

Clinton has argued, there is plenty of evidence to show that no

marginalized and oppressed.” (“The Women of Afghanistan”, New York

Ahh, but lending a hand to “marginalized and oppressed” women doesn’t

really hold a candle to “America’s global interests”, now does it? As

one might expect, the Times most heartfelt feelings are shaped by

political expediency. In any event, the Times tacit admission proves

that the war was never really about liberating women or spreading

democracy or even killing bin Laden. It was about “America’s global

the Great Game, controlling real estate in thriving Eurasia, the

economic center of the next century. That’s why the US invaded

Afghanistan, the rest is propaganda.

noting. The editors tiptoe around the one word that most accurately

summarises the situation: Defeat. The United States is not leaving

of 2006, by underestimating the tenacity, the skill, the ferocity, the

adaptability, and the intelligence of their adversary. That’s why

applicable it may be. It’s because your average “Joe” understands

Defeat is a repudiation of leadership, proof that we are ruled by

fools and scoundrels. Defeat is also a powerful deterrent, the idea

festers in people’s minds and turns them against foreign

interventions, police actions and war. That’s why the Times won’t

utter the word, because defeat is the antidote for aggression, and the

Times doesn’t want that. None of the media do.

But the truth is, the United States was defeated in Afghanistan. If we

can grasp that fact, then maybe can stop the next war before it gets