Blame nato for the mess in Libya 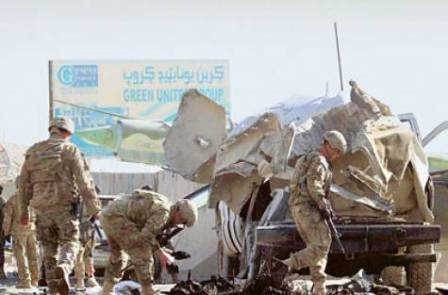 Unrepresentative NTC is unable to control militias, tribes and factions, which are committing human rights abuses in a bid to settle scores

A US soldier with the Nato-led International Security Assistance Force (ISAF) looks for evidences, as others walk at the scene of a suicide attack in Kandahar south of Kabul, Afghanistan. A suicide attacker blew himself up yesterday at an entrance to a sprawling base for US and Nato operations, killing seven civilians, police said.

The British Foreign Office and the US State Department are seriously concerned. Human rights officers in the United Nations are angry. Canada, for some reason, seems particularly enraged. The target of all this fury is Libya’s National Transitional Council (NTC), which is berated for failing to curtail widespread human rights violations throughout the country.

The story sounds somewhat typical. Rights watchdog groups sound the alarm regarding violations in some third world country. Western powers respond by demanding accountability. The media reports on the story until it eventually fades away.

However, this story requires more than a mere acknowledgement of the self-serving approach to human rights violations. The accusers include the UN and leading members of the North Atlantic Treaty Organisation (Nato). It was the selective wording and interpretation of UN Security Council Resolution 1973 that led to a devastating war against Libya. The war destroyed one brutal regime and replaced it with another — at the expense of tens of thousands of Libyan lives.

As for the accused, it is no other than the NTC, which itself was a Nato political construct aimed at leading the political transition in Libya to serve western interests.

The whole Libyan affair was choreographed in a way that actually resembles the management of Iraq following the March 2003 invasion. Western powers purported to serve as the enforcers of international law, with the altruistic aim of ridding the world of vile dictators who ‘kill their own people’. But the situation in Libya is apparently less manageable than anticipated.

It turned out that ‘mission accomplished’ in Libya was yet another hoax. The result is no less devastating than what transpired in Iraq.

The current situation in Libya is promising a multi-layered conflict involving numerous militias, tribes and factions, all organised around ideological, familial and political objectives that are unique to Libya itself.

The war on Libya has empowered some parties and given them the chance to settle scores. This is highlighted in the current violence in Bani Walid, which saw widespread killings and tortures of those accused of being loyalists of Muammar Gaddafi.

All it takes for one militia to justify its onslaught against any town in Libya is to declare that it hosts Gaddafi loyalists. This was the case in Bani Walid, one of the last cities to surrender. The denunciation is enough to render every act of aggression and torture somehow acceptable by Arab and western media alike. The NTC is merely choosing sides to ensure that emerging powerful militias remain loyal to it, even if only verbally.

All of this goes against Nato’s initial calculations. Nato had hoped that a strong NTC, backed by well-controlled militias, would eventually merge to become the country’s next government and national army. This didn’t happen. The NTC was organised haphazardly without a real popular mandate, while the militias are still in their trenches to ensure that future Libya will not be dismissive of their tribes, cities and factional interests. It is a recipe for a civil war.

The situation worsened as rights groups issued stinging criticism of the dire situation in Libyan prisons. Amnesty International spoke of inmates dying under torture. In Davos, The UN High Commissioner for Human Rights, Navi Pillay, told Associated Press that various militias hold up to 8,000 prisoners in 60 detention centres around the country. In these centres, “there’s torture, extrajudicial executions, rape of both men and women”.

The Nato allies are concerned, of course. If the Libyan model — regime change from the air — completely fails, their military adventurism in the Middle East will suffer yet another setback. More, the unfolding of the Libyan travesty will continue to reawaken allegations of serious war crimes committed by Nato itself, who supposedly unleashed the war on Libya “to protect civilians and civilian populated areas under threat of attack”.

The Nato war on Libya was commanded by a Canadian, Lt Gen Charles Bouchard. Last June, Canadian Foreign Affairs Minister John Baird was quoted as saying that Libya should not be expected to go from “Gaddafi to Thomas Jefferson”. He failed to elaborate on what kind of democracy Nato intended to achieve with its 9,600-strikes mission.

To berate Libyans for failing to adhere to human rights is brazen hypocrisy, especially as many of Nato victims are still not fully counted for. The behaviour of militias, and the unrepresentative NTC are simply a continuation of the very violent legacy set forth by the very Nato countries that are demanding accountability, democracy and the rule of law.

Ramzy Baroud is an internationally-syndicated columnist and the
editor of PalestineChronicle.com. His latest book is My Father Was a
Freedom Fighter: Gaza’s Untold Story.