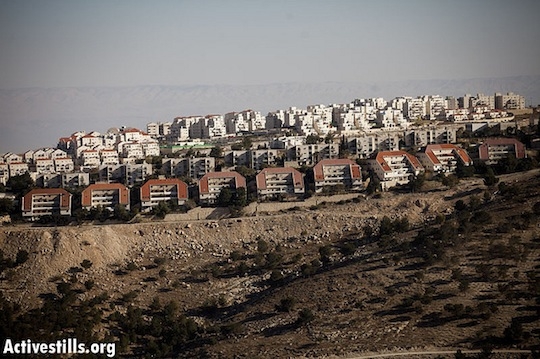 European diplomatic heads of mission in Jerusalem submit report to Brussels calling on the EU and its member states to take economic measures to stop Israel’s settlement enterprise, and to prevent European companies from supporting the settlements.

European diplomats in the Palestinian Authority called on Brussels and their respective European states to take concrete measures to stop Israel’s “systematic, deliberate and provocative” settlement enterprise, including preventing economic and financial support for settlements – actions that could described as sanctions.

The report, obtained by +972, describes Israeli settlements as “the biggest single threat to the two-state solution,” and recommends specific measures that Brussels could or should take in order to mitigate that threat.

Two of the recommendations most likely to irk Israel, directly relate to the economic activities of European companies that profit from settlements.

In addition to the standard practice of excluding settlement products from the free trade agreement between the EU and Israel, the report recommends “guarantee[ing] the consumers’ right to an informed choice,” asking the European Commission to provide guidelines on labeling of settlement products.

More significantly is the recommendation that EU governments “[p]revent, discourage and raise awareness about problematic implications of financial transactions, including foreign direct investment, from within the EU in support of settlement activities, infrastructure and services”

It is followed by a recommendation that the EU inform businesses of the “financial and legal risks involved in purchasing property or providing services in settlements.”

The implication of this recommendation is that any EU-based company that invests in and provides services for settlements could be held legally (and financially) liable for supporting the illegal enterprise. While European companies like Veolia have long been targeted by activists for owning and operating land fills, waste-water treatment facilities and buses that serve Israeli settlements in the West Bank, implementing this recommendation would constitute a direct and official warning to similar companies by the EU itself.

It also places particular emphasis on East Jerusalem and Israel’s settlement activities there, ranging from construction that aims to completely isolate East Jerusalem from the rest of the West Bank, to the use of archeological activities for furthering Israel’s political and ideological goals.

The diplomats also recommend creating voluntary guidelines for European tour operators in order to ensure they do not intentionally or inadvertently support Israeli settlement activities in East Jerusalem, such as the City of David archeological park run by settler organization El-Ad.

The non-binding report is not the first of its kind; a similar report last year carried many of the same recommendations, although they were fewer and not as harsh.

Although the document reflects common thinking among European diplomats, lack of action by the politicians they work for is indicative of the political difficulties in applying serious pressure to further the EU’s foreign policy aims: ending Israeli settlement construction and achieving a two-state solution.

The likelihood of Europe applying serious pressure against Israel based on this report alone, without the support of elected politicians, is close to non-existent. However, the mere existence of such scathing documents coming out of capitals that are traditionally supportive of Israel is in itself significant.

By Michael Omer-Man (Retrieved from +972)