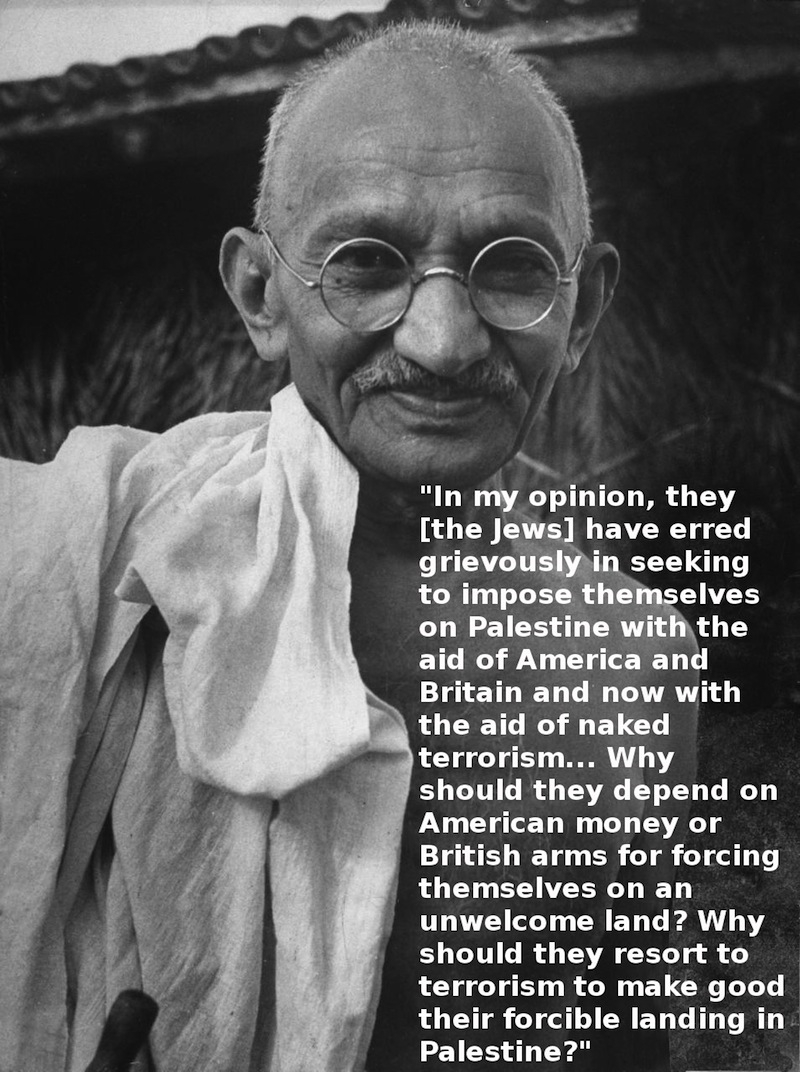 In 1948, 800 000 Palestinians were displaced by Zionist militia groups, Hagana and its splinter groups, the Irgun and the Stern Gang. These groups were organised into underground terrorists who were responsible for the acts of violence against the Palestinians between 1943 and 1948. 50 000 Bedouins have had their traditions and lifestyles destroyed by Israeli Colonisation.

These acts of violence continue to this day with the support of the US, NATO, the EU and some Arab states.

Capitalism, Socialism, Nazism, Communism and Zionism have one thing in common: they are all man-made –isms and are driven by politics, greed and violence. Christianity, Islam and Judaism are GOD-given decrees which serve to benefit mankind and delivered by personalities revered by all three Faiths.

Recent reports indicating that Mahatma Mohandas Karamchand Gandhi, the great Indian philosopher, philanthropist, humanitarian, politician and founder of the Satyagraha (non-violent) philosophy was a close friend of Herman Kallenbach, the South African Jew and member of the South African Zionist Federation, may be true. However, it only tells half the story.

In 1937, Kallenbach was asked to visit the Mahatma to enlist his support for Zionism. In 1998, Prof. A. K. Ramakrishnan, a Senior lecturer at the Mahatma Gandhi University in the state of Kerala in India, presented a paper at a seminar organised by the Institute of Islamic and Arab Studies. The aim of the seminar was to highlight the traditional Indian support for the Palestinian struggle against the Zionist occupation of historic Palestine.

In his paper, Prof. Ramakrishnan quotes Gandhi at length. Gandhi expressed his sympathies with the Jewish people for the persecution they suffered.

“ But, my sympathy does not blind me to the requirements of justice. The cry for the national home for the Jews does not make much appeal to me. The sanction for it is sought in the Bible and in the tenacity with which the Jews have hankered after their return to Palestine. Why should they not, like other peoples of the earth, make that country their home where they are born and where they earn their livelihood?”

In his presentation, the Professor categorically stated that Gandhi questioned the “foundational logic of political Zionism” and that he, Gandhi, rejected the “idea of a Jewish State in the Promised Land”. The founder of the Satyagraha movement was very clear when he stated that “the Palestine of Biblical conception is not a geographical tract”.

Although he came under immense pressure from the Zionist leaders, the founder of the non-violent national struggle for India’s Independence was not prepared to compromise his position. He protested against the reign of terror perpetrated by the Zionists in Palestine as well as the partition plan for Palestine. He supported the course of Arab nationalism and emphatically rejected Zionism.

I am certain that the organisers of the Gandhi Walk have included all South Africans, irrespective of their religious or political affiliations, to participate in the event. For the South African Jewish Board of Deputies (SAJBD) to link Gandhi’s friendship with Kallenbach to the Walk, is being disingenuous and very economical with the truth. Notwithstanding Gandhi’s relationship with Kallenbach, Gandhi remained committed to defending Palestine from Zionist Colonialism. This kind of political opportunism will not succeed. If anything, Gandhi’s desire for a free Palestine, in which its entire people, Christians, Jews and Muslims, will be able to live, side by side and in peace, should reverberate from this Gandhi Walk.