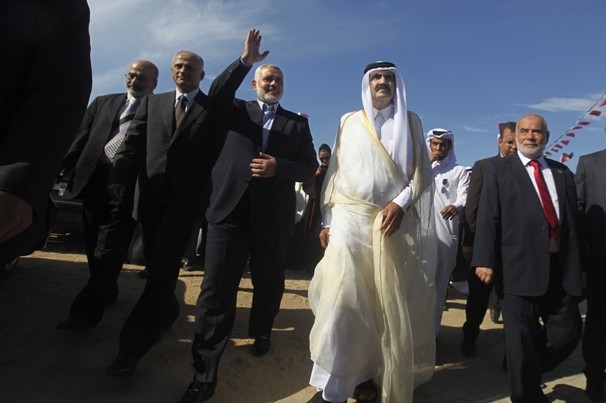 JERUSALEM — When the emir of Qatar paid the first visit by a head of state to the Hamas-ruled Gaza Strip last week, there were two different reactions from the Israeli Foreign Ministry.

In one statement, Yigal Palmor, a spokesman for the ministry, accused the emir, Sheik Hamad Bin Khalifa al-Thani, of backing a terrorist organization and having “thrown peace under the bus.”

But an Arabic-language spokesman for the ministry, Lior Ben Dor, told Radio Sawa, a U.S.- funded station heard across the Middle East, that Israel welcomed the visit of the emir, who pledged generous financial aid.

“Since our withdrawal from Gaza, the goal has been that Arab states come and help the residents of Gaza,” Ben Dor said, referring to the Israeli pullout in 2005.

The double message was a symptom of the unraveling of an Israeli policy toward Gaza that was put in place after Hamas, which is considered a terrorist organization by Israel and the United States, seized control of the territory in June 2007.

The Israeli government adopted measures to isolate Gaza, sharply restricting supply shipments at border points, tightening bans on movement out of the territory, and promoting an international diplomatic boycott of the Hamas government.

The policy, strongly backed by Washington, was coupled with moves to promote economic development and foreign aid in the West Bank, where the Fatah movement of Palestinian Authority President Mahmoud Abbas is dominant. The intention was to squeeze Hamas by blockading and imposing austerity on Gaza, while boosting Abbas and Fatah through improved living conditions in the West Bank.

But the policy essentially backfired. Hamas rallied popular support in Gaza through a shared sense of siege, and it consolidated economic control by taxing goods smuggled through tunnels from Egypt.

A deadly Israeli commando raid in 2010 on a Turkish ship carrying activists challenging Israel’s naval blockade of Gaza led to an international outcry and a substantial loosening of Israeli restrictions on shipment of goods to the territory.

The rise to power of Islamist movements in Egypt and other countries swept by the Arab Spring provided Hamas with a diplomatic opening. The Hamas prime minister, Ismail Haniyeh, has made two regional tours this year, visiting Egypt, Tunisia, Turkey, Bahrain, Qatar, Kuwait and Iran. Egypt has eased restrictions on its border with the Gaza Strip, allowing greater freedom of travel for Palestinians.

The Qatari emir’s visit to Gaza, where he was received with an honor guard and the playing of national anthems — as if the Hamas enclave were an independent state — was touted by Haniyeh as the formal end of “the political and economic siege.”

The emir’s pledge of $400 million for projects including housing construction and road improvements — well exceeding the amount of foreign aid Gaza receives annually — contrasted sharply with the financial woes of the Palestinian Authority in the West Bank, where a falloff in aid has left Abbas and his allies struggling to pay salaries of thousands of employees.