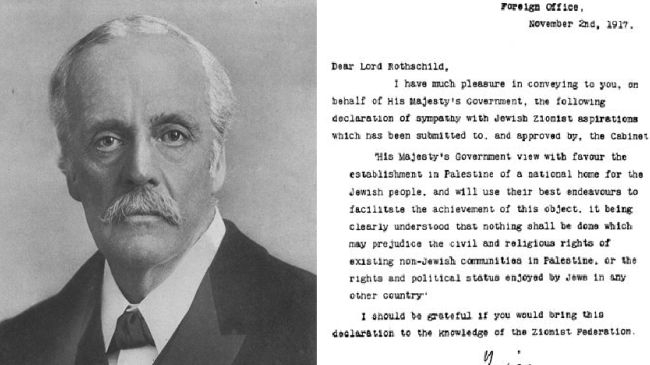 A decision by the British National Library to loan the original Balfour Declaration to the Israeli regime to be shown in a Tel Aviv museum, has triggered some anger among Arabs, media reports said.

The original copy of the Balfour Declaration has never left British soil for the last 96 years. The declaration, dated 2 November 1917, was a letter from the United Kingdom’s foreign secretary, Arthur James Balfour, to Baron Rothschild (Walter Rothschild, 2nd Baron Rothschild), a leader of the British Jewish community, promising the establishment of a Jewish homeland in Palestine.

It led to the day of creation of Israeli regime inside the Palestinian lands, which is known to the Palestinians as “Nakba Day”, a day when occupation was launched.

The Arab League, in a statement, condemned the decision to give Israel permission to exhibit the original copy of the Balfour Declaration in Tel Aviv.

The statement read that the Balfour Declaration set the basis for “a long-term conflict, claimed a lot of lives, and dispossessed the Palestinian people of alienable rights – a people who were brought up on this land from the dawn of history” and established a civilisation on its soil and lived for decades in love and tolerance. Palestinians had control of 98 percent of the territories when the Balfour Declaration was issued.

“The declaration was opposed at the time by many Jewish figures, including Lord Montagu, the only Jewish member of the Cabinet. Montagu warned of the consequences of the declaration, which was followed by colonial policies and occupation that deprived the Palestinian people of their territories,” the Arab League said in the statement posted on its official website.

The Arab League statement noted that since the day the declaration was issued, Palestinian people were deprived of their right to self-determination and are still paying a heavy price in terms of lost land, people and resources. Israeli regime continues to deny the right of the Palestinian people to establish an independent state with al-Quds as its capital on the borders of 4 June 1967, a right unanimously acknowledged by resolutions with the force of international law and the Arab Peace Initiative, which Israel has so far rejected.

“The regime of Israel is also obliged to respect all UN resolutions regarding Palestine, especially UN General Assembly Resolution 194 that called for the return of Palestinian refugees”.

Read here a transcript of the controversial Balfour Declaration:

I have much pleasure in conveying to you, on behalf of His Majesty’s Government, the following declaration of sympathy with Jewish Zionist aspirations which has been submitted to, and approved by, the Cabinet.

“His Majesty’s Government view with favour the establishment in Palestine of a national home for the Jewish people, and will use their best endeavours to facilitate the achievement of this object, it being clearly understood that nothing shall be done which may prejudice the civil and religious rights of existing non-Jewish communities in Palestine, or the rights and political status enjoyed by Jews in any other country.”

I should be grateful if you would bring this declaration to the knowledge of the Zionist Federation.