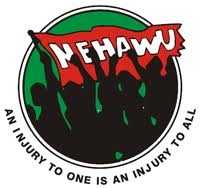 NEHAWU is alarmed and outraged to see that the Zionist lobby has brought its oppressive and bigoted methods to South Africa.

This follows the barbaric and savage attacks on pro-Palestinian civil society protesters by the thuggish Jewish Community Security Organization (CSO), working together with the South African Zionist Federation (SAZF) and South African Jewish Board of Deputies (SAJBD.The 250 civil society protesters were picketing peacefully at a concert in Gold Reef City, Johannesburg.

The protesters were denouncing this concert and raising the plight of the oppressed people of Palestine who are brutalized, slaughtered and incarcerated in Israeli jails. We condemn this cowardly act of assaulting peaceful protestors most of them women. This is an expression of the aggression Palestinians have to face from various rightwing Zionist groups in Israeli settlements and bantustans. Our union is not surprised though by this action since the Zionist lobby is feeling the heat of international isolation.

We salute the protestors who participated in this protest and we wish those injured a speedy recovery. We are also fully behind the decision to lay criminal charges against the CSO and the concert organizers, including Mr. Zev Krengel, the President of the SAJBD.This gangster behaviour of sowing anarchy cannot be tolerated by civilised people of this country who fought and defeated apartheid.

The struggle for the people of Palestine continues and NEHAWU will intensify its mobilisation against their oppression. We will continue to mobilize for the universal support of the Boycott, Disinvestment and Sanctions (BDS) campaign. We will continue to raise the demand in trade union and governmental forums for the support of the people of Palestine and the isolation of apartheid Israeli.

After witnessing the violence of the Zionist lobby, we are more determined to help the Palestinians who face this colonial brutality every day. We will not be cowed into submission and will confront the Jewish lobby’s aggressive methods of intimidation and violence head on.