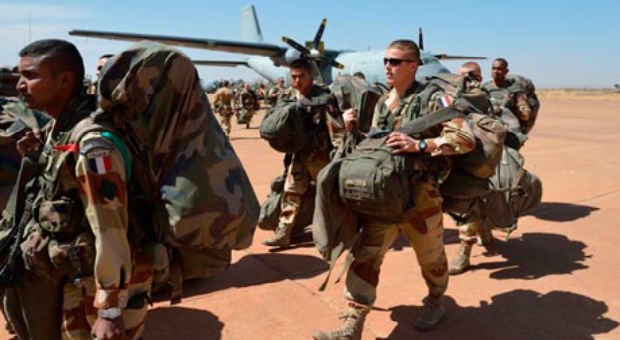 The speed and extent with which French warplanes have been deployed over the weekend in the West African country, Mali, point to a well-honed plan for intervention by the former colonial power.

Indeed, such is the careful choreography of this salient military development that one could say that the French have finally given themselves a green light to execute a plan they had been pushing over several months. That plan is nothing less than the neocolonial re-conquest of its former colony in the strategically important West African region.

Within hours of the Malian government requesting military support to counter an advance by rebels from the northern territory, French warplanes began carrying out air strikes on Friday. The attack sorties have reportedly been conducted for at least three consecutive days. Media reports said that French Mirage and Rafale fighter jets had struck across a wide belt of the remote Sahelian country, from Gao and Kidal in the northeast, near the border with Algeria, to the western town of Lere, close to Mauritania.

The warplanes were dispatched from France and also reportedly from Chad. The French government claimed that it had been granted over-flight permission by Algeria. Both North African neighboring countries are also former French colonies.

The air strikes by the French jets on at least six widely dispersed target areas within Mali cover an operational distance of nearly 2,000 kilometers, from east to west. This level of co-ordination indicates several weeks of planning and belies the appearance that the French government was responding in an impromptu fashion to a sudden call for assistance from the Paris-aligned Malian authorities.

In addition, over the weekend some 500 French troops arrived in the southern Malian capital of Bamako and the strategic town of Mopti, which is situated near the rebel-held northern territory.

The dramatic French intervention has all the hallmarks of a meticulous plan that was on a hair-trigger for action. The taking over by rebels last Thursday of the town of Konna, 45 kilometers from Mopti, near the de facto north-south frontier, and the subsequent alarm call from the Malian government in Bamako can therefore be seen as merely a green light for the detailed French plan to swing into action.

Furthermore, the French government has received swift support from other European countries and the United States. Britain has sent RAF CI7 cargo planes from a base in East England to Paris in order to help with French supply of troops, helicopters, trucks other heavy equipment. Washington has said it will provide logistics and communications. Both American and French surveillance drones have been operational in Mali and adjacent countries for months now.

France’s Foreign Minister Laurent Fabius was quick to hail the weekend air strikes a success in halting Malian “terrorists.” Fabius said the French military involvement would be for a “matter of weeks.” However, the extensive mobilization of troops and warplanes and the geopolitical backdrop to the development suggest otherwise. Perhaps mindful of this, Fabius was keen to emphasize that the Mali intervention would not turn out to be “another Afghanistan.”

Officially, Paris, London and Washington have up to now been pushing for an African-led intervention force to take the military lead in assisting the Malian government to quash a separatist rebellion in the northern half of the country. The northern region was taken over last April by Tuareg rebels in league with Islamist militia belonging to Ansar Dine and the Movement for Unity and Jihad in West Africa. The rebels have managed to consolidate their control over the vast and largely desert region around the main city of Timbuktu. Northern Mali covers an area the size of France and is sparsely populated with less than two million people.

West African states, including Nigeria, Senegal, Burkina Faso, Benin and Niger, are charged with assembling an intervention force at the behest of the Western powers. Last month, the United Nations Security Council gave final approval for the West African military mission to shore up the shaky government that is based in Bamako in the far south of the country, thousands of kilometers from the upper northern region.

Following the Security Council vote, diplomats at the UN and in West African capitals were talking about the combined African mission of some 3,500 troops being deployed much later this year, in September at the earliest. This was a view held by Romano Prodi, the UN’s top envoy to Mali, which was reported only days before the French military intervention.

The abrupt side-stepping of the African forces points up the real agenda of the Western powers and France in particular. What we are seeing now, with the rapid, large-scale French deployment, is the true neocolonial nature of this agenda. All the previous talk by Paris, London and Washington on the importance of intervention having “an African face” can be seen as cynical cover for direct Western action.

Only three months ago, President Francois Hollande vowed to French media that there would be “no French boots on the ground” in Mali. Evidently, official calculations have changed.

France and its Western allies have been assiduously taking up the international security threat allegedly posed by the rebels in Mali. Much is being made of alleged links between the Islamist militants and Al Qaeda in the Maghreb. President Hollande has repeatedly warned that French and European security is at risk if the rebels in Mali strengthen their control.

A spokesman for British Prime Minister David Cameron said at the weekend: “Both leaders [Cameron and Hollande] agreed that the situation in Mali poses a real threat to international security given the terrorist activity there.”

American politicians, military chiefs and media have also been waxing lyrical for months on how Mali represents the globe’s new “terror central” and that Western governments must act decisively to defeat the danger.

However, the precise nature of this “Islamist threat” from Mali is never spelled out or evidenced. We are expected to accept the word of Paris, London and Washington – the rogue states that have and are conducting illegal wars in Afghanistan, Iraq, Libya and Syria.

What we do know, however, is that the half century post-colonial borders of Mali are an alien imposition on nomadic peoples in the northern region – cultures that date backed thousands of years. Their rebellion against a remote and up to now indifferent colonialist-appointed administration in Bamako is probably a just cause. The French and its Western allies are therefore maligning an internal dispute within Mali with another specious “war on terror” narrative and in that way these powers are giving themselves a mandate to meddle in that country.

France being the former colonial master and with decades of covert military assets in the region is the “natural” choice among the Western powers to lead a neo-imperialist adventure in this strategically important region.

Mali has abundant riches in natural resources of metals and minerals. It is a major source of gold and uranium, as well as iron, copper, tin and manganese, and also versatile minerals such as phosphates, salt and limestone.

Moreover, the West Africa region has awesome potential for agriculture and oil. The Gulf of Guinea off Ghana and Nigeria is earmarked to become a leading oil and gas supply region to world markets in the coming years.

Military intervention by France and the other Western powers in Mali – under the guise of “defeating terrorism” – is a bridgehead for Western capital and corporations, not only into a resource-rich country, but into a large chunk of the entire African continent. In 2011, NATO’s bombardment of Libya and French subversion of elections in Cote D’Ivoire marked a new beginning of Western neo-imperialism in Africa. Mali is proving to be continuation of that dynamic and to be another staging post in this modern Scramble for Africa by Western powers.

Finian Cunningham, originally from Belfast, Ireland, was born in 1963. He is a prominent expert in international affairs. The author and media commentator was expelled from Bahrain in June 2011 for his critical journalism in which he highlighted human rights violations by the Western-backed regime. He is a Master’s graduate in Agricultural Chemistry and worked as a scientific editor for the Royal Society of Chemistry, Cambridge, England, before pursuing a career in journalism.

This article was originally posted at Press TV