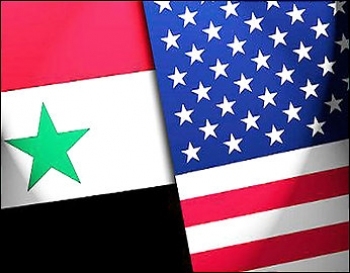 Meeting in Rome with the so-called Friends of Syria—fellow NATO powers and the reactionary Sunni monarchies of the Gulf states—Washington’s new secretary of state, John Kerry, announced on Monday that for the first time the US will begin funneling “non-lethal” aid directly to the armed militias seeking the overthrow of the regime of President Bashar al-Assad.

On its face, the new aid fell short of impressive. US officials spoke of providing the so-called Free Syrian Army with medical supplies and the US military’s Meals Ready to Eat (MREs) field rations. In addition, Washington has announced it is providing an additional $60 million in “humanitarian aid” to areas held by the Western-backed rebels.

Kerry indicated, however, that these public acts to assist the anti-regime militias were merely the tip of the iceberg. “We’re doing this, but other countries are doing other things,” Kerry explained.

While not going into detail, the meaning was clear to anyone following the civil war in Syria. In recent months, more advanced weaponry has poured across the country’s borders, paid for by Washington’s key Arab allies, the monarchical dictatorships in Saudi Arabia, Qatar and the United Arab Emirates and covertly organized by the CIA.

Meanwhile, the European powers are discussing proposals to stretch the definition of “non-lethal” assistance to include military equipment ranging from body armor and night-vision goggles to armored vehicles, all of which will be used to sharply escalate the lethality of the Syrian conflict.

A statement issued at the close of the meeting in Rome described the Syrian National Coalition—a formation cobbled together by the US State Department at a luxury hotel in Doha last November—as “the sole legitimate representative of the Syrian people.” Kerry appeared at a joint press conference with Mouaz al-Khatib, the Sunni preacher and ally of the Muslim Brotherhood, whom Washington is grooming to become the Syrian equivalent of Iraq’s Ahmed Chalabi or Afghanistan’s Hamid Karzai.

The US-sponsored coalition was supposed to convene a meeting Saturday in Istanbul to announce the formation of a “transitional government.” It was reported on Thursday, however, that the meeting had been postponed, likely due to another falling-out over the division of posts and spoils.

Taken together, these steps point to the elaboration of a strategy for ever-more direct US military intervention in Syria.

Demands for such action are becoming increasingly shrill in the media and sections of the ruling establishment. The Washington Post, for example, published an editorial Thursday demanding that Washington “move decisively to break Syria’s bloody stalemate” or risk losing “what may be a last chance to partner with the more moderate forces challenging Mr. Assad and to steer the country toward a new regime that the West could support.”

It calls on the Obama administration to engineer the formation of a “full-fledged alternative government on Syrian territory…recognizing it as the legal government of Syria. That would legitimize the supply of arms and allow the U.S. military to protect the Syrian population with airstrikes or Patriot anti-missile batteries, if that were necessary…”

Increasingly, the argument is being advanced within ruling circles that the US must intervene aggressively because of the danger that Al Qaeda-linked forces will dominate the anti-Assad forces and pose a threat to US interests if the regime collapses.

This amounts to US imperialism pointing to its own crime to justify an even greater atrocity. By all accounts, the Al Qaeda-linked elements of Jabhat al-Nusra and foreign fighters are playing the decisive role in prosecuting Syria’s civil war.

As the Wall Street Journal reported Thursday, the al-Nusra front “is now seen as the most powerful force in … rebel areas along the Turkish and Iraq borders.” The Journal went on to quote Aaron Zelin of the Washington Institute for Near East Policy as declaring, “The Syrian conflict is gong to be as big, if not bigger, than Afghanistan was in the 1980s in terms of mobilizing jihadi fighters.”

Of course the mobilization in Afghanistan was carried out under the auspices of the CIA, then in alliance with Osama bin Laden and the organization that became Al Qaeda. While publicly claiming to be involved in a never-ending global war against Al Qaeda, once again, in Syria, Washington has utilized these reactionary Islamist forces for the purpose of overthrowing a secular regime seen as an obstacle to US hegemony in the Middle East.

The results of this policy have been catastrophic. Syria, following in the wake of Afghanistan, Iraq and Libya, has seen its entire society torn to pieces as a result of a US-backed war for regime change, with tens of thousands killed and wounded, the country’s economy devastated and its population confronting a humanitarian crisis of tragic proportions.

A recent report prepared by the Syrian Center for Policy Research (SCPR) estimated that the losses to the country’s economy over the last 22 months amounted to $48.4 billion—the equivalent of 81.7 percent of the country’s GDP for 2010. It estimated that GDP had declined by 18.8 percent in 2012, this on top of a decline of 35 percent since the fighting —together with punishing Western sanctions—began. According to the report, losses to the country’s capital stock amount to $42 billion, with the outright physical destruction of plants, equipment and buildings accounting for $20.8 billion.

The US-backed “rebels” have systematically looted the economy in areas of the industrial capital of Aleppo that have fallen under their control, stripping factories of their goods and machinery and smuggling them across the border to Turkey.

The war has sent nearly one million refugees fleeing across Syria’s border to escape the fighting. Another estimated two million are internally displaced within Syria. According to the United Nations, three quarters of the refugees are women and children.

The US-backed war is destabilizing the entire region as Washington attempts to utilize regime change in Syria as a means of redrawing the map of the Middle East to suit its own interests and to prepare for a far more dangerous war against Iran.

If the Obama administration now feels it can move ahead toward more direct military intervention, it is in large measure thanks to an official “antiwar” movement that has been thoroughly integrated into the Democratic Party. Pseudo-left organizations have functioned as adjuncts of the CIA in promoting “humanitarian” intervention and portraying a bloody sectarian conflict as a “social revolution.”

Nonetheless, the policy of military aggression abroad, like that of austerity at home, is deeply unpopular among working people, the vast majority of the population. Preventing another catastrophic eruption of American militarism depends upon the political mobilization of the working class against the root cause of war, the capitalist system.