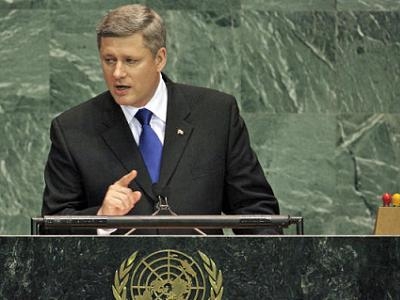 By Jim Miles (Retrieved from The Palestinian Chronicle)

Once again Canada has assumed its sycophantic role of supporting the U.S. and Israel in their determination to ethnically cleanse the Palestinian territories.

The reality of the vote for Palestinian participation in the UN is more realistically 138 yes to 2 no: the Pacific Island countries and Panama are essentially colonial protectorates of the U.S. even though they are “independent”: Canada is a well-known supporter of the U.S. acting as an independent 51st state of the union; that leaves the Czech Republic as the only European country to support the vote.

Negotiations, Negotiations, Negotiations
As usual, John Baird, Canada’s Foreign Affairs Minister, gave Canada’s speech at the UN denouncing Palestinian attempts to join the UN. The speech had its standard Conservative “talking point”, this time being consistent unqualified reminders about “a two state solution, arrived at through direct negotiations”. To do this, Baird walked his listeners through the seventy year history of UN Resolutions concerning Palestine and Israel, conveniently ignoring the parts of the resolutions that did not suit his purpose but which over-ride his general argument on negotiations.

Perhaps this is because, as he says, the issues “are too intricate and too complex to be resolved by symbolic, unilateral measures.” This of course is the usual political discourse used to intimidate the public into thinking they are not to be part of the process, that better minds are at work. The symbolism of this move could be quite powerful – and indeed the vote tally demonstrates how isolated Israel, Canada, and the U.S. are in their support of Israel’s position. Admittedly many of the other countries will not back up their vote with any further actions to try and force change on Israel, but the emotional mindset, the big idea, is out there loud and clear – Israel is on the wrong path, morally and legally.

As for unilateral measures, Israel and the U.S. both act unilaterally as they perceive it to be in their best interests; there is no reason for a Palestinian leader not to act the same way. Abbas was caught between a rock and a hard place. Hamas had just come away from another confrontation with Israel looking much more the defender and champion of Palestinian rights than the PLO/PA ‘government’ in Ramallah, a government that does not have democratic credentials for its direction as did Hamas.

The problem with negotiations is that they have not worked, at least not for peace. They have worked for Israel as a smokescreen for continued military occupation, annexation, expropriation, and settlement of Palestinian lands and the slow destruction of their culture. All this amounts to ongoing ethnic cleansing. The withdrawal of settlements from Gaza did nothing to change this, as it served as “formaldehyde” on the peace process and allowed the ongoing settlement of the West Bank.

As Baird breezes through the various resolutions since 1947, he gives constant reminders of how each resolution calls for negotiations – to start, to continue, or to be revived. Each subsequent resolution after the initial one also refers back to previous resolutions indicating that they should be fulfilled. What is missing from Baird’s presentation are the elements that are very significant within those resolutions that makes negotiations not quite the main principle Baird offers.

Baird’s first reference is Resolution 181, saying it has never been “fully implemented.” In reality, this resolution was never implemented at all as the Palestinians rejected it and the Jewish settlers and their armed militias, the Haganah and the Irgun, began the ethnic cleansing of Palestinian towns well before Israel unilaterally declared independence in 1948. This is contrary to resolution 181 as it states
The Security Council determine as a threat to the peace, breach of the peace or act of aggression in accordance with Article 39 of the Charter, any attempt to alter by force the settlement envisaged by this resolution.

In effect Resolution 181, with reference to the UN Charter, denies Israel the right to use force to change the situation in Palestine. As history has proven, Israel has used force consistently within the occupied territories, indeed all of historical Palestine, and has used force extensively against external territories as well.

The next reference Is Resolution 194, and yes it says something about negotiations. But more importantly for what Baird has ignored is Article 8 that states that Jerusalem is to be an international city under the control of the UN. And article 9 gives the right of return and compensation for the Palestinian refugees. So if the need to negotiate is sustained through time by further resolutions, Jerusalem being an international city and the right of Palestinian return are also both part of the resolution which is called upon in future resolutions.

Jumping ahead to 1967, Baird refers to Resolution 242, which, yes again, refers to negotiations. The Resolution begins by “Emphasizing the inadmissibility of the acquisition of territory by war” and refers to UN Charter Article 2.4 that says, “All Members shall refrain in their international relations from the threat or use of force against the territorial integrity or political independence of any state, or in any other manner inconsistent with the Purposes of the United Nations,” and states further in article 1.1 “Withdrawal of Israel armed forces from territories occupied in the recent conflict”

If Baird is correct and consistent with his arguments, then Israel should withdraw its armed forces back to the “green line” positions at the beginning of the war – and even that is a grand concession of Palestinian territory to Israel, especially considering the “inadmissibility of the acquisition of territory by war.” This resolution refers to previous resolutions so the positions on Jerusalem and refugee rights still stand.

From that point on, Baird keeps reiterating the negotiation stance while ignoring the other issues presented in the Resolutions. As Baird insists that Resolutions 242 and 338 (after the Yom Kippur war) form the “cornerstone of all subsequent peace commitments” then the articles identified above also need to be implemented. He states that negotiations are a “core principle”, but in reality according to the resolutions themselves negotiation is “immediately and concurrently with” the other principles indicated above.

Next up are the Oslo round of agreements, but the Oslo Accords have been shown to be a front by the U.S. and Israel while land annexations, expropriations, and settlements continued building in occupied Palestinian territory, against the precepts of the UN Charter and Resolutions 242 and 338. Oslo II, in Article 31, under Final Clauses (section 7), stipulates that “Neither side shall initiate or take any step that will change the status of the West Bank and Gaza pending the outcome of the permanent status negotiations.” Of course this is the period when enormous amounts of settler activity in the West Bank occurred and later the democratic elections of Hamas (2006) were annulled, both obvious steps that change the status of the West Bank and Gaza.

Later in 2002, Resolution 1397 calls for the resumption of the peace process, a process by this time recognized to be smoke and mirrors. But it also restates the importance of the earlier resolutions, “Recalling all its previous relevant resolutions, in particular resolutions 242 (1967) and 338 (1973).”

And it goes on through Resolution 1515 and 1850, both reconfirming the earlier resolutions. That being the case, one can hardly wonder why the “negotiations” are emphasized by Israel and Canada. If the other elements of the resolutions were implemented as they should have been and as Baird so vociferously argues for, then Jerusalem would be an international city, the Israeli military would not occupy the West Bank nor turn Gaza into an internment camp, and the Palestinians would have the right of return or compensation for lands stolen and annexed by Israel.

Baird ends his train of thought – a very singular track indeed – with more calls for negotiations and the two state outcome. Both ideas are highly arguable especially now if reference is made to any map that shows the highly non-contiguous nature of what little land is left that is still considered Palestinian. Israel controls all the land and has all the power, backed by the world’s sole superpower, hardly an arrangement under which fair negotiations could occur.

The final argument is a full non-starter – “We call on both sides to return to the negotiating table without preconditions.”
Amazing considering that he has just argued for seventy years of preconditions – all the UN Resolutions so proudly quoted in defence of negotiations, none of which has been fulfilled in any form vis a vis Jerusalem, refugees, occupation, and international and humanitarian war crimes against other states and people.

Is it possible that one citizen or two or a dozen can compensate for Canada’s official stupidity by apology alone? Canada pretends to be a big player on the world scene, with Stephen Harper’s Napoleon complex changing the way Canada interacts in the world. Canada’s threat is “we will be considering all available next steps.” Not much to worry about there, Canada can do nothing alone without the backing of the U.S. and Israel, perhaps withdraw an envoy or two, always a good step in communicating and negotiating.

The majority of Canadians did not vote for Harper, yet he still has a strong majority government in which, ironically, negotiations are not something that are considered to be important. Many Canadians, even on the liberal side of things, are still swayed by the rhetoric of the mainstream media, much of which comes from the U.S. and the third place opposition Liberals also support Canada’s role in voting no to the resolution.

Regardless, from those of us in Canada who do recognize international law and the UN Resolutions as they are written – and not as revised by Canada’s department of Foreign Affairs – we do support the people of Palestine in their ongoing search for peace within their homeland, and freedom from the oppression of a militarized state that has no real interest in accommodating them.

The vote may be symbolic, but symbolism carries a long history and a long memory.

– Jim Miles is a Canadian educator and a regular contributor/columnist of opinion pieces and book reviews to Palestine Chronicles. He contributed this article to PalstineChronicle.com